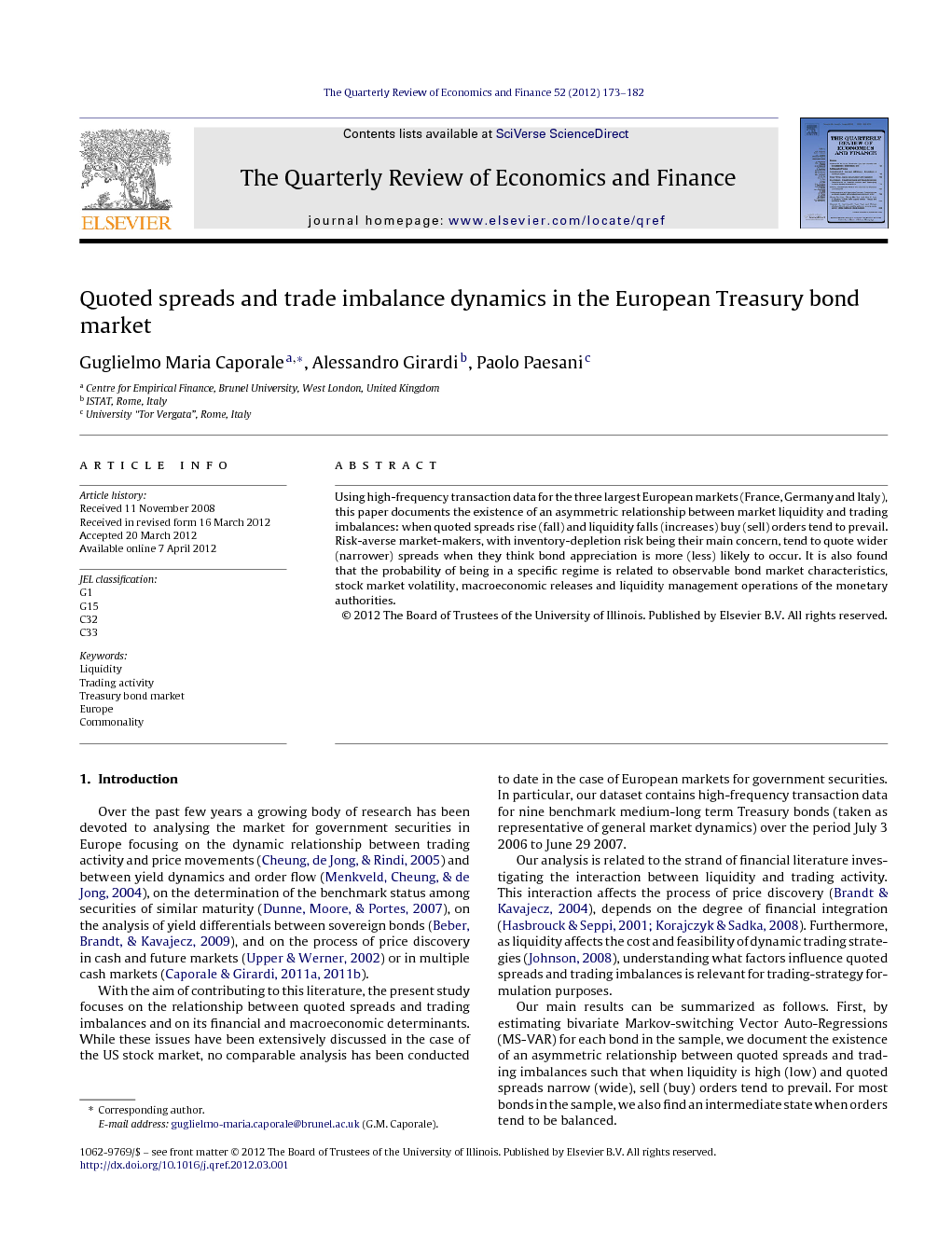 Using high-frequency transaction data for the three largest European markets (France, Germany and Italy), this paper documents the existence of an asymmetric relationship between market liquidity and trading imbalances: when quoted spreads rise (fall) and liquidity falls (increases) buy (sell) orders tend to prevail. Risk-averse market-makers, with inventory-depletion risk being their main concern, tend to quote wider (narrower) spreads when they think bond appreciation is more (less) likely to occur. It is also found that the probability of being in a specific regime is related to observable bond market characteristics, stock market volatility, macroeconomic releases and liquidity management operations of the monetary authorities.

Over the past few years a growing body of research has been devoted to analysing the market for government securities in Europe focusing on the dynamic relationship between trading activity and price movements (Cheung, de Jong, & Rindi, 2005) and between yield dynamics and order flow (Menkveld, Cheung, & de Jong, 2004), on the determination of the benchmark status among securities of similar maturity (Dunne, Moore, & Portes, 2007), on the analysis of yield differentials between sovereign bonds (Beber, Brandt, & Kavajecz, 2009), and on the process of price discovery in cash and future markets (Upper & Werner, 2002) or in multiple cash markets (Caporale and Girardi, 2011a and Caporale and Girardi, 2011b). With the aim of contributing to this literature, the present study focuses on the relationship between quoted spreads and trading imbalances and on its financial and macroeconomic determinants. While these issues have been extensively discussed in the case of the US stock market, no comparable analysis has been conducted to date in the case of European markets for government securities. In particular, our dataset contains high-frequency transaction data for nine benchmark medium-long term Treasury bonds (taken as representative of general market dynamics) over the period July 3 2006 to June 29 2007. Our analysis is related to the strand of financial literature investigating the interaction between liquidity and trading activity. This interaction affects the process of price discovery (Brandt & Kavajecz, 2004), depends on the degree of financial integration (Hasbrouck and Seppi, 2001 and Korajczyk and Sadka, 2008). Furthermore, as liquidity affects the cost and feasibility of dynamic trading strategies (Johnson, 2008), understanding what factors influence quoted spreads and trading imbalances is relevant for trading-strategy formulation purposes. Our main results can be summarized as follows. First, by estimating bivariate Markov-switching Vector Auto-Regressions (MS-VAR) for each bond in the sample, we document the existence of an asymmetric relationship between quoted spreads and trading imbalances such that when liquidity is high (low) and quoted spreads narrow (wide), sell (buy) orders tend to prevail. For most bonds in the sample, we also find an intermediate state when orders tend to be balanced. Second, after daily averaging intra-day probabilities extracted from the estimated MS-VAR models, we investigate common potential determinants for the switches across states by random effect probit-estimation for longitudinal data. We find that the relationship between liquidity and trading imbalances is affected by financial and macroeconomic factors including: refinancing costs, bond and stock market volatility, changing business and macroeconomic climate and changing monetary policy stance. The rest of the paper is organised as follows. Section 2 presents the data and some descriptive statistics. In Section 3 we investigate the dynamic interaction between quoted spreads and order flow imbalances at the individual bond level. Section 4 explores the role of common factors in explaining co-movements between these two market characteristics at an aggregate level. Section 5 offers some concluding remarks.

This paper analyses transaction-based data for Treasury bonds with maturities of 5, 10 and 32 years for the three largest European markets, namely Italy, France and Germany, with the aim of shedding light on the secondary market for Treasury securities in Europe. The MS-VAR estimation results suggest that in abnormal (i.e. very high or very low) market liquidity conditions dealers pay attention to the information revealed by order flows; less so when liquidity is in an intermediate state. Furthermore, the causality nexus between quoted spreads and trading imbalances is a complex one: for a vast majority of bonds, we find bi-directional feedback effects between market characteristics. Ordered probit estimates for longitudinal data indicate that extreme liquidity conditions are likely to occur when refinancing costs are low, according to standard portfolio rebalancing arguments. By exacerbating inventory risk, bond market volatility has a detrimental effect on aggregate liquidity, while bond market returns induce changes in the composition of portfolios. Furthermore, we find that liquidity states evolve counter-cyclically with respect to the sentiment among analysts about the business climate. Higher stock market volatility increases the probability of extreme liquidity conditions and trade-order imbalances. Finally, bond market liquidity reacts positively to an increase in the volume of the marginal lending facility only if the size of the liquidity provision offered by the ECB is above a certain threshold. It is noteworthy that our sample ends a few weeks before the outbreak in 2007 of the current financial turmoil. Although the stochastic properties of financial series during periods of stress are likely to differ substantially from those in normal times, we interpret our findings as indicating that European monetary authorities can provide effective insurance against liquidity evaporation in the euro-denominated government bond market only to the extent that they are willing to increase the monetary base sharply through standard and ad hoc lending facilities. Further work based on an updated sample could shed light on the most recent effects of the financial turmoil on the European Treasury securities market. Another possible extension could also model shifts across liquidity regimes for individual bonds. In this respect, endogenising the MS-VAR estimated transition probabilities (making them dependent on market characteristics as well as on institutional factors) and allowing for MS not only in the intercept, but also in the lagged variables and the variance–covariance matrix could be useful to shed further light on the market microstructure properties of the MTS platform. Finally, depth and price dynamics could be introduced as dependent variables in the MS-VAR estimation in order to assess more accurately whether price dynamics react differently to liquidity in different regimes as in Brandt and Kavajecz (2004). These issues are left for future research.