عنوان انگلیسی
The impact of unconventional monetary policy on the market for collateral: The case of the French bond market
دانلود فوری مقاله + سفارش ترجمه 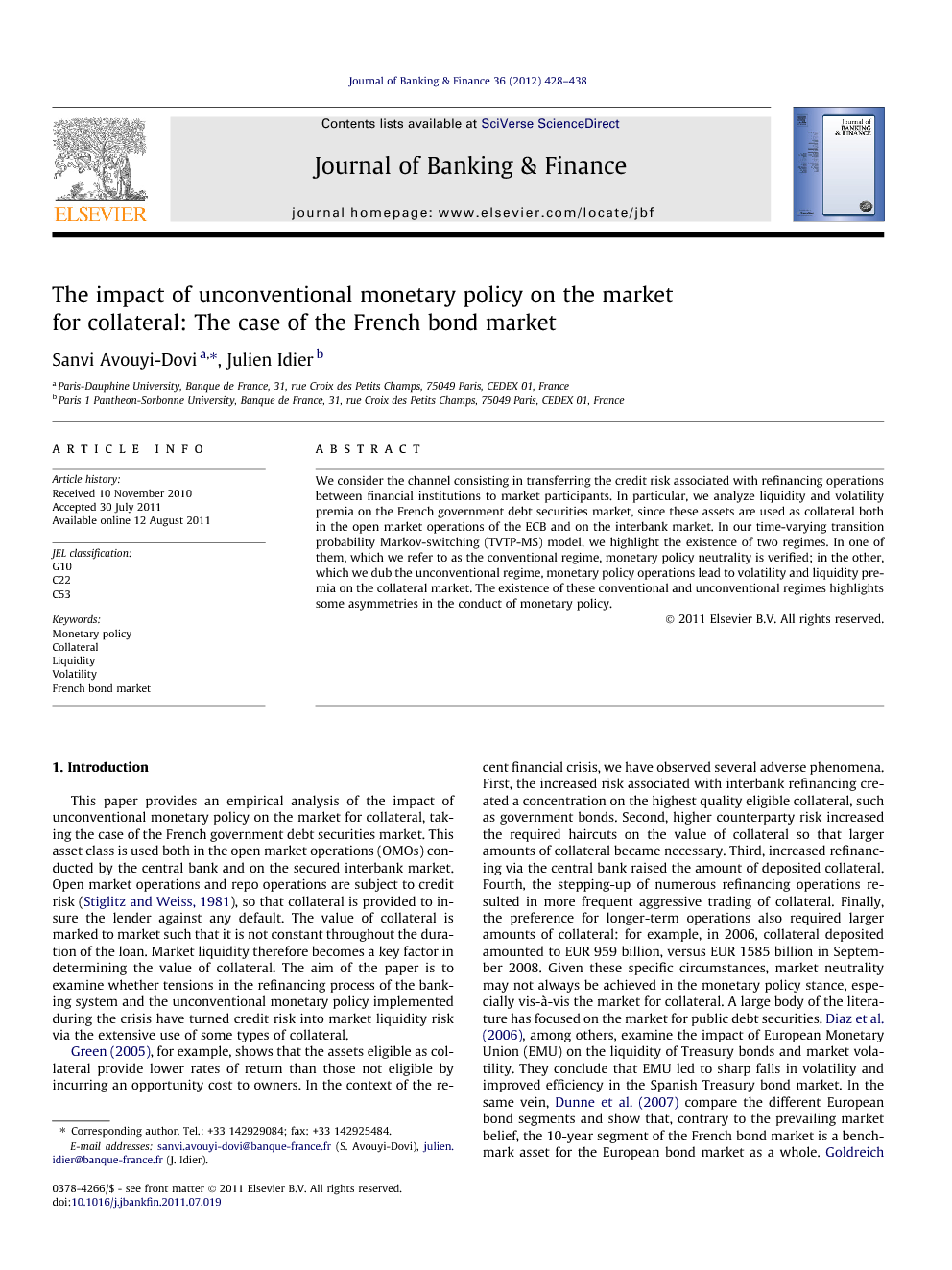 We consider the channel consisting in transferring the credit risk associated with refinancing operations between financial institutions to market participants. In particular, we analyze liquidity and volatility premia on the French government debt securities market, since these assets are used as collateral both in the open market operations of the ECB and on the interbank market. In our time-varying transition probability Markov-switching (TVTP-MS) model, we highlight the existence of two regimes. In one of them, which we refer to as the conventional regime, monetary policy neutrality is verified; in the other, which we dub the unconventional regime, monetary policy operations lead to volatility and liquidity premia on the collateral market. The existence of these conventional and unconventional regimes highlights some asymmetries in the conduct of monetary policy.

This paper provides an empirical analysis of the impact of unconventional monetary policy on the market for collateral, taking the case of the French government debt securities market. This asset class is used both in the open market operations (OMOs) conducted by the central bank and on the secured interbank market. Open market operations and repo operations are subject to credit risk (Stiglitz and Weiss, 1981), so that collateral is provided to insure the lender against any default. The value of collateral is marked to market such that it is not constant throughout the duration of the loan. Market liquidity therefore becomes a key factor in determining the value of collateral. The aim of the paper is to examine whether tensions in the refinancing process of the banking system and the unconventional monetary policy implemented during the crisis have turned credit risk into market liquidity risk via the extensive use of some types of collateral. Green (2005), for example, shows that the assets eligible as collateral provide lower rates of return than those not eligible by incurring an opportunity cost to owners. In the context of the recent financial crisis, we have observed several adverse phenomena. First, the increased risk associated with interbank refinancing created a concentration on the highest quality eligible collateral, such as government bonds. Second, higher counterparty risk increased the required haircuts on the value of collateral so that larger amounts of collateral became necessary. Third, increased refinancing via the central bank raised the amount of deposited collateral. Fourth, the stepping-up of numerous refinancing operations resulted in more frequent aggressive trading of collateral. Finally, the preference for longer-term operations also required larger amounts of collateral: for example, in 2006, collateral deposited amounted to EUR 959 billion, versus EUR 1585 billion in September 2008. Given these specific circumstances, market neutrality may not always be achieved in the monetary policy stance, especially vis-à-vis the market for collateral. A large body of the literature has focused on the market for public debt securities. Diaz et al. (2006), among others, examine the impact of European Monetary Union (EMU) on the liquidity of Treasury bonds and market volatility. They conclude that EMU led to sharp falls in volatility and improved efficiency in the Spanish Treasury bond market. In the same vein, Dunne et al. (2007) compare the different European bond segments and show that, contrary to the prevailing market belief, the 10-year segment of the French bond market is a benchmark asset for the European bond market as a whole. Goldreich et al., 2005 and Fleming, 2003 also focus, precisely, on the liquidity of US Treasuries and its impact on interest rates, as do Chakravarty and Sarkar (1999), who also compare the different bond segments in terms of bid-ask spreads. Our approach is different from previous papers since we explicitly relate French bond market dynamics to the ECB’s unconventional monetary policy. This is also quite different from that of some recent work that develops interesting, promising and coherent macroeconomic models of the unconventional monetary policy of central banks. This research, some of which is an extension of New Keynesian general equilibrium models, is clear and computationally tractable (see among others, Gertler and Karadi, 2011 and Curdia and Woodford, 2010). We do not construct a micro founded model for analysing the effects of unconventional monetary policy on the market for collateral, but rather adopt a reduced empirical assessment of unconventional monetary policy. More specifically, in our paper, we analyze the impact of unconventional monetary policy on the liquidity (bid-ask spreads) and volatility (realized bipower variation from Barndorff-Nielson and Shephard, 2004) of the market for collateral during these unconventional periods. This analysis is based on high-frequency data identifying all quotes for on-the-run 3-month and 10-year French debt securities between 2003 and 2009. We selected on-the-run 3-month and 10-year securities for their representativeness of the short and the long segments of the French market respectively. We consider a time-varying transition probability Markov-switching vector autoregressive (TVTP-MS-VAR) model (Filardo and Gordon, 1998). In our case, the transition probabilities are governed both by the cycle of monetary policy operations and the cycle of French Treasury auctions of 10-year notes and 3-month bills. Our main findings are as follows. First, the stepping-up of special refinancing operations with high bid-to-cover ratios makes more probable the emergence of an unconventional regime in which liquidity and volatility premia appear with, in parallel, the segmentation of the bond market. Second, regime identification shows the potential asymmetry in the monetary policy stance between conventional and unconventional regimes, where the same decision (for example more frequent open market operations (OMOs) and loose liquidity provision) may have positive or negative effects depending on the regime markets are in. The paper is organized as follows. In the next section, we propose a brief review of the implementation of unconventional monetary policy and of developments in the French sovereign bond market. In the third section, we define indicators of liquidity and volatility and present the models. The fourth section discusses the empirical results and sheds light on their monetary policy implications. Section 5 concludes.