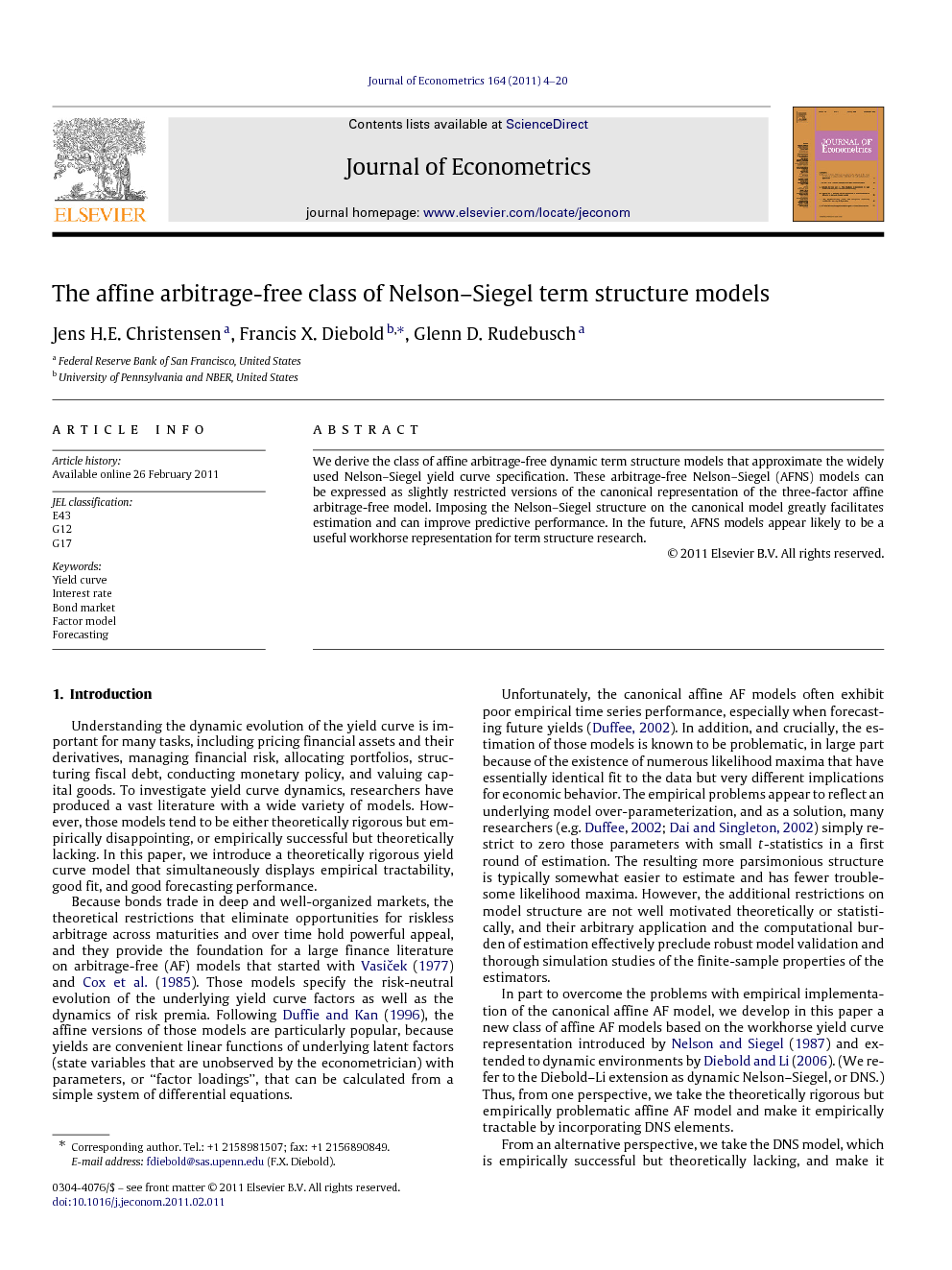 Understanding the dynamic evolution of the yield curve is important for many tasks, including pricing financial assets and their derivatives, managing financial risk, allocating portfolios, structuring fiscal debt, conducting monetary policy, and valuing capital goods. To investigate yield curve dynamics, researchers have produced a vast literature with a wide variety of models. However, those models tend to be either theoretically rigorous but empirically disappointing, or empirically successful but theoretically lacking. In this paper, we introduce a theoretically rigorous yield curve model that simultaneously displays empirical tractability, good fit, and good forecasting performance. Because bonds trade in deep and well-organized markets, the theoretical restrictions that eliminate opportunities for riskless arbitrage across maturities and over time hold powerful appeal, and they provide the foundation for a large finance literature on arbitrage-free (AF) models that started with Vasiček (1977) and Cox et al. (1985). Those models specify the risk-neutral evolution of the underlying yield curve factors as well as the dynamics of risk premia. Following Duffie and Kan (1996), the affine versions of those models are particularly popular, because yields are convenient linear functions of underlying latent factors (state variables that are unobserved by the econometrician) with parameters, or “factor loadings”, that can be calculated from a simple system of differential equations. Unfortunately, the canonical affine AF models often exhibit poor empirical time series performance, especially when forecasting future yields (Duffee, 2002). In addition, and crucially, the estimation of those models is known to be problematic, in large part because of the existence of numerous likelihood maxima that have essentially identical fit to the data but very different implications for economic behavior. The empirical problems appear to reflect an underlying model over-parameterization, and as a solution, many researchers (e.g. Duffee, 2002 and Dai and Singleton, 2002) simply restrict to zero those parameters with small tt-statistics in a first round of estimation. The resulting more parsimonious structure is typically somewhat easier to estimate and has fewer troublesome likelihood maxima. However, the additional restrictions on model structure are not well motivated theoretically or statistically, and their arbitrary application and the computational burden of estimation effectively preclude robust model validation and thorough simulation studies of the finite-sample properties of the estimators. In part to overcome the problems with empirical implementation of the canonical affine AF model, we develop in this paper a new class of affine AF models based on the workhorse yield curve representation introduced by Nelson and Siegel (1987) and extended to dynamic environments by Diebold and Li (2006). (We refer to the Diebold–Li extension as dynamic Nelson–Siegel, or DNS.) Thus, from one perspective, we take the theoretically rigorous but empirically problematic affine AF model and make it empirically tractable by incorporating DNS elements. From an alternative perspective, we take the DNS model, which is empirically successful but theoretically lacking, and make it rigorous by imposing absence of arbitrage. This rigor is important because the Nelson–Siegel model is extremely popular in practice, among both financial market practitioners and central banks (e.g., Svensson, 1995, Bank for International Settlements, 2005 and Gürkaynak et al., 2007). DNS’s popularity stems from several sources, both empirical and theoretical, as discussed in Diebold and Li (2006). Empirically, the DNS model is simple and stable to estimate, and it is quite flexible and fits both the cross-section and time series of yields remarkably well, in many countries and periods, and for many grades of bonds. Theoretically, DNS imposes certain economically desirable properties, such as requiring the discount function to approach zero with maturity, and Diebold and Li (2006) show that it corresponds to a modern three-factor model of time-varying level, slope and curvature. However, despite its good empirical performance and a certain amount of theoretical appeal, DNS fails on an important theoretical dimension: it does not impose the restrictions necessary to eliminate opportunities for riskless arbitrage (e.g. Filipović, 1999 and Diebold et al., 2005). This motivates us in this paper to introduce the class of AF Nelson–Siegel (AFNS) models, which are affine AF term structure models that maintain the DNS factor loading structure. In short, the AFNS models proposed here combine the best of the AF and DNS traditions. Approached from the AF side, they maintain the AF theoretical restrictions of the canonical affine models but can be easily estimated, because the dynamic Nelson–Siegel structure helps to identify the latent yield curve factors and delivers analytical solutions (which we provide) for zero-coupon bond prices. Approached from the DNS side, they maintain the simplicity and empirical tractability of the popular DNS models, while simultaneously enforcing the theoretically desirable property of absence of riskless arbitrage. After deriving the new class of AFNS models, we examine their in-sample fit and out-of-sample forecast performance relative to standard DNS models. For both the DNS and the AFNS models, we estimate parsimonious and flexible versions (with both independent factors and more richly parameterized correlated factors). We find that the flexible versions of both models are preferred for in-sample fit, but that the parsimonious versions exhibit significantly better out-of-sample forecast performance. As a final comparison, we also show that an AFNS model can outperform the canonical affine AF model in forecasting. We proceed as follows. First we present the main theoretical results of the paper; in Section 2 we derive the AFNS class of models, and in Section 3 we characterize the precise relationship between the AFNS class and the canonical representation of affine AF models. We next provide an empirical analysis of four leading DNS and AFNS models, incorporating both parsimonious and flexible versions; in Section 4 we examine in-sample fit, and in Section 5 we examine out-of-sample forecasting performance. We conclude in Section 6, and we provide proofs and additional technical details in several appendices.

Asset pricing, portfolio allocation, and risk management are fundamental tasks in financial asset markets. For fixed income securities, superior yield curve modeling translates into superior pricing, portfolio returns, and risk management. Accordingly, we have focused on two important and successful yield curve literature: the Nelson–Siegel empirically based one and the no-arbitrage theoretically based one. Yield curve models in both of these traditions are impressive successes, albeit for very different reasons. Ironically, both approaches are equally impressive failures, and for the same reasons, swapped. That is, models in the Nelson–Siegel tradition fit and forecast well, but they lack theoretical rigor insofar as they admit arbitrage possibilities. Conversely, models in the arbitrage-free tradition are theoretically rigorous insofar as they enforce absence of arbitrage, but they fit and forecast poorly. We have bridged the divide, proposing Nelson–Siegel-inspired models that enforce absence of arbitrage. We analyzed our models theoretically, relating them to the canonical (Dai and Singleton, 2000) representation of three-factor arbitrage-free affine models. We also analyzed our models empirically, both in terms of in-sample fit and out-of-sample prediction. As regards in-sample fit, we showed that the Nelson–Siegel parameter restrictions greatly facilitate estimation, enabling one to escape the challenging A0(3)A0(3) estimation environment in favor of the simple and robust AFNS environment, and that the data strongly favor the correlated-factor AFNS specification. As regards out-of-sample prediction, we showed that the tables are turned: the more parsimonious independent-factor models fare better. The results also suggest that gains may be achieved by imposing absence of arbitrage, particularly for moderate to long yield maturities and forecast horizons, although the evidence is much less conclusive than for in-sample fit. All told, the independent-factor AFNS model fares well in out-of-sample prediction, consistently outperforming, for example, the canonical A0(3)A0(3). Going forward, this new AFNS structure appears likely to be a useful representation for term structure research, as its embedded three-factor structure (level, slope, curvature) maintains fidelity to key aspects of term-structure data that have been recognized at least since Litterman and Scheinkman (1991), while simultaneously imposing absence of arbitrage. On the theoretical side, it has recently been significantly enriched to include nonlinear regime-switching dynamics by Zantedeschi et al. (2009). On the applied side, it has recently been extended in Christensen et al. (2010) to provide a joint empirical model of nominal and real yield curves and in Christensen et al. (2009) to model the interbank lending market.