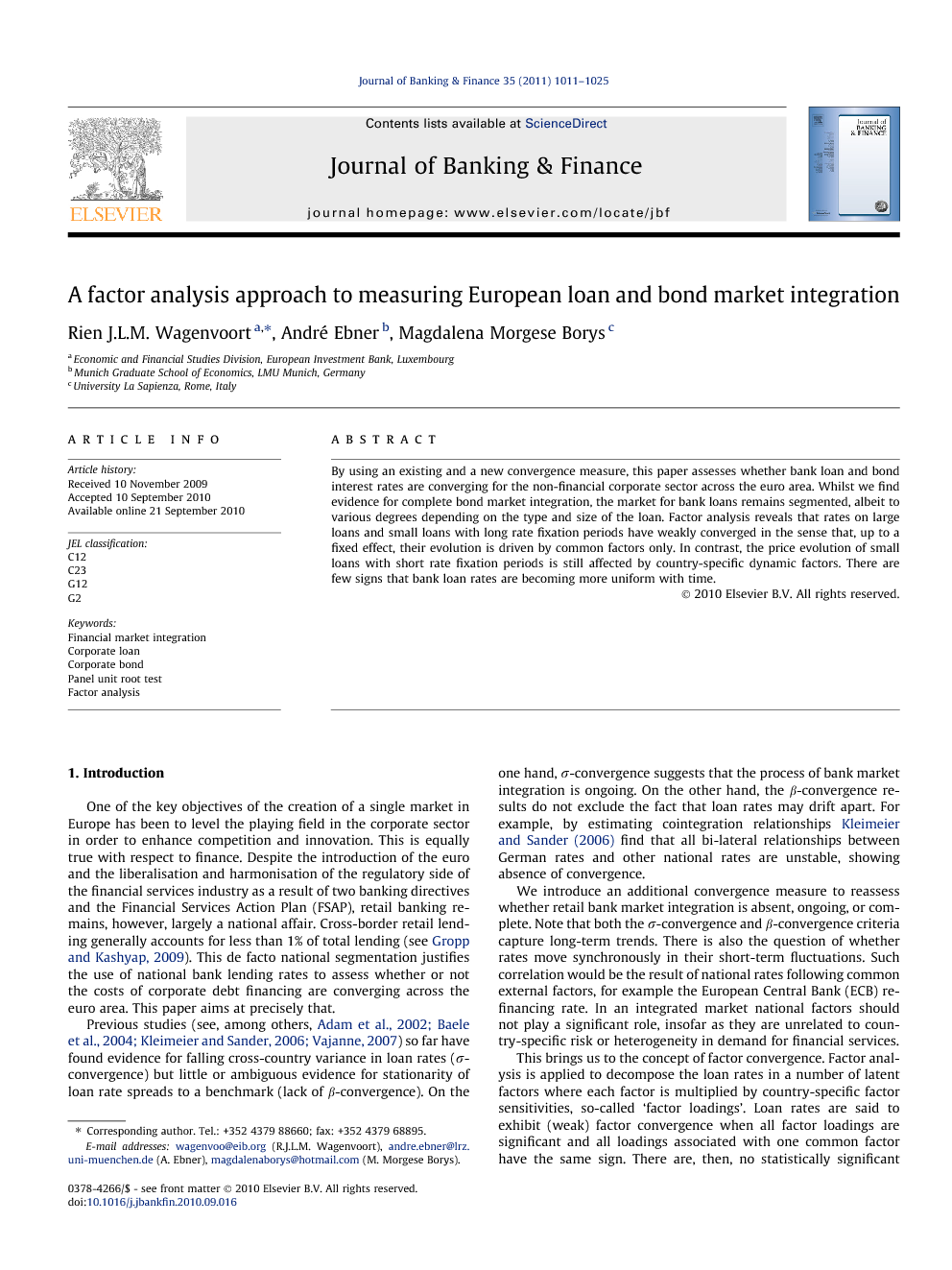 By using an existing and a new convergence measure, this paper assesses whether bank loan and bond interest rates are converging for the non-financial corporate sector across the euro area. Whilst we find evidence for complete bond market integration, the market for bank loans remains segmented, albeit to various degrees depending on the type and size of the loan. Factor analysis reveals that rates on large loans and small loans with long rate fixation periods have weakly converged in the sense that, up to a fixed effect, their evolution is driven by common factors only. In contrast, the price evolution of small loans with short rate fixation periods is still affected by country-specific dynamic factors. There are few signs that bank loan rates are becoming more uniform with time.

The novelty of this study is the use it makes of factor analysis to compare NFC borrowing costs in the euro area. Our sample of 828 bond issues suggests that integration of the primary euro-denominated bond market is complete; there is evidence of α-convergence, β-convergence, strong factor convergence, and absence of σ-convergence. In contrast, the market for bank loans remains segmented albeit to various degrees depending on the type and size of the loan. We find that rates on large bank loans and small bank loans with long rate fixation periods exhibit weak factor convergence in the sense that, up to a fixed effect, they are driven by common factors only. In contrast, the evolution of short small loan rates is still affected by country-specific dynamic factors. To the extent that loans with short rate fixation periods contain a larger share of working capital type of financing than loans with long rate fixation periods, short small loans are more susceptible to information problems and, therefore, possibly to distortions in loan pricing. The factor convergence results resolve some of the ambiguity that follows from β-convergence results which are sensitive to the type of the panel unit root test used. Notable differences remain in the average cost of bank loans across the euro area, in particular for small loans with short rate fixation periods where some differences are to the order of almost 200 basis points even after adjusting rates for macroeconomic conditions such as systematic risk and inflation. α-convergence is rejected for all loan categories. There are few signs that bank loan rates are becoming more uniform with time. In 2008 the cross-country variance in loan rates increased as a result of the financial and economic crisis, bringing σ-levels on short loans back to pre-2003 values. There is some evidence of σ-convergence for long large loans albeit with rates converging at low speed. To conclude, small businesses do not experience a level playing field in their debt financing costs, in particular with respect to the financing of working capital, and there are few signs of improvement. Additional policy efforts are therefore needed to make retail bank markets more competitive.