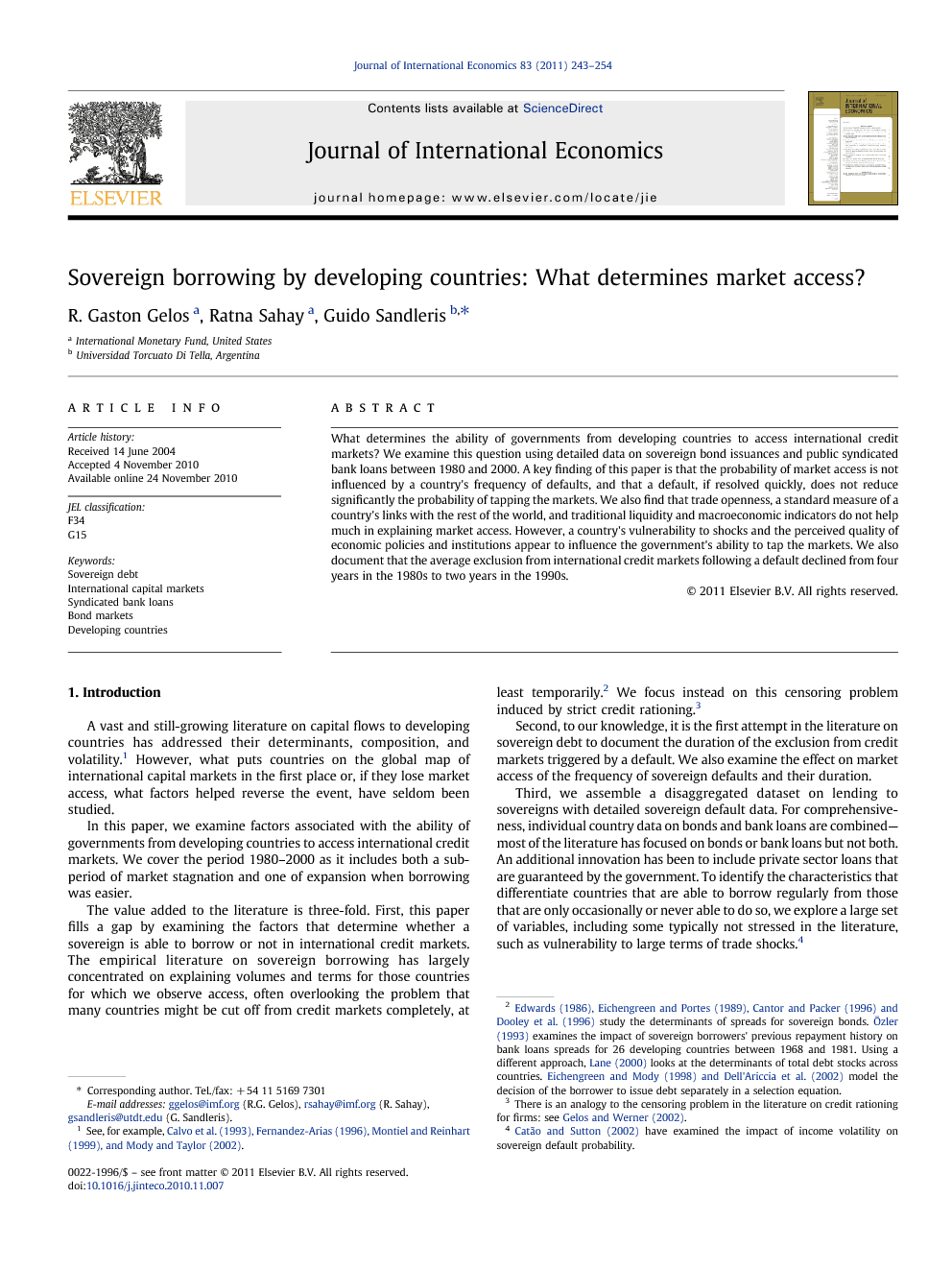 What determines the ability of governments from developing countries to access international credit markets? We examine this question using detailed data on sovereign bond issuances and public syndicated bank loans between 1980 and 2000. A key finding of this paper is that the probability of market access is not influenced by a country's frequency of defaults, and that a default, if resolved quickly, does not reduce significantly the probability of tapping the markets. We also find that trade openness, a standard measure of a country's links with the rest of the world, and traditional liquidity and macroeconomic indicators do not help much in explaining market access. However, a country's vulnerability to shocks and the perceived quality of economic policies and institutions appear to influence the government's ability to tap the markets. We also document that the average exclusion from international credit markets following a default declined from four years in the 1980s to two years in the 1990s.

A vast and still-growing literature on capital flows to developing countries has addressed their determinants, composition, and volatility.1 However, what puts countries on the global map of international capital markets in the first place or, if they lose market access, what factors helped reverse the event, have seldom been studied. In this paper, we examine factors associated with the ability of governments from developing countries to access international credit markets. We cover the period 1980–2000 as it includes both a sub-period of market stagnation and one of expansion when borrowing was easier. The value added to the literature is three-fold. First, this paper fills a gap by examining the factors that determine whether a sovereign is able to borrow or not in international credit markets. The empirical literature on sovereign borrowing has largely concentrated on explaining volumes and terms for those countries for which we observe access, often overlooking the problem that many countries might be cut off from credit markets completely, at least temporarily.2 We focus instead on this censoring problem induced by strict credit rationing.3 Second, to our knowledge, it is the first attempt in the literature on sovereign debt to document the duration of the exclusion from credit markets triggered by a default. We also examine the effect on market access of the frequency of sovereign defaults and their duration. Third, we assemble a disaggregated dataset on lending to sovereigns with detailed sovereign default data. For comprehensiveness, individual country data on bonds and bank loans are combined—most of the literature has focused on bonds or bank loans but not both. An additional innovation has been to include private sector loans that are guaranteed by the government. To identify the characteristics that differentiate countries that are able to borrow regularly from those that are only occasionally or never able to do so, we explore a large set of variables, including some typically not stressed in the literature, such as vulnerability to large terms of trade shocks.4 Any study of the ability of countries to borrow based on observed flows faces the issue of identifying supply versus demand shifts, a notoriously difficult feat. We attempt to address this task by taking a series of sequential steps aimed at distinguishing between actual rationing by creditors and voluntary abstention of borrowers. We acknowledge that this as a modest first step in overcoming this problem, and focus more on descriptive statistics and on documenting correlations. We find, as expected, that governments of larger and richer countries access the markets more frequently. Countries that do not access the markets usually suffer from worse economic policies and institutions, and are more vulnerable to external shocks. However, there is little evidence that trade openness, a standard measure of a country's links with the rest of the world, and traditional macroeconomic indicators matter. We also analyze the relationship between defaults and market access. While being in default usually prevents a country from accessing the markets during those years, the probability of market access is not influenced by a country's frequency of defaults. We also find that a recent default, if resolved quickly, does not reduce significantly the probability of tapping the markets. We document that the average length of the period from default till re-access to international credit markets was four and a half years for the whole sample period. However, we find that it fell substantially in the 1990s. While governments that had defaulted on their debt in the 1980s were unable to access the market for four years on average, during the 1990s the average was two years. The paper is organized as follows. Section 2 discusses the data and the empirical strategy. Section 3 presents the results of the cross-sectional and panel data analysis. Section 4 concludes.

There are six key findings of this study: First, larger and wealthier countries borrow more and more often. In fact, population and GDP per capita alone explain a considerable fraction of the total variation of market access across countries. Second, the perceived quality of policies and institutions matters substantially. In addition, the Institutional Investor Index captures well the additional element of “market perceptions” beyond standard measurable country characteristics and has a positive effect on market access. Third, countries that are more vulnerable to shocks are less likely to be able to tap international credit markets. Fourth, higher shares of FDI investments in GDP are generally associated with higher access by sovereigns. However, contrary to a-priori expectations, a country's trade integration with the rest of the world is not. Fifth, after the perceived quality of policies is controlled for, we do not find a clear catalytic effect of IMF programs. This, of course, has to be qualified by the fact that the perceptions of policies themselves are likely to be affected by the presence of an IMF program. Finally, the probability of market access is not influenced by the frequency of default events, and a default, if resolved quickly does not reduce the probability of tapping the markets