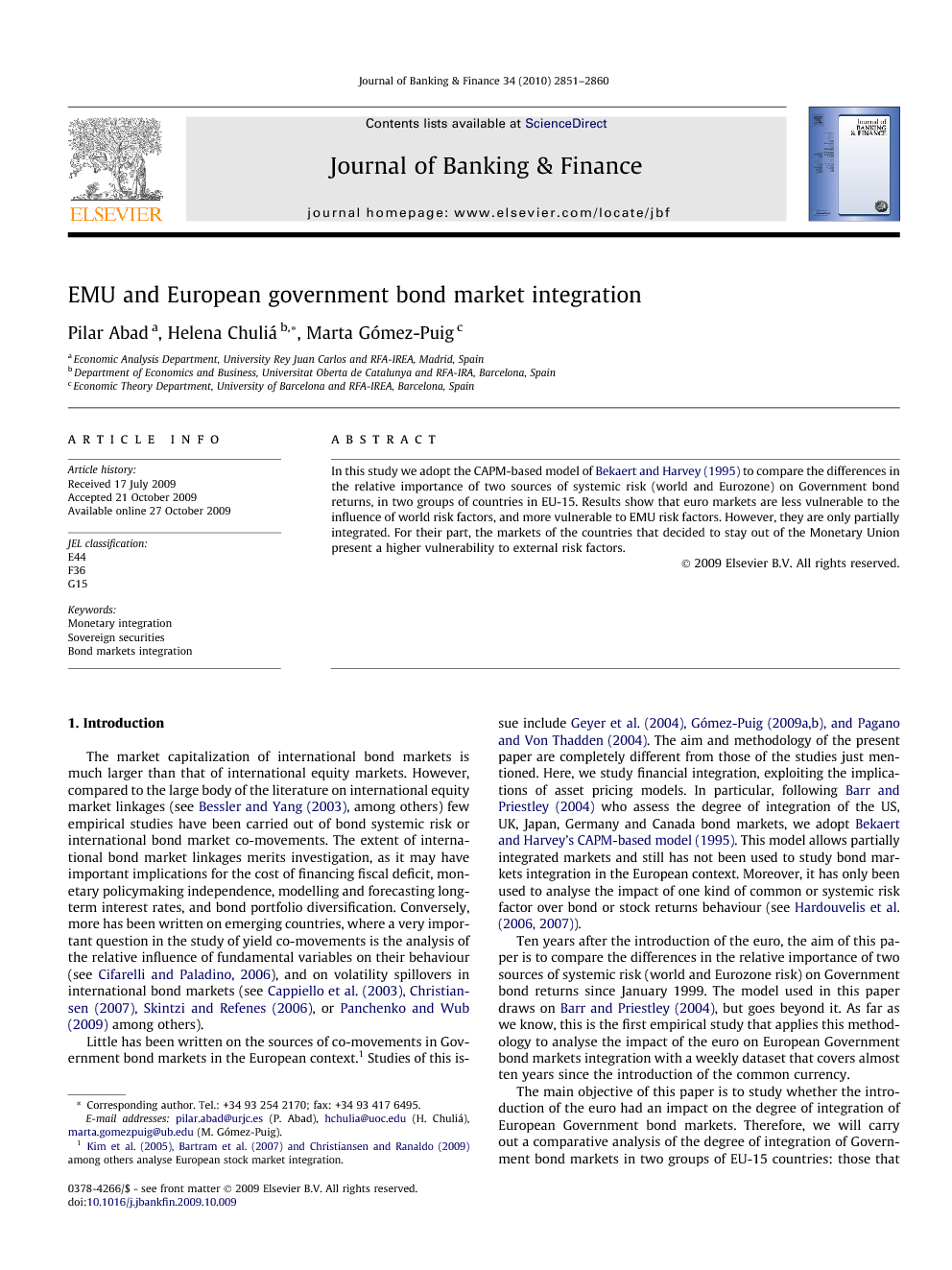 In this study we adopt the CAPM-based model of Bekaert and Harvey (1995) to compare the differences in the relative importance of two sources of systemic risk (world and Eurozone) on Government bond returns, in two groups of countries in EU-15. Results show that euro markets are less vulnerable to the influence of world risk factors, and more vulnerable to EMU risk factors. However, they are only partially integrated. For their part, the markets of the countries that decided to stay out of the Monetary Union present a higher vulnerability to external risk factors.

The market capitalization of international bond markets is much larger than that of international equity markets. However, compared to the large body of the literature on international equity market linkages (see Bessler and Yang (2003), among others) few empirical studies have been carried out of bond systemic risk or international bond market co-movements. The extent of international bond market linkages merits investigation, as it may have important implications for the cost of financing fiscal deficit, monetary policymaking independence, modelling and forecasting long-term interest rates, and bond portfolio diversification. Conversely, more has been written on emerging countries, where a very important question in the study of yield co-movements is the analysis of the relative influence of fundamental variables on their behaviour (see Cifarelli and Paladino, 2006), and on volatility spillovers in international bond markets (see Cappiello et al., 2003, Christiansen, 2007 and Skintzi and Refenes, 2006, or Panchenko and Wub (2009) among others). Little has been written on the sources of co-movements in Government bond markets in the European context.1 Studies of this issue include Geyer et al., 2004, Gómez-Puig, 2009a, Gómez-Puig, 2009b and Pagano and von Thadden, 2004. The aim and methodology of the present paper are completely different from those of the studies just mentioned. Here, we study financial integration, exploiting the implications of asset pricing models. In particular, following Barr and Priestley (2004) who assess the degree of integration of the US, UK, Japan, Germany and Canada bond markets, we adopt Bekaert and Harvey’s CAPM-based model (1995). This model allows partially integrated markets and still has not been used to study bond markets integration in the European context. Moreover, it has only been used to analyse the impact of one kind of common or systemic risk factor over bond or stock returns behaviour (see Hardouvelis et al., 2006 and Hardouvelis et al., 2007). Ten years after the introduction of the euro, the aim of this paper is to compare the differences in the relative importance of two sources of systemic risk (world and Eurozone risk) on Government bond returns since January 1999. The model used in this paper draws on Barr and Priestley (2004), but goes beyond it. As far as we know, this is the first empirical study that applies this methodology to analyse the impact of the euro on European Government bond markets integration with a weekly dataset that covers almost ten years since the introduction of the common currency. The main objective of this paper is to study whether the introduction of the euro had an impact on the degree of integration of European Government bond markets. Therefore, we will carry out a comparative analysis of the degree of integration of Government bond markets in two groups of EU-15 countries: those that joined the European Monetary Union (EMU) and those that stayed out. Our sample will span the period since the beginning of Currency Union until June 2008. Our intention is to separate each individual country’s Government bond return into three effects: a local (own country) effect, a regional (Eurozone) effect, and a global (world) effect, and to establish whether there are significant differences between EMU and non-EMU participating countries. That is, we analyse whether participation in the Monetary Union is an important factor which determines the differences in the impact of world and regional risk on each EU-15 Government bond market. The rest of the paper is organized as follows. Section 2 summarizes the related literature. The model is explained in Section 3. The instrumental variables and data are described in Section 4. Section 5 reports the results and, finally, Section 6 draws the main conclusions.

In this paper we analyse the impact of Monetary Union on European debt market integration. We look at integration both with world debt markets and with Eurozone debt markets. To do this, we separate each individual country’s Government bond return into three effects: a local (own country) effect, a regional (Eurozone) effect, and a global (world) effect. We examine whether there are significant differences between two different groups of European countries: those that joined the euro in 1999 and those that did not. The objective is to explore whether participation in the Monetary Union is an important factor that determines the difference in the impact of world and regional risk on each European Government bond market. Our sample period goes from January 1999 to June 2008, covering almost ten years since the introduction of the common currency. We use Bekaert and Harvey’s CAPM-based model (1995). This is the first time that this methodology has been used to analyse the differences in the relative importance of two sources of risk, systemic and idiosyncratic. In contrast to the previous literature, which has focused only on one kind of systemic risk, we distinguish between the world and the Eurozone risk. The most important results of the paper are the following. First, the results show that apart from a set of world (regional) instruments, a set of local instruments are also able to predict local bond returns. This result suggests incomplete integration. Second, we find that EMU and US Government bond markets present a low degree of integration, indicating that it is domestic rather than international risk factors that mostly drive the evolution of government debt returns in EMU countries. Third, the results show that the degree of integration with the US and German bond markets clearly differs between euro and non-euro participating countries. Government bond returns of non-EMU countries are more influenced by world risk factors. This result agrees with Gómez-Puig (2009b) and indicates that these countries present a higher vulnerability to external risk factors. On the other hand, Government bond returns of EMU countries are more influenced by Eurozone risk factors. In spite of this, EMU countries are only partially integrated with the German market since their markets are still segmented and present differences in their market liquidity or default risk. In a different context, Laopodis (2008) reached the same conclusion, suggesting that benefits from portfolio diversification are still possible within Monetary Union.