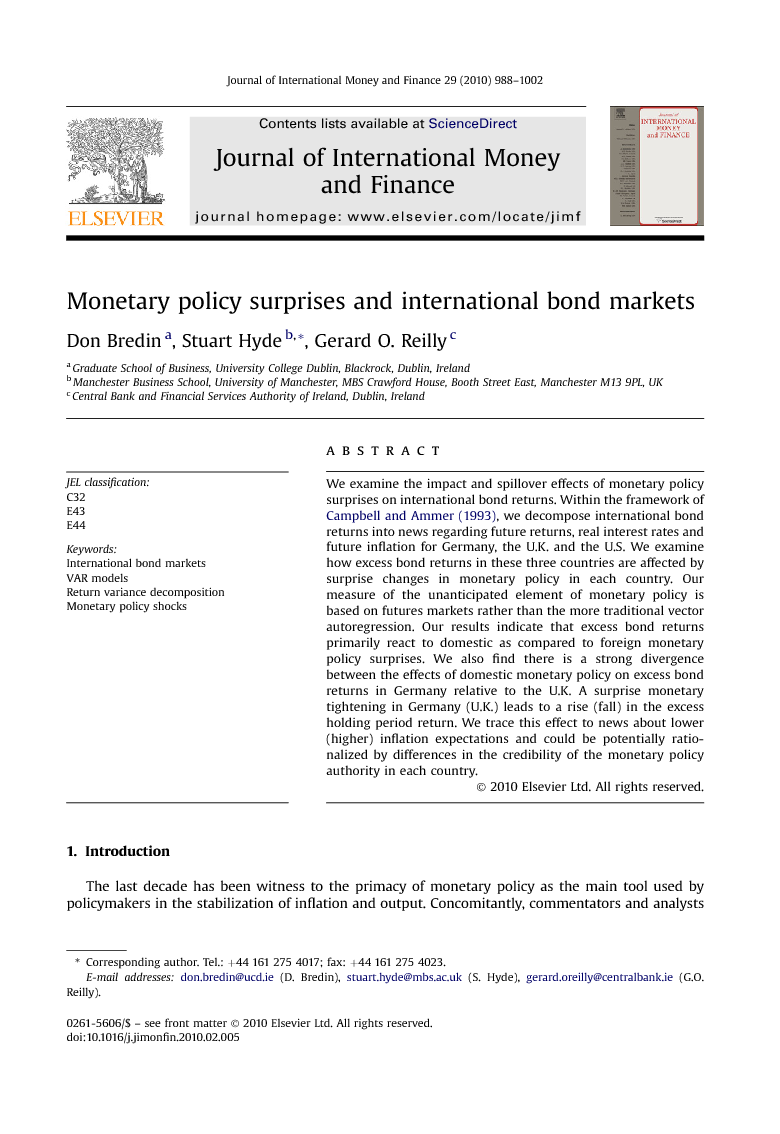 This paper examines the impact and possible spillovers effects of unanticipated monetary policy on international bond returns. Further, we decompose the response of bond returns to monetary policy surprises to delve deeper into the reasons behind such responses. We seek to assess the impact of surprise changes in monetary policy on revisions in expectations regarding excess bond returns and their constituent components for each country, enabling us to identify whether the response is due to revisions in expectations regarding future excess returns, future real interest rates or future inflation. The VAR model uncovers evidence of U.S. spillovers in both Germany and the U.K., with U.S. excess returns having a significant impact on German excess returns, German real short rates and both the U.K. and German spreads. However, somewhat surprisingly, when we investigate the effect of a U.S. monetary policy surprise there is no statistically significant impact on any of the three countries' excess bond returns or their individual components. This result contrasts with the widely-held belief that U.S. monetary policy has a strong influence on global bond returns. This suggests any impact is confined to high-frequency intra-day adjustments which cannot be uncovered at the daily frequency. Importantly, we demonstrate that there is a significant rise in German excess bond returns in response to a surprise domestic monetary tightening as future inflation expectations are revised significantly downwards. This potentially suggests a credible German (Euro area) monetary policy with a surprise tightening in the policy rate leading to lower inflation expectations. Conversely, we observe that a surprise tightening by the Bank of England has a significant negative effect on news regarding current excess bond returns in the U.K. It appears that an unanticipated monetary tightening in the U.K. leads to higher inflation expectations and hence declining excess returns. Our results for the U.K. are consistent for samples that focus purely on post Bank of England independence. Our results infer that the Bank of England has not yet been successful at establishing credibility in relation to fighting inflation.