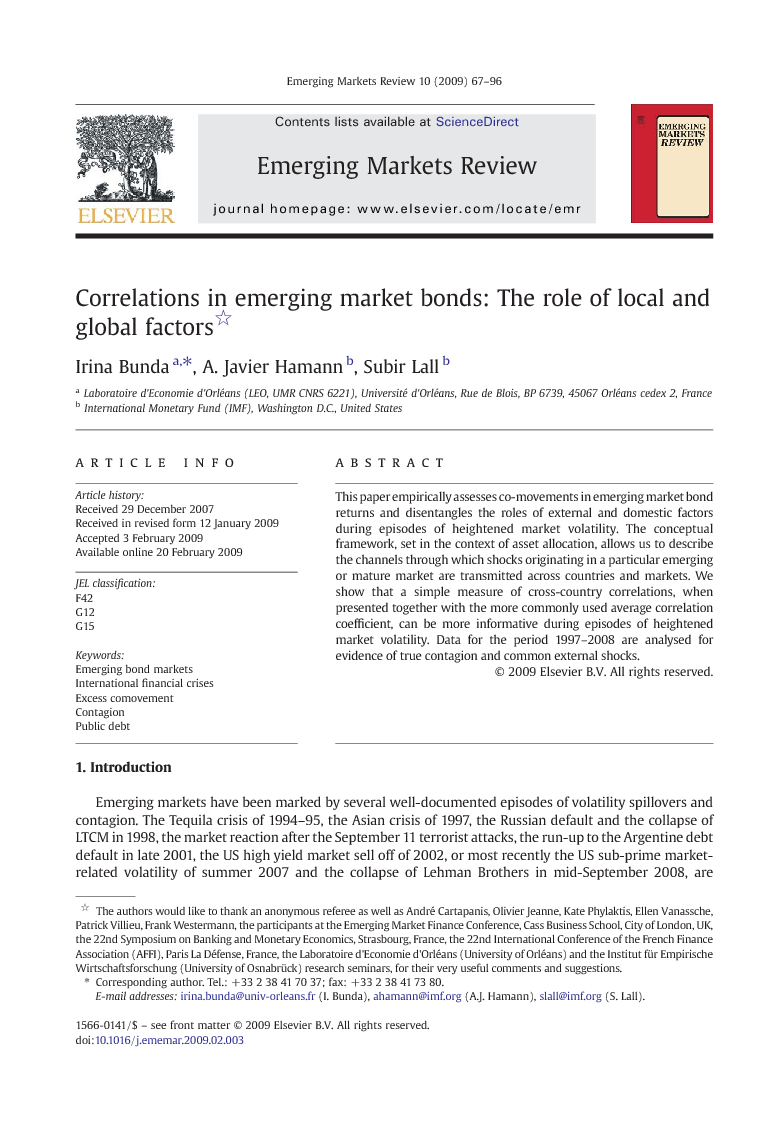 This paper empirically assesses co-movements in emerging market bond returns and disentangles the roles of external and domestic factors during episodes of heightened market volatility. The conceptual framework, set in the context of asset allocation, allows us to describe the channels through which shocks originating in a particular emerging or mature market are transmitted across countries and markets. We show that a simple measure of cross-country correlations, when presented together with the more commonly used average correlation coefficient, can be more informative during episodes of heightened market volatility. Data for the period 1997–2008 are analysed for evidence of true contagion and common external shocks.

The objective of the present paper is to assess the respective part of common external factors and market behaviour in explaining co-movements in emerging bond returns. We propose a conceptual framework based on the evolution of EM spreads and aggregate correlations in order to characterize investors' attitudes towards risk in EM, highlight the potential sources of risks to the EM class and distinguish between external and country specific driven co-movement. Our analysis covers 18 out of 33 emerging countries initially included in the EMBI Global over the period March 1997 to end October 2008. In order to disentangle the roles of common external and idiosyncratic factors in explaining bond markets co-movement, we perform 60-day rolling regressions of initial emerging bond returns against three external factors (US-TB, SPX and HY Indexes). The correlation coefficients of residuals thus become a measure of the excess-co-movement of emerging bond markets, the co-movement unexplained by common external factors and generally attributed to market behaviour. We find evidence of pure contagion (excess co-movement) in the case of the Hong-Kong market crash of October 1997, the Russian crisis and the collapse of LTCM collapse in 1998 and Argentinean crisis of 2001. We also find that adjusted correlations, as measure of “pure contagion”, systematically decline from 1997 through mid-September 2008 (Fig. 2 in Section 4.1). At the same time, the widening gap between adjusted and unadjusted average correlations from 2003 until the financial crisis deepening during fall 2008, suggests that the comovement of EMs returns appears to be less specific to particular EMs, driven more by external events, and that “pure” contagion during this period was very low. Moreover, the dramatic decline in spreads of emerging markets can be attributed to a large extent to improving country fundamentals across the range of emerging market countries over this period. This leads us to conclude that over the past few years and until the recent events of the fall 2008, investors seemed to have better differentiated between individual emerging countries, as confirmed by decreasing and very low average correlations and spreads, although some pairwise correlations have remained high, even during the recent period. This suggests that the distribution of bond returns is not unimodal and that there are underlying groups characterized by high within-group comovement. The opposite evolution of the underlying groups during periods of turbulence in financial markets could then explain the very low levels recently reached by the aggregate average correlations. The extended period of low correlations appears to have ended in September 2008, coinciding with the financial turbulence associated with the collapse of Lehman Brothers. Both unadjusted–and subsequently adjusted–correlations rose sharply in the aftermath, indicating that the common global shock explained much of the rise in emerging market bond volatility, and that investors' discrimination across emerging markets diminished in the period around late October 2008. Nonetheless, average correlations method may not be useful in summarizing market outcomes if the underlying distribution of bond returns is not unimodal. In an extension to this framework, we have used several methods on a year-to-year basis in order to identify periods where the “two-tier paradigm” of emerging markets prevails and found evidence of increased market tiering from 2003 to 2005 (Bunda et al., 2005). The “core” group (of high variance) driving the main part of the co-movement is made mainly of sub-investment grade bonds whereas the low variance group is composed of bonds rated as investment grade.