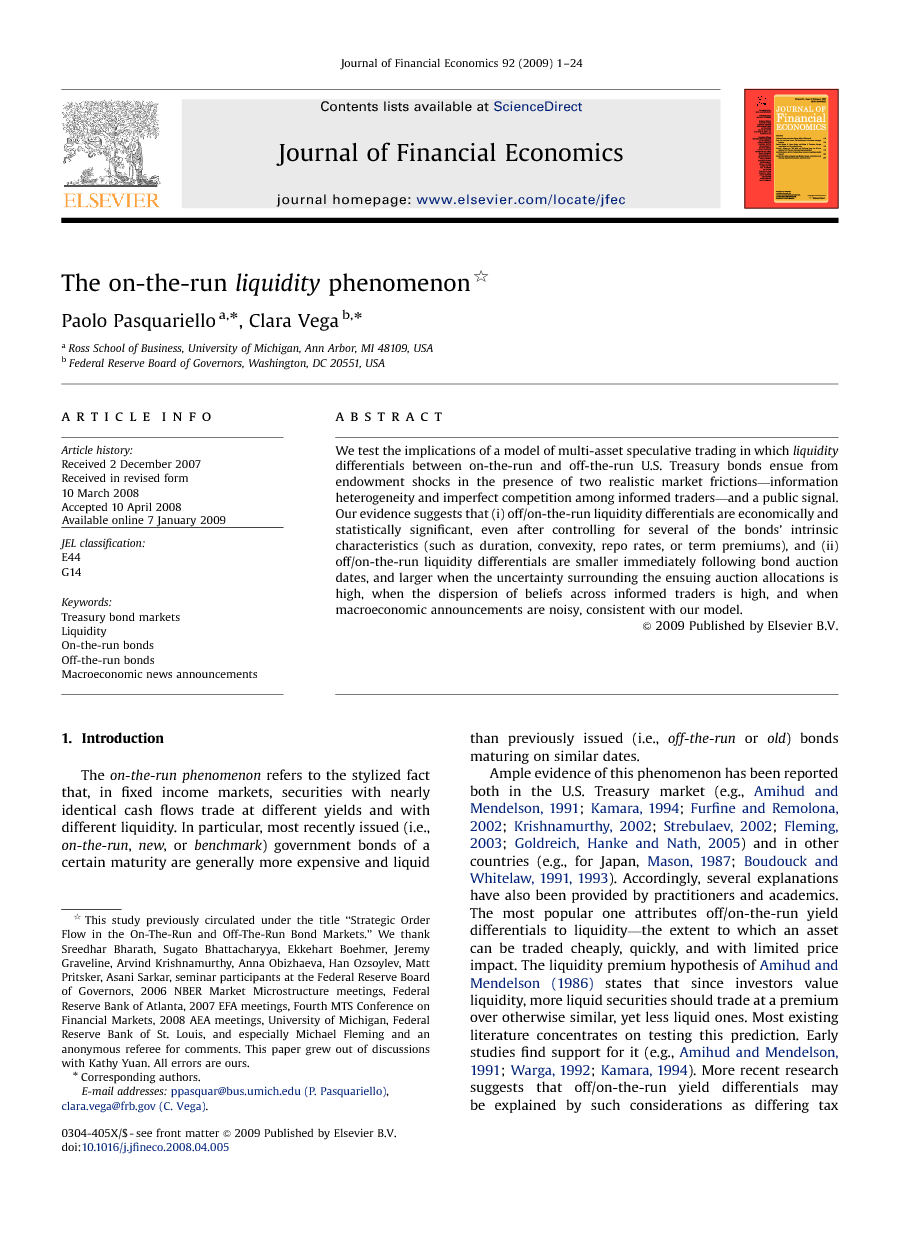 We test the implications of a model of multi-asset speculative trading in which liquidity differentials between on-the-run and off-the-run U.S. Treasury bonds ensue from endowment shocks in the presence of two realistic market frictions—information heterogeneity and imperfect competition among informed traders—and a public signal. Our evidence suggests that (i) off/on-the-run liquidity differentials are economically and statistically significant, even after controlling for several of the bonds’ intrinsic characteristics (such as duration, convexity, repo rates, or term premiums), and (ii) off/on-the-run liquidity differentials are smaller immediately following bond auction dates, and larger when the uncertainty surrounding the ensuing auction allocations is high, when the dispersion of beliefs across informed traders is high, and when macroeconomic announcements are noisy, consistent with our model.

The existence of a negative liquidity differential between on-the-run and off-the-run securities is a pervasive and not fully understood feature of both domestic and international fixed income markets. The main goal of this paper is to deepen our understanding of the links between this important aspect of the on-the-run phenomenon, news about fundamentals, and strategic trading conditional on investors’ dispersion of beliefs and public signals’ noise. To that end, we develop a parsimonious model of speculative trading in multiple assets in the presence of heterogeneously informed, imperfectly competitive traders, auction-driven endowment shocks identifying the on-the-run security from the off-the-run security, and a public signal of their identical terminal value. We then test its equilibrium implications by studying the determinants of daily differences in bid–ask spreads—a common and effective measure of bond market liquidity—for on-the-run and off-the-run three-month, six-month, and one-year U.S. Treasury bills and two-year, five-year, and 10-year U.S. Treasury notes. Our evidence indicates that (i) the resulting off/on-the-run liquidity differentials are large, even after controlling for several differences in their intrinsic characteristics (such as duration, convexity, repo rates, or term premiums), and (ii) an economically meaningful portion of those liquidity differentials is linked to strategic trading activity in both security types. The nature of this linkage is sensitive to the uncertainty surrounding auction shocks and the economy, the intensity of investors’ dispersion of beliefs, and the noise of the public announcement. In particular, and consistent with our model, off/on-the-run liquidity differentials are smaller immediately following bond auction dates and in the presence of (high-quality) macroeconomic announcements, and larger when the dispersion of auction bids is higher, when fundamental uncertainty is greater, and when the beliefs of sophisticated traders are more heterogeneous. These findings suggest that liquidity differentials between on-the-run and off-the-run securities depend crucially on endowment uncertainty in the former and the informational role of strategic trading in both. We believe this is an important implication for future research (including our own) on the on-the-run price phenomenon.