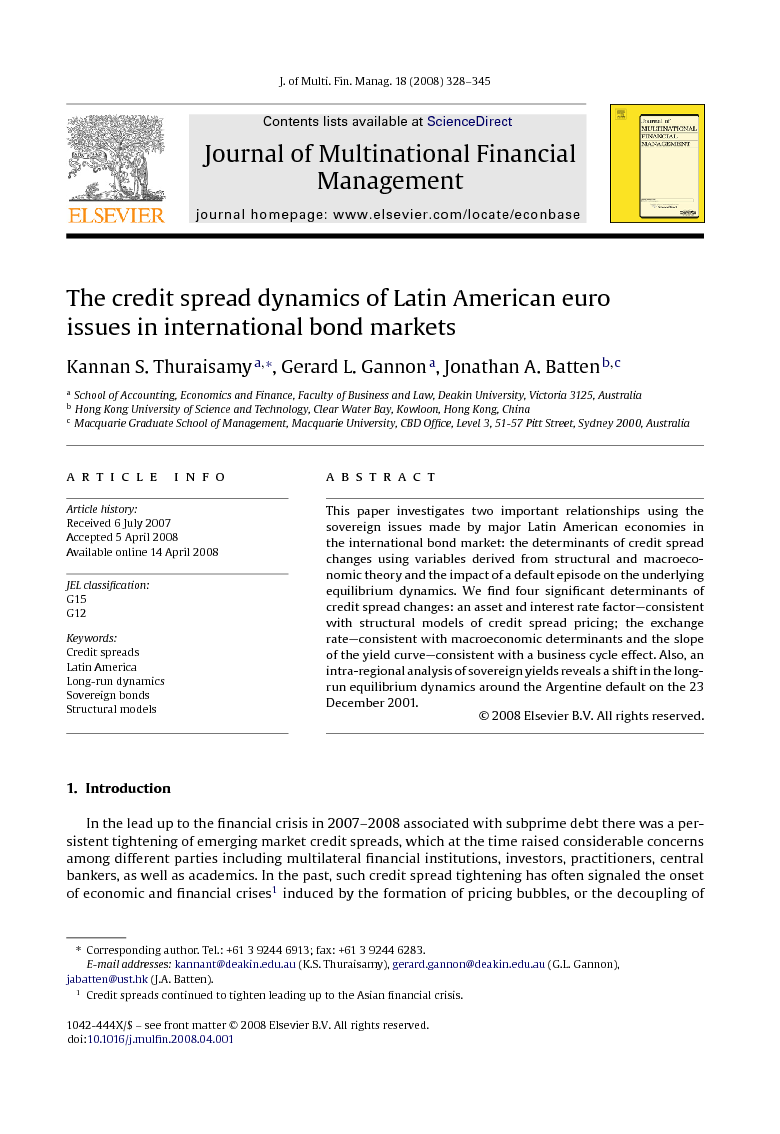 This paper investigates two important relationships using the sovereign issues made by major Latin American economies in the international bond market: the determinants of credit spread changes using variables derived from structural and macroeconomic theory and the impact of a default episode on the underlying equilibrium dynamics. We find four significant determinants of credit spread changes: an asset and interest rate factor—consistent with structural models of credit spread pricing; the exchange rate—consistent with macroeconomic determinants and the slope of the yield curve—consistent with a business cycle effect. Also, an intra-regional analysis of sovereign yields reveals a shift in the long-run equilibrium dynamics around the Argentine default on the 23 December 2001.

Traditional structural theories of corporate credit spread behaviour predict that asset and interest rate factors are negatively correlated to the changes in credit spreads on risky corporate bonds. This paper investigates this theoretical proposition using the yield spreads on sovereign Eurobonds issued in international markets by major Latin American issuers (Brazil, Chile, Colombia, Mexico and Venezuela). The sample period is from 25 February 2000 to 13 January 2006, which includes the default by Argentina on the 23rd December 2001. We find that the change in credit spread is negatively related to the first two factors while the exchange rate is positively related (consistent with local currency depreciation as credit spreads rise). The slope of the yield curve, which captures the business cycle effect, has a positive relationship with short bonds and a negative relationship with the long bonds in our sample. The findings are broadly consistent with structural theory and other empirical findings for corporate and sovereign bonds from other emerging and developed markets. Overall, these findings suggest that sovereign bonds in international markets and corporate bonds issued in US domestic markets appear to be sensitive to the same interest rate effects. The statistical significance of the exchange rate factor representing country risk and the slope variable representing the business cycle effect may be attributable to a sovereign risk premium demanded by investors to invest in these bonds. We also find significant ARMA terms, which indicate inertia in the price adjustment process of sovereign credit spreads. The results also suggest that there was a change in the equilibrium relationship between these sovereign issuers with a decline in the importance of the cross-border cointegration relationship: intramarket relationships have become more important than intermarket (bivariate or pairwise) relationships. Future research could extend this study to a multivariate cointegration framework enabling the identification of common features that exist across different maturities in emerging markets.