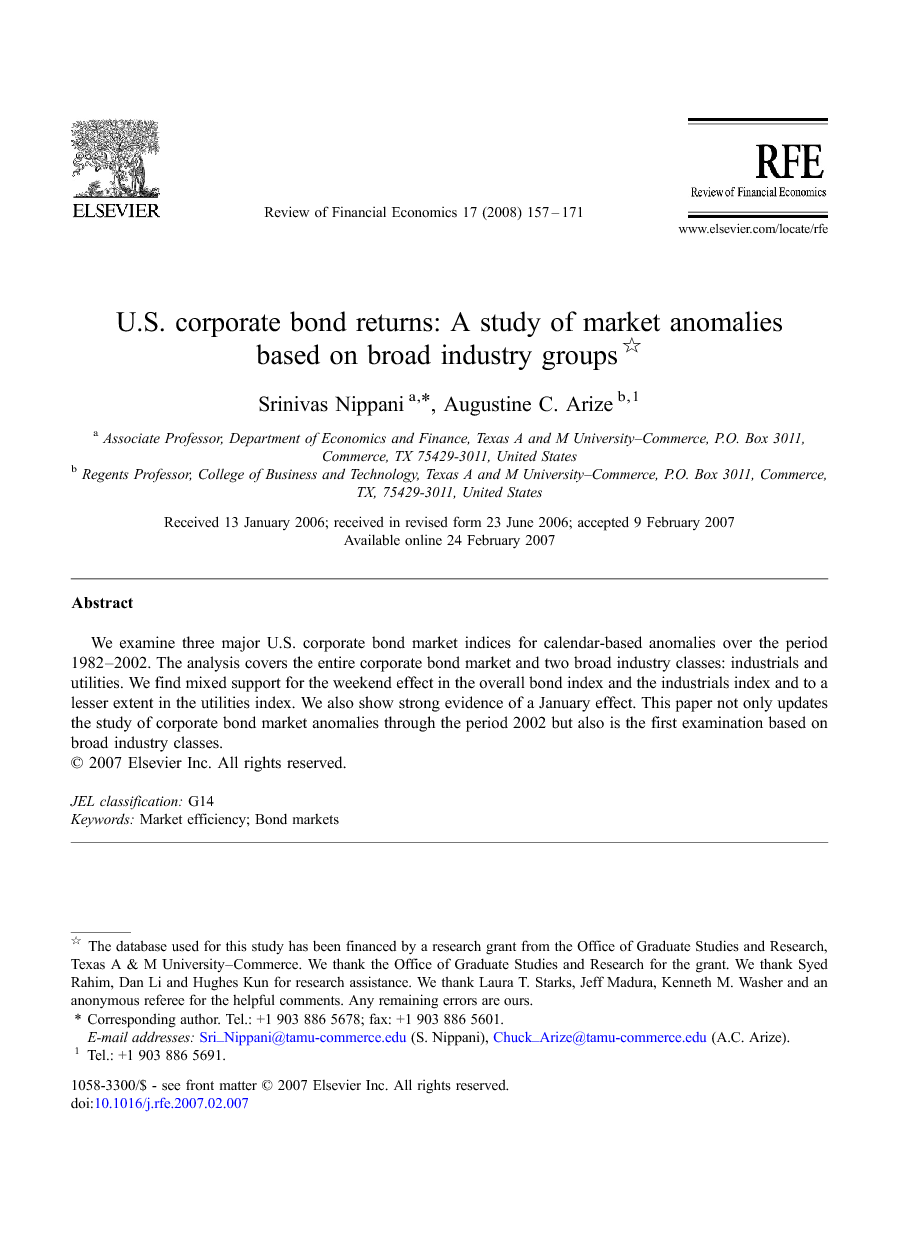 In the present study we examine daily returns on three separate bond indices for market anomalies over the period 1982–2002. We find that Monday returns are not significant using the French (1980) model. However, we find that Monday returns are significantly lower than the average returns for the rest of the week using the Connolly (1989) model. This is different from the results of Jordan and Jordan (1991), who found no significant day-of-the-week effects, using data prior to 1986. This is possibly due to changes in the nature of the equity market and its impact on the bond market. This explanation is lent credence by recent studies which show that, as information alters expectations in one market, it causes traders to adjust their holdings across markets, producing an information spillover and thereby leading to cross-market hedging. We also report turn-of-the-year effects consistent with the Jordan and Jordan (1991) study and other earlier studies. The most important reason for this could be tax-loss selling, especially considering that the bonds represented in the Dow Jones Indices are among the more popular ones in the industries they represent. While there appears to be some differences in market anomalies based on the nature of the industry, they are not different enough to draw significant conclusions. The only industry-based effect that appears to be significant is that there is less evidence of a turn-of-the-year effect in the utilities index as compared with the composite and industrial indices. It appears that the day-of-the-week effect was related to the week-of-the-month effect prior to 1988 in two of the bond indices under study, but the effect seems to have disappeared in the post-1987 period. This study contributes to existing literature in several ways. It updates the market anomalies observed in corporate bond returns since the Jordan and Jordan (1991) study. The data for that study covered the period 1963–1986. The data used in this study cover a more recent time period. As seen in the study, there appears to be evidence of a traditional weekend effect in the corporate bond markets using the Connolly (1989) model. We also find that the turn-of-the-year effect first reported by Jordan and Jordan (1991) continues to be apparent in the bond indices. The practical implications of this study for bond fund managers are that it helps them to time their purchases and sales of bonds based on the day-of-the-week and month-of-the-year. Investors and fund managers alike can use this information to benefit from the market anomalies. For example, if the stock market continues to exhibit the reverse weekend effect and the bond market continues to exhibit the traditional weekend effect, hybrid fund managers can set up their trades to simultaneously benefit from both markets. Considering recent evidence presented by Fleming et al. (1998), and Connolly et al. (2005), managers are indeed looking for cross-hedging opportunities.