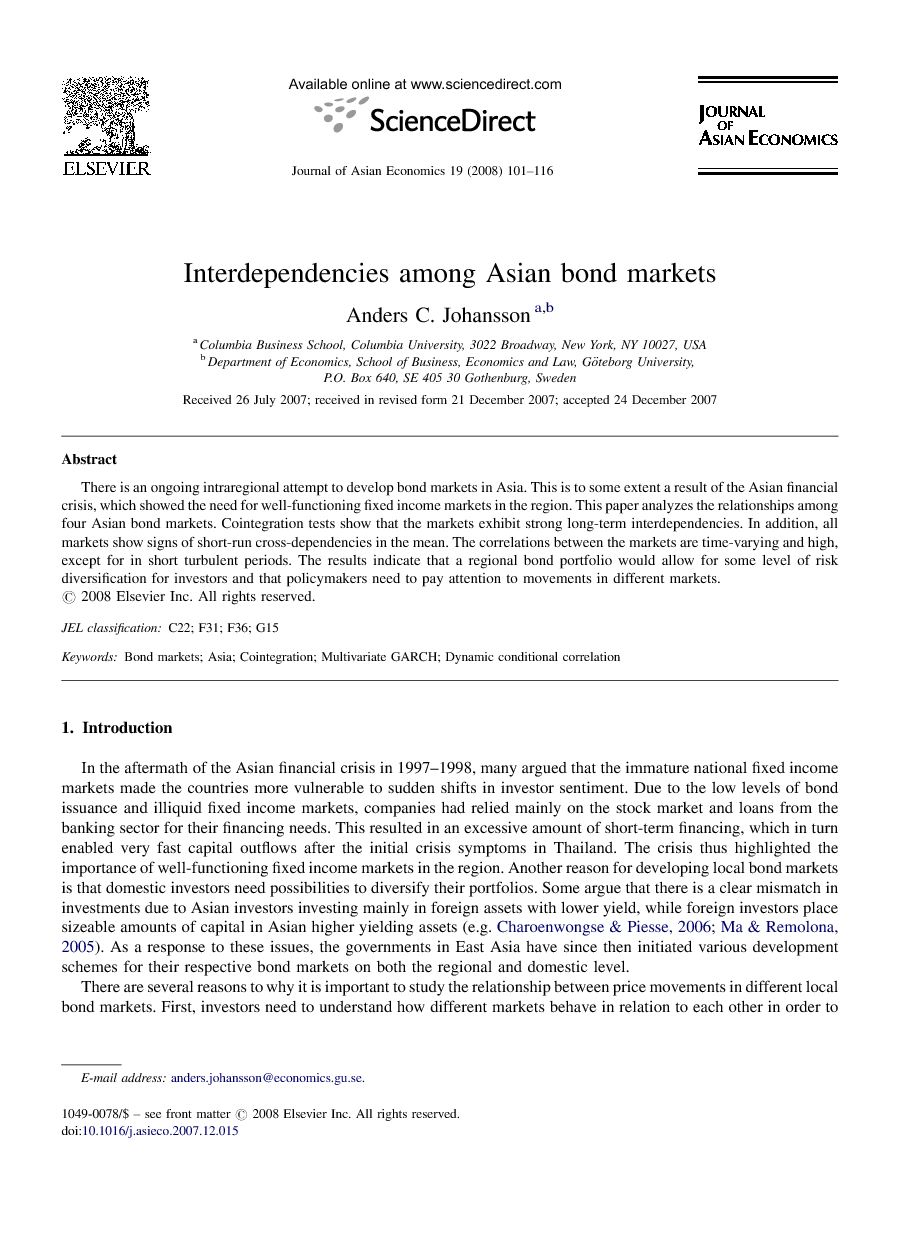 There is an ongoing intraregional attempt to develop bond markets in Asia. This is to some extent a result of the Asian financial crisis, which showed the need for well-functioning fixed income markets in the region. This paper analyzes the relationships among four Asian bond markets. Cointegration tests show that the markets exhibit strong long-term interdependencies. In addition, all markets show signs of short-run cross-dependencies in the mean. The correlations between the markets are time-varying and high, except for in short turbulent periods. The results indicate that a regional bond portfolio would allow for some level of risk diversification for investors and that policymakers need to pay attention to movements in different markets.

This paper analyzes the relationships among four different bond markets in Asia. These are undergoing large changes as the different countries focus on both intraregional as well as domestic development of their markets. The VECM-MVGARCH methodology used in this study allows us to analyze long-run as well as short-run relationships among the four variables. The dynamic modeling of the conditional correlations allows us to better understand the time-varying movements of the four time series. The results are three-fold. Firstly, the Johansen cointegration test shows that the markets are linked in long-term relationships. These relationships are highly significant, and there are no less than three cointegrating relationships. Secondly, the mean equations of the multivariate GARCH estimations clearly indicate causal relationships running in both directions between most of the market pairs. This means that besides the long-run relationship found by the cointegration tests, there are also short-run dependencies among the four bond markets. However, the coefficients for the autoregressive variables are very small, which means that the short-run spillover effects in the mean can be seen as limited in terms of size and impact. Finally, the significant DCC terms and the estimation of the dynamic conditional correlations between each of the four variables indicate that the correlations are indeed time-varying. The levels of correlation are quite high, except for short periods when the correlations decrease quite drastically. Furthermore, the correlations seem to increase over time for most market pairs, indicating an increase in the relationships and integration among the four markets. The volatility processes in all four markets are characterized by asymmetric features, similar to many international equity markets. Also, the volatility is highly persistent in all four markets, a result similar to previous studies on European bond markets. The results have important implications for portfolio managers as well as policymakers in the region. For investors and portfolio managers, the time-varying correlation patterns of the four bond markets indicate the ability to diversify investment portfolios in terms of mean–variance portfolio optimization. The high average levels of correlation among the markets suggest that an investor that applies a traditional mean–variance portfolio optimization procedure might underestimate the benefits of diversifying across the different countries. This benefit is clear when one focuses on how the conditional correlations behave in periods of high volatility, such as during the Asian financial crisis in the second half of the 1990s. For policymakers, it is clear that the markets in the region are very much related despite the still existing barriers against cross-country investment in the regional bond markets.