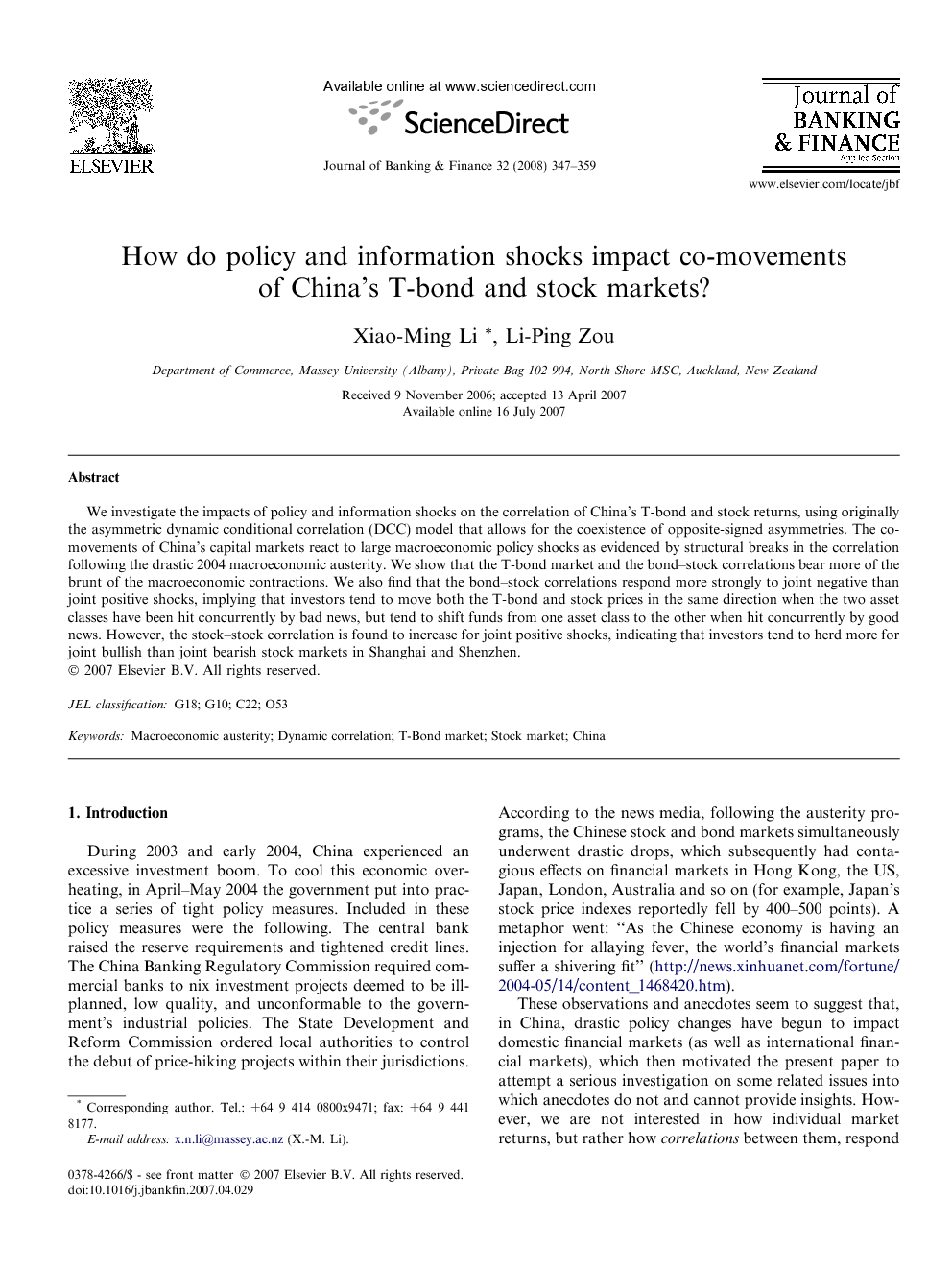 We investigate the impacts of policy and information shocks on the correlation of China’s T-bond and stock returns, using originally the asymmetric dynamic conditional correlation (DCC) model that allows for the coexistence of opposite-signed asymmetries. The co-movements of China’s capital markets react to large macroeconomic policy shocks as evidenced by structural breaks in the correlation following the drastic 2004 macroeconomic austerity. We show that the T-bond market and the bond–stock correlations bear more of the brunt of the macroeconomic contractions. We also find that the bond–stock correlations respond more strongly to joint negative than joint positive shocks, implying that investors tend to move both the T-bond and stock prices in the same direction when the two asset classes have been hit concurrently by bad news, but tend to shift funds from one asset class to the other when hit concurrently by good news. However, the stock–stock correlation is found to increase for joint positive shocks, indicating that investors tend to herd more for joint bullish than joint bearish stock markets in Shanghai and Shenzhen.

We now summarize the main findings of this study that are believed to have important implications for policymakers, market participants and investors in China. The co-movements of the Chinese capital markets do react to large macroeconomic policy shocks as evidenced by structural breaks in the correlation following the drastic 2004 macroeconomic austerity measures whose impact lasted for about 5 months. The T-bond market and its correlations with the Shanghai and Shenzhen stock markets are found to have borne more of the brunt of the macroeconomic contractions than the two stock markets and their correlation. Overall, however, the level of China’s bond–stock market integration is still low, at least lower than that in Europe at some points in time, although China’s stock–stock market integration has reached a quite high level. In addition, the relatively small volatility in T-bond returns implies that investors could reap diversification benefits via “flight to quality” (i.e., by moving their capital out of riskier equities and into safer government securities). Such a portfolio-rebalancing strategy seems to have started to be considered by Chinese investors after the episode of macroeconomic contractions in 2004. As a methodological innovation, we propose a new version of the asymmetric DCC model, MADCC, which seems to have been quite helpful, as it enables us to successfully capture the coexistence of positive-signed and negative-signed asymmetries in the correlation structure, a unique characteristic of the Chinese capital markets. The news impact surfaces based on the MADCC provide “intuitionalized” evidence that the bond–stock correlations tend to increase only when their returns have both been hit by bad news, but the stock–stock correlations tend to increase only when their returns have both been hit by good news.