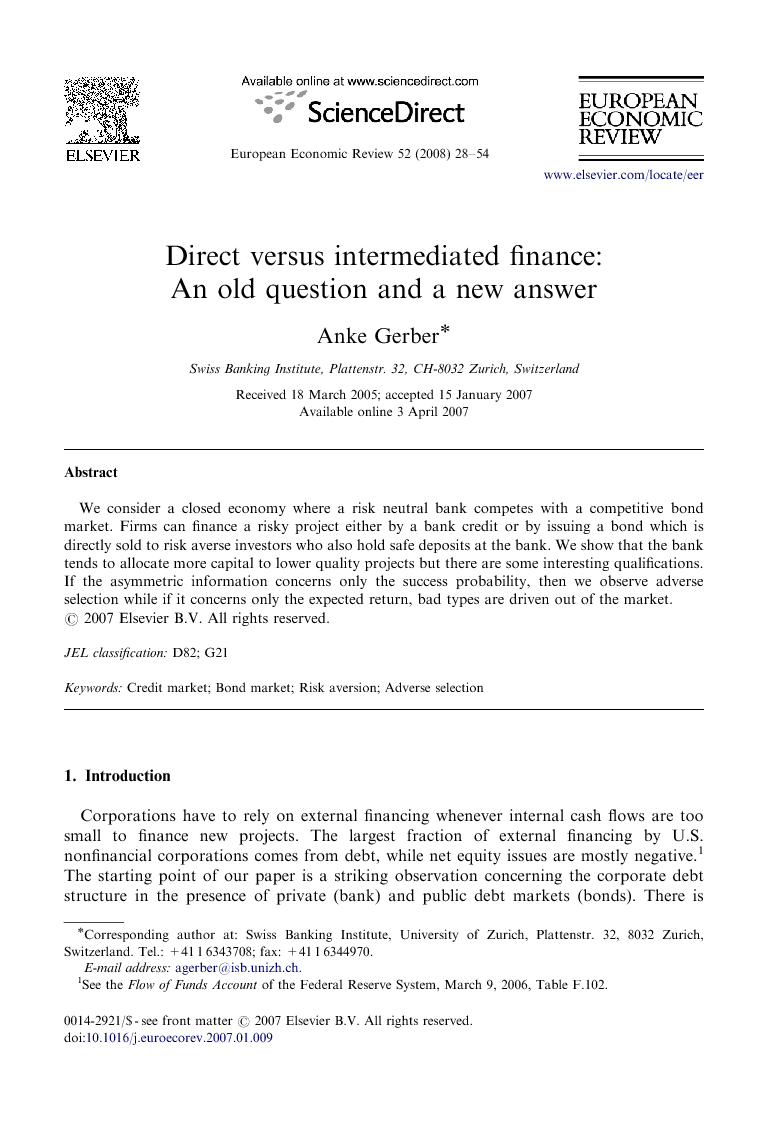 We consider a closed economy where a risk neutral bank competes with a competitive bond market. Firms can finance a risky project either by a bank credit or by issuing a bond which is directly sold to risk averse investors who also hold safe deposits at the bank. We show that the bank tends to allocate more capital to lower quality projects but there are some interesting qualifications. If the asymmetric information concerns only the success probability, then we observe adverse selection while if it concerns only the expected return, bad types are driven out of the market.

We have presented a simple model of a closed economy where a bank competes with a bond market on both sides of its balance sheet: Consumers can invest their capital in risky bonds and in safe deposits and firms can issue bonds and obtain a bank credit. Therefore, when setting the credit volume and the interest rates, the bank has to take into account the resulting equilibrium on the bond market. In particular, the bank does not face an infinitely elastic supply of funds at an exogenously given interest rate as it is commonly assumed in the literature. Different from most models on direct versus intermediated finance in the literature our results predict a mix of financing source, i.e. neither the bank nor the bond market has its own clientele. This is confirmed by several empirical studies showing that a large fraction of firms has a mix of bank and public debt outstanding (Houston and James, 1996 and Johnson, 1997), i.e. bank lending remains an important source of finance even if firms have access to public debt markets. Moreover, we have seen that the credit volume is increasing in the default risk and decreasing in the expected return of the financed projects. This provides a new explanation for the fact that banks allocate more capital to lower quality projects. Unlike earlier work, which has focused on monitoring and relationship banking, our results are driven by the risk aversion of investors and the bank's ability to diversify risk. We do not claim that the monitoring or relationship aspect of banking is not important in explaining the allocation of capital across risky projects. Instead, we want to point out that there is an additional, much simpler explanation, which does not appeal to very sophisticated bank services like monitoring or contract renegotiation and which seems to have been overlooked so far. Risk aversion is a predominant phenomenon and it should come at no surprise that it has significant influence on the allocation of capital and risk in an economy. Our model also has interesting implications for the case where the proportion of the high risk and/or high expected return project gets large. In this case we have seen that there will be a screening equilibrium with adverse selection, whenever firms only differ in the default risk, and a screening equilibrium with positive selection, whenever firms only differ in the expected return of their projects. Putting this prediction to an empirical test could be very insightful since other theoretical models have not produced similar results.20 It would be desirable to distinguish empirically our explanation for the role of banks in project financing from other explanations that have been provided in the literature. However, hard evidence on the relative importance of monitoring, relationship banking and risk diversification may be difficult if not impossible to obtain, so the best we can do is to test the predictions of the theoretical models. In this respect, as we have seen, our model performs very well.