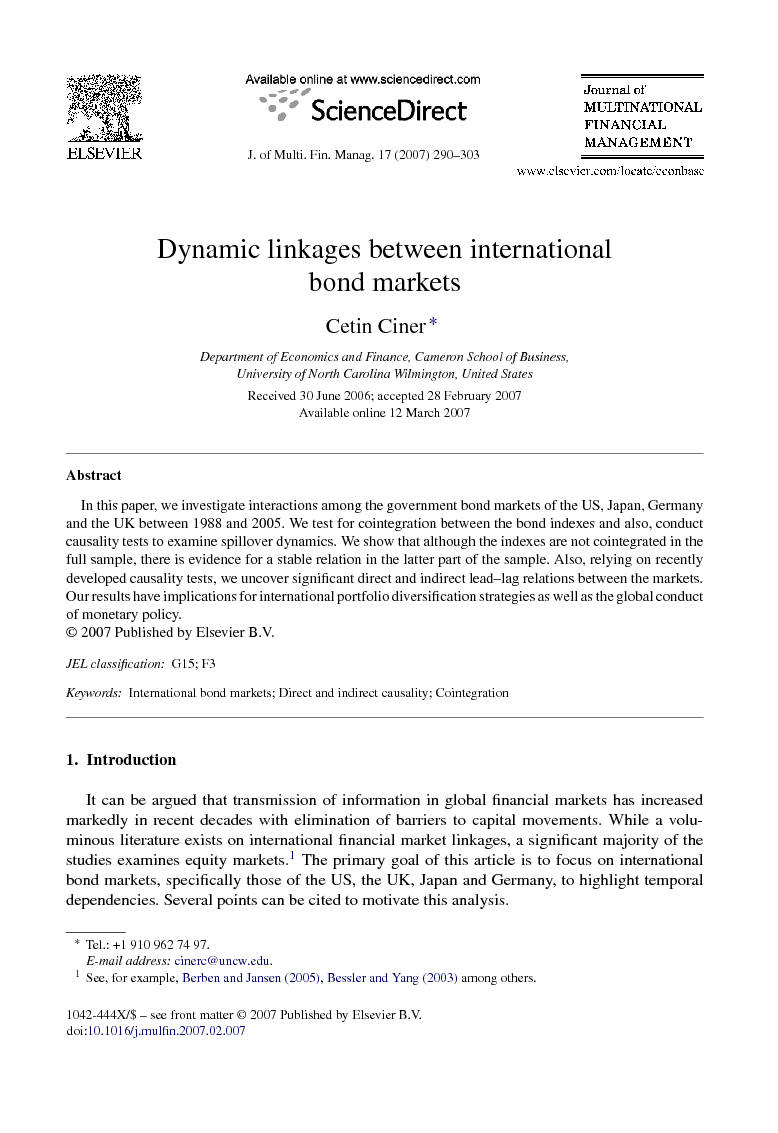 In this paper, we investigate interactions among the government bond markets of the US, Japan, Germany and the UK between 1988 and 2005. We test for cointegration between the bond indexes and also, conduct causality tests to examine spillover dynamics. We show that although the indexes are not cointegrated in the full sample, there is evidence for a stable relation in the latter part of the sample. Also, relying on recently developed causality tests, we uncover significant direct and indirect lead–lag relations between the markets. Our results have implications for international portfolio diversification strategies as well as the global conduct of monetary policy.

It can be argued that transmission of information in global financial markets has increased markedly in recent decades with elimination of barriers to capital movements. While a voluminous literature exists on international financial market linkages, a significant majority of the studies examines equity markets.1 The primary goal of this article is to focus on international bond markets, specifically those of the US, the UK, Japan and Germany, to highlight temporal dependencies. Several points can be cited to motivate this analysis. First, whether international bond markets are linked has implications for understanding the global conduct of monetary policy. Since government bonds are indicators of monetary policy actions, if they are linked internationally and are impacted by movements in interest rates in another economy, domestic monetary policy conduct will be limited. In other words, if shocks are transmitted in global bond markets, the conduct of monetary policy will be sensitive to international developments as well as domestic concerns. Secondly, bond markets represent a large segment of international asset markets and understanding the linkages between them is important for designing effective portfolio diversification strategies. If there is significant comovement across international bonds markets, the benefits of international diversification might not be realized in the long-term. And finally, global bond market linkages can be important for modeling and forecasting of interest rates. Predictive accuracy of statistical models can be improved by incorporating significant dynamics between different markets (Barassi et al., 2001). Prior empirical work, in general, suggests that there are significant linkages between the bond markets of developed economies; however, the results are inconclusive regarding the nature and stability of the relations in the long-run and the lead–lag patterns between the markets. For example, Smith (2002) and Barassi et al. (2001) detect cointegration among the major government bond markets and suggest that benefits of international diversification may not be valid in the long-term. However, DeGennaro et al. (1994), Clare et al. (1995) and Yang (2005) find no evidence of cointegration, although these papers detect short-run dependencies. In other studies, Sutton (2000) shows that a model based on the expectations hypothesis of term structure is rejected in international bond markets due to excessive volatility, and also argues that there is excessive comovement between the global bond markets. A more recent strand of the literature focuses on bond market linkages following the introduction of the single currency in the Euro zone. For instance, Kim et al. (2006) use government bond index data and show that there are time-varying linkages and convergence between the Euro-zone markets and Germany. We contribute to the extant literature in several aspects. First, the study covers a longer time period relative to prior work, between 1988 and 2005, to investigate cointegration properties between the major government bond markets. The longer data set also permits a subperiod analysis to investigate whether there is a change in dynamics. Secondly, we use higher frequency (daily) data in our analysis, relative to prior studies such as Yang (2005) and Smith (2002), who rely on monthly data. It is likely that transmission of information in bond markets has become more rapid and the use of daily data could detect interactions uncovered by monthly data. Thirdly, we investigate the spillover patterns between the markets using a relatively new and advanced statistical method by Dufour et al. (2006). Their approach is novel since it permits a test for both direct and indirect causality within a system of variables, as discussed in detail below, and hence, it could highlight dynamics in global bond markets hitherto not discussed. Specifically, their method permits the investigation of whether an innovation from one of the bond markets could have an impact on another several periods ahead. In empirical analysis, we first investigate cointegration between the government bond indexes and find no supportive evidence in the full sample data. However, we also conduct a subperiod analysis and show that the bond indexes are indeed cointegrated in the latter part of the sample. An implication of this finding, as mentioned above, is that international diversification gains in bond markets could be less important than suggested in prior work. By using a permanent–temporary decomposition analysis by Gonzalo and Granger (1995), we find that all countries, save for Germany, contribute to the long-run evolution of the cointegrated system. Moreover, using the Dufour et al. (2006) multiple horizon causality tests, we show that there is significant causality from the US to the other countries in our sample, which is generally consistent with prior work. However, we also detect a feedback relation between the US and Japan at longer horizons, particularly during first part of the sample. Furthermore, we uncover several indirect causality relations between the indexes, indicating the usefulness of this method. The causality analysis, overall, reveals that the bond markets are sensitive to international innovations, particularly from the US, and hence, it can be argued that the global conduct of monetary policy exhibits dependencies. We organize the rest of the study as follows: in the next section, a theoretical motivation on international interest rate linkages is presented. Section 3 discusses the statistical method used in the paper and Section 4 presents the data set and preliminary statistics. Section 5 includes the empirical findings, while the concluding remarks of the study are offered in the final section.

In this study, we examine the dynamic linkages between international government bond markets. We detect no evidence of cointegration between the indexes in the full sample period. However, we also conduct a robustness analysis by dividing the sample into two and show that the analysis of the latter part of the sample provides a different outlook. We find that the international bond indexes are cointegrated, suggesting that there is increased comovement between the markets. This implies that the benefits of international diversification may not be as significant as suggested in prior work. Moreover, it could be argued that the international conduct of monetary policy exhibits dependencies. We also investigate the causality dynamics between the indexes using a relatively new and advanced method by Dufour et al. (2006), which allows us to test for direct and indirect linkages. Our findings clearly suggest that the US market is more influential in the information transmission process since there is causality from the US to all others in both sample periods. This seems to imply that the US monetary policy innovations are transmitted internationally. We also detect that Japan's impact has decreased in the latter part of the sample, likely as a result of the policies employed in Japan after 2001. It would be of interest to further investigate the significance of the Japanese bond market innovations following the end of the BOJ's quantitative easing policy in 2005.