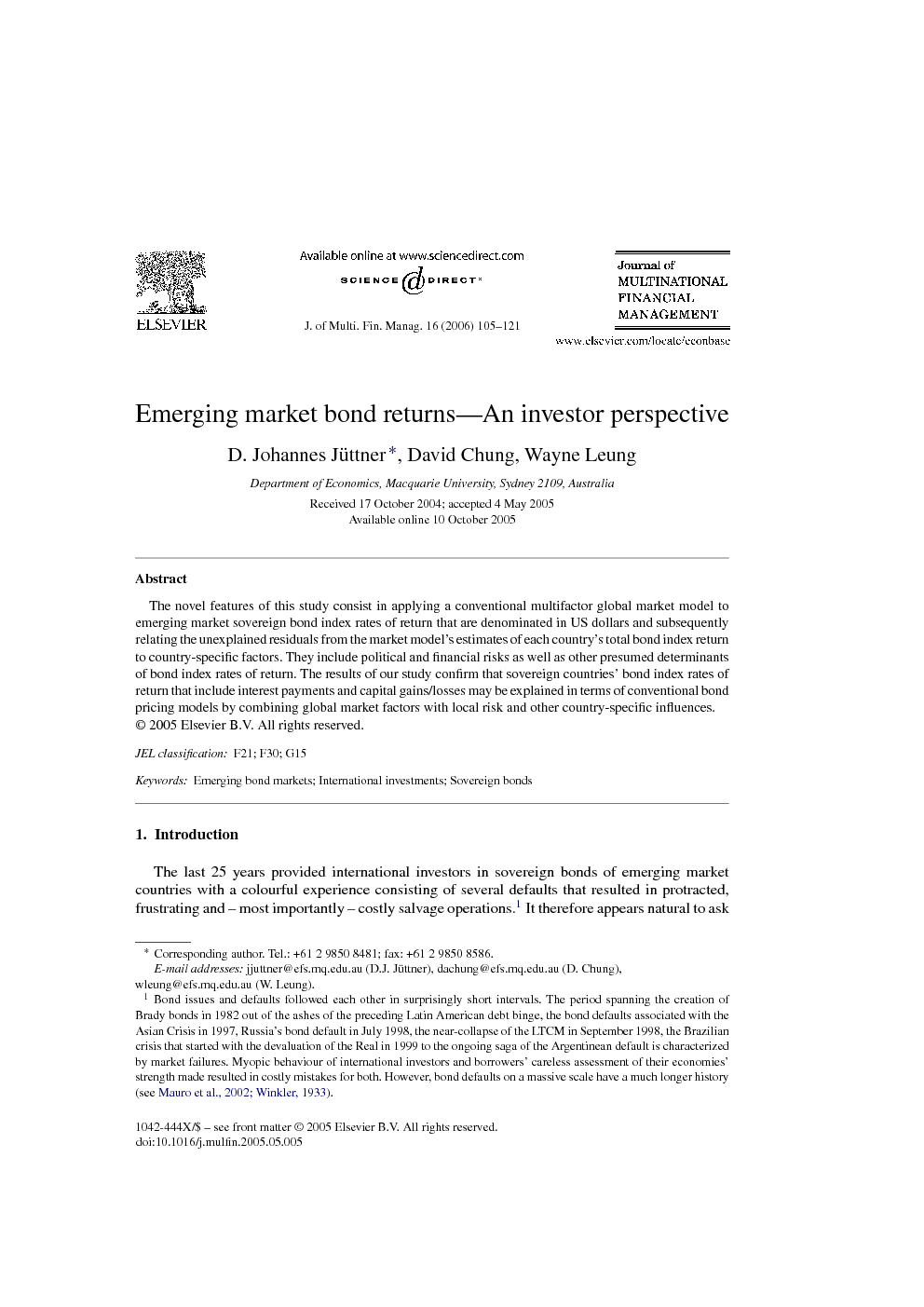 The novel features of this study consist in applying a conventional multifactor global market model to emerging market sovereign bond index rates of return that are denominated in US dollars and subsequently relating the unexplained residuals from the market model's estimates of each country's total bond index return to country-specific factors. They include political and financial risks as well as other presumed determinants of bond index rates of return. The results of our study confirm that sovereign countries’ bond index rates of return that include interest payments and capital gains/losses may be explained in terms of conventional bond pricing models by combining global market factors with local risk and other country-specific influences.

The last 25 years provided international investors in sovereign bonds of emerging market countries with a colourful experience consisting of several defaults that resulted in protracted, frustrating and – most importantly – costly salvage operations.1 It therefore appears natural to ask how international investors have priced sovereign bonds under these challenging conditions. The contribution of this study to the literature is two-fold. First, we apply a conventional multifactor global market model to emerging market sovereign bond index rates of return that are denominated in US dollars. Second, the unexplained residuals from the market model's estimates in each country's total bond index return are then related to country-specific factors. They include political and financial risks as well as other presumed determinants of bond index rates of return. The estimation approach allows us to separate out the common influences of global bond market movements from the country-specific factors that drive rates of return on the outstanding bonds of 19 emerging market countries from Latin America, Transition Economies, Asian and African countries. In the literature on emerging market debt securities, the explanation of bond spreads has been the focus of attention where spreads are defined in a variety of ways. Some authors use issue yields of emerging market bonds minus the interest rate on a riskless benchmark bond such as the 10-year US government security or LIBOR for the calculation of spreads—also called launch spreads. 2 Others compute corresponding yield spreads from bonds trading in secondary markets. Yield spreads are then related to a range of macroeconomic determinants, for example, by Edwards (1984), Kamin and von Kleist (1999), Eichengreen and Mody (1998) and Min et al. (2003). Mauro et al. (2002) explain and compare spreads in the 1990s with those prevailing in an earlier globalization period, 1870–1913. Alternatively, such credit spreads are linked to credit ratings and other presumed economic determinants; Cantor and Packer (1996), Cunningham (1999) and Sy (2002) are investigations in this mould. Secondary market credit spreads plus the riskless rate of the appropriate maturity provide, inter alia, a risk adjusted measure of the debt cost of capital for emerging markets. Launch yields measure marginal debt costs and are thus particular important for borrowers. Credit spreads and bond returns for that matter, may be obtained for individual securities or indices of emerging market bonds. Due to liquidity, size and ratings requirements, and most importantly availability, yield spread studies of emerging markets focus on sovereign bonds. However, from the investor perspective emerging market bond yields and associated credit spreads derived from yields to maturity are of limited value as they remain silent about holding-period yields that fall short of the maturity of the bond. Such investment returns include, besides accrued or received coupon and amortization payments, capital gains (losses) as a result of general market interest rate falls (increases) and of country-specific risk premia adjustments. Total return bond indices capture these various return components on a daily, weekly, monthly or any other desired period. By basing our estimates on such indices our research approach pays more attention to the investor perspective than studies employing yields or credit spreads. In the presence of significant capital gains/losses (see Table 2), changes in expected total bond index returns provide a trigger for purchases or sales of bonds rather than pursuing a buy-and-hold strategy. The research methodology we employ entails a two-stage regression test procedure. First, we estimate a two-factor international market model by regressing quarterly rates of return of a particular country's sovereign bond index on quarterly rates of return of the corresponding global bond market index and on crude oil price changes. For the country specific and the global bond market we employ the JP Morgan global emerging market bond index (EMBI Global). Second, the unexplained residual from the market model's estimates in each country's total bond index return is then related to country-specific factors. Amongst the presumed explanatory variables are various alternative risk measures that capture changes in emerging markets’ financial and political risks as well as other explanatory variables namely GDP growth and inflation. Emerging markets may not form a homogeneous set. We test this hypothesis by splitting up the group into oil-importing and oil-exporting emerging countries and carrying out estimates for the two sets of countries separately and, for purposes of comparison, also collectively. In order to obtain information about whether our model has more general validity and robustness we also include a control group of developed countries in our sample estimates. In the next section, we develop the underlying model and formulate the test equations. Subsequently, in Section 3, the data and descriptive statistics are discussed. In Section 4, we present the results and the final part concludes.

The results of this paper contribute to a better understanding of the pricing of emerging market countries’ sovereign bonds. Utilizing sovereign bond index return data for a panel of 19 emerging market countries from 1994(1) to 2003(3) we show that the rates of return expected by international investors are determined by two distinct types of influences. First, local bond index returns are determined by a global bond market index model augmented by an oil price factor. Splitting up our sample into oil-importing and oil-exporting countries we find marked differences in the results for both. While the oil price changes in the first group of countries and country-specific bond index returns are negatively and significantly related, oil-exporting countries seemingly do not respond to oil price changes in a systematic way. Second, country-specific risk factors reflecting political and financial conditions and several macroeconomic variables systematically and significantly impact on the unexplained residuals of local bond returns from the stage one tests. Parallel estimates for a control group of OECD countries conform more closely to the international market model than emerging bond markets’ rates of return. They also have fewer priced country-specific risk factors. This divergent experience is hardly surprising considering the default history of investments in emerging market bonds in the last quarter of a century. Our findings also suggest that emerging and developed bond markets constitute separate asset classes with few, if any, cross-over investors. Due to their on average below investment grade status, emerging market bonds are not the domain of large institutional investors. The extraordinarily large swings in rates of return appear to provide fertile soil for speculative position taking. By focussing on the investor perspective of emerging market bond rates of return, this paper complements the large literature dealing with merging market bond yields and bond spreads that emphasize issuers’ cost of debt capital.