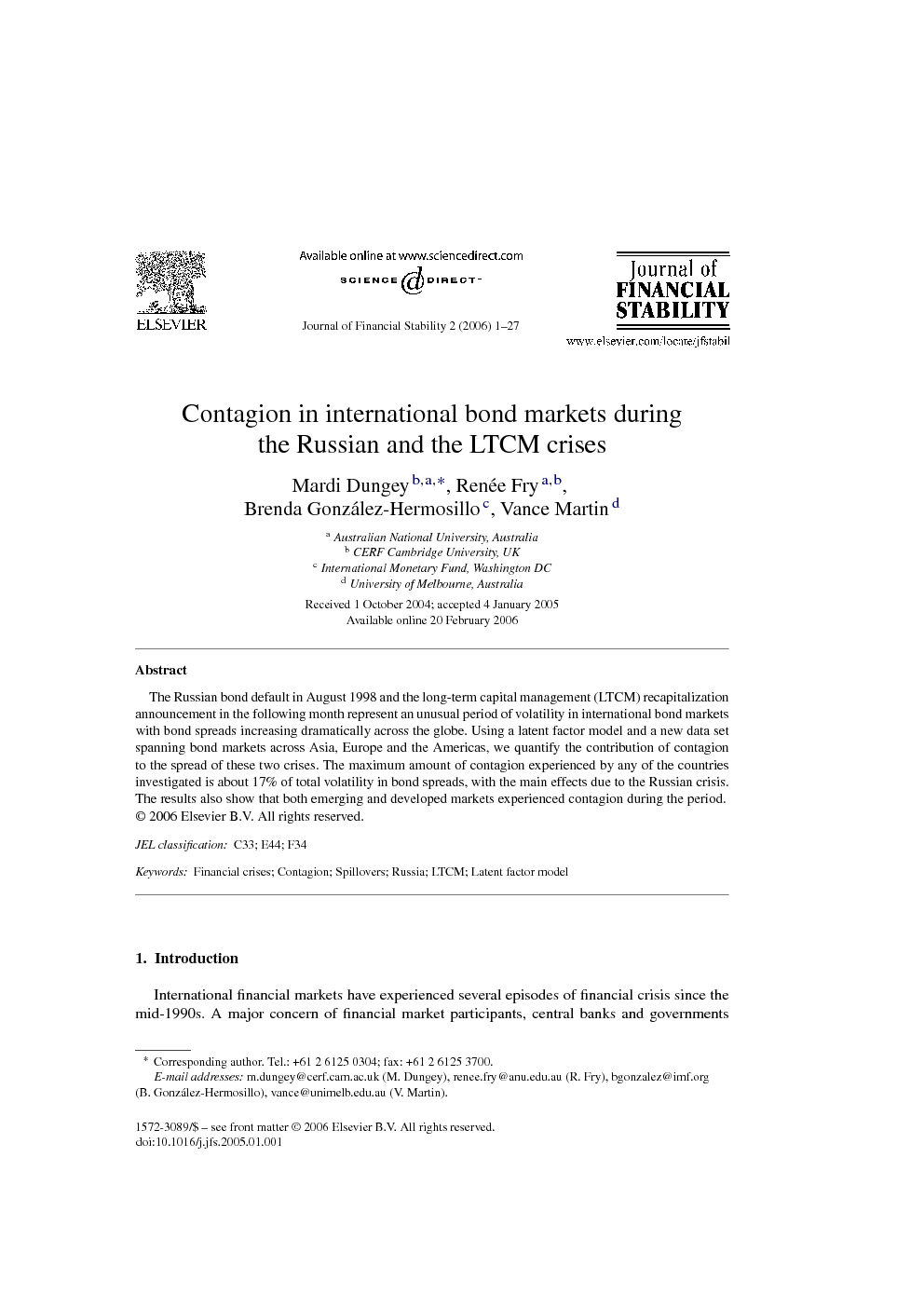 The Russian bond default in August 1998 and the long-term capital management (LTCM) recapitalization announcement in the following month represent an unusual period of volatility in international bond markets with bond spreads increasing dramatically across the globe. Using a latent factor model and a new data set spanning bond markets across Asia, Europe and the Americas, we quantify the contribution of contagion to the spread of these two crises. The maximum amount of contagion experienced by any of the countries investigated is about 17% of total volatility in bond spreads, with the main effects due to the Russian crisis. The results also show that both emerging and developed markets experienced contagion during the period.

International financial markets have experienced several episodes of financial crisis since the mid-1990s. A major concern of financial market participants, central banks and governments during these periods is that a crisis in one country can spread to other markets to create extreme volatility elsewhere in the world. This is the case for the period corresponding to the Russian bond default in August of 1998, followed by the announcement of a recapitalization package for the hedge fund Long Term Capital Management (LTCM) in September, where bond markets in emerging and industrial countries exhibited widespread volatility. The Bank of International Settlements survey of market participants characterised this period as “the worst crisis” in recent times (Bank for International Settlements, Committee of the Global Financial System 1999: p. 40). A special feature of this crisis was that the duration was extremely short, possibly as a result of the aggressive easing of monetary policy by the U.S. Federal Reserve in the period following the recapitalization announcement. This paper identifies the transmission mechanisms of shocks from both the Russian bond default and the LTCM recapitalization announcement to bond markets in emerging and industrial countries. Most analyses of recent financial crises tend to focus on either currency, banking or equity markets. In contrast, there is little empirical literature on the spread of crises through international bond markets. This is partly because a consistent and comprehensive historical time series database on bonds for many emerging economies is difficult to obtain. It is also partly the result of bond markets being relatively more stable during other financial crises such as the 1997–1998 Asian crisis, where it was equity and currency markets that exhibited relatively greater volatility; see for example Forbes and Rigobon (2002), Bae et al. (2003) and Granger et al. (2000). The empirical analysis is conducted on a panel of daily bond spreads for a broad range of emerging and industrial countries over 1998. The spreads of the emerging economies are the long-term sovereign bonds issued in international markets relative to a comparable risk-free benchmark, whilst the spreads of the industrial countries are the long-term corporate bonds issued in the domestic economy relative to a comparable risk-free benchmark. One advantage of working with bond spreads is that they reflect the risk premium that investors assign to prospective borrowers. These risks include the perceived creditworthiness of borrowers, the willingness of lenders to take on risk, and the liquidity in the market, all of which are entangled during crisis episodes.1 The identification of the transmission mechanisms linking international bond markets is based on specifying a latent factor model of bond spreads. Four types of factors are considered. The first three types of factors include a common factor which impacts upon all bond markets, a set of regional factors, which are common to countries within a geographical area, and country-specific factors which are idiosyncratic to a specific bond market. The fourth type of factor investigated represents the effects of contemporaneous movements across markets having conditioned on the common, regional and idiosyncratic factors. This transmission channel is referred to as contagion as it represents an additional linkage during crisis periods in excess of movements in bond spreads that arise during non-crisis periods; see for example, Sachs et al. (1996), Masson, 1999a, Masson, 1999b and Masson, 1999c, Dornbusch et al. (2000) and Pericoli and Sbracia (2003). An important feature of this modelling strategy is that it is possible to decompose the observed volatility in bond spreads into various components and thereby identify the contribution of contagion to total volatility in each country's bond market.2 The empirical analysis leads to four important findings. First, there is substantial contagion evident emerging from the Russian shock but relatively little from the LTCM shock. The contribution of contagion to total observed volatility in the change in bond spreads ranged from under 1% (to the U.K.) to around 17% (to the Netherlands and Brazil). The second result points to the importance of financial exposures to the crisis countries in transmitting the crisis, the countries most affected by contagion from Russia had substantial banking exposures to Russia. The third result provides some evidence supporting the literature that contagion effects are regional in nature, contagion is consistently present in the Eastern European countries of the sample. The final important result is that contagion effects are not necessarily more apparent in developing financial markets than developed markets. Although the level of volatility experienced in developing markets is generally higher than developed markets, the proportionate effect of contagion does not systematically differ between them. The remainder of this paper is organized as follows. Section 2 reviews the background of events and puts forward a set of four propositions about the transmission of the crises. This is followed by a discussion of the empirical characterics of the data in Section 3. A model of contagion is described in Section 4, which is related to the existing literature on contagion in Section 5. The estimation method is discussed in Section 6 followed by the empirical results in Section 7. Section 8 concludes.

The international spillover effects stemming from the Russian debt default and the LTCM recapitalization announcement in 1998 seemed to be different from those of other financial crises in the 1990s. In 1998, bond markets in both developed and emerging economies experienced a significant widening of spreads between long-term bonds and their corresponding risk-free rate of return. In other episodes of financial crisis during the 1990s, the impact of crises seemed to be limited to emerging markets, or even a regional subset of them. This paper examined the crises associated with the Russian bond default in August 1998, and the LTCM recapitalization announcement in September 1998. Using a latent factor model, the change in the premia of 12 bond markets was decomposed into components associated with a common world factor, country-specific factors, regional factors and contagion effects. Contagion was defined as the contemporaneous effect of idiosyncratic shocks transmitting across country borders. This definition of contagion is consistent with those offered in a substantial portion of the literature on this topic, including Masson, 1999a, Masson, 1999b and Masson, 1999c, Favero and Giavazzi (2002) and Forbes and Rigobon, 2001 and Forbes and Rigobon, 2002. The contribution of this paper is both in the application to bond markets and that we provide numerical estimates of the contribution of contagion to volatility in those markets. The results show clear evidence of contagion effects from Russia, to both emerging and developed countries, while the global contagion effects from the LTCM recapitalization announcement tended to be smaller. In proportionate terms, contagion effects from Russia were particularly substantial for the Netherlands, Brazil, Bulgaria and Thailand, ranging from 8 to about 17% of total volatility. The results showed that the strength of market fundamentals and the extent of offshore exposures of countries to Russia were important factors in determining the strength of contagion across national borders. Further, there is also strong evidence that contagion operated within regions, with the Russian bond default affecting the bonds markets of Poland and Bulgaria. The absence of substantial contagion from the LTCM recapitalization announcement, as a global liquidity shock, is somewhat surprising given the anecdotal evidence offered by traders surveyed by the Committee on the Global Financial System (1999: chapter 3). However, these results may reflect the short duration of the LTCM recapitalization announcement period (spanning about 3 weeks) as the Fed acted to contain a potential credit crunch by easing monetary policy aggressively. The evidence also suggests that while the U.S. experienced some contagion from Russia, contagion from the LTCM recapitalization announcement crisis to Russia was very small. The proportion of volatility in the premia attributed to contagion did not provide clear evidence as to whether the crises had a greater effect on emerging or developed markets. When the results were transformed to squared basis point effects, the evidence generally supported the contention that contagion was greater in emerging markets, due to the overall higher degree of volatility typically experienced in those markets. While most of the literature on contagion generally espouses the notion that contagion is only a concern for emerging countries, the results in this paper suggest that contagion can also be meaningful for developed economies, at least in the bond market. Our results also give support to the view that Brazil was affected by contagion prior to its currency crisis in January 1999. The relatively large contagion effects from Russia to Brazil, may be a reflection of the vulnerability of this country. That the contagion to Brazil is evident in the data prior to its own crisis provides scope for interesting future work in establishing at what point pre-crisis jitters are evident in financial markets.