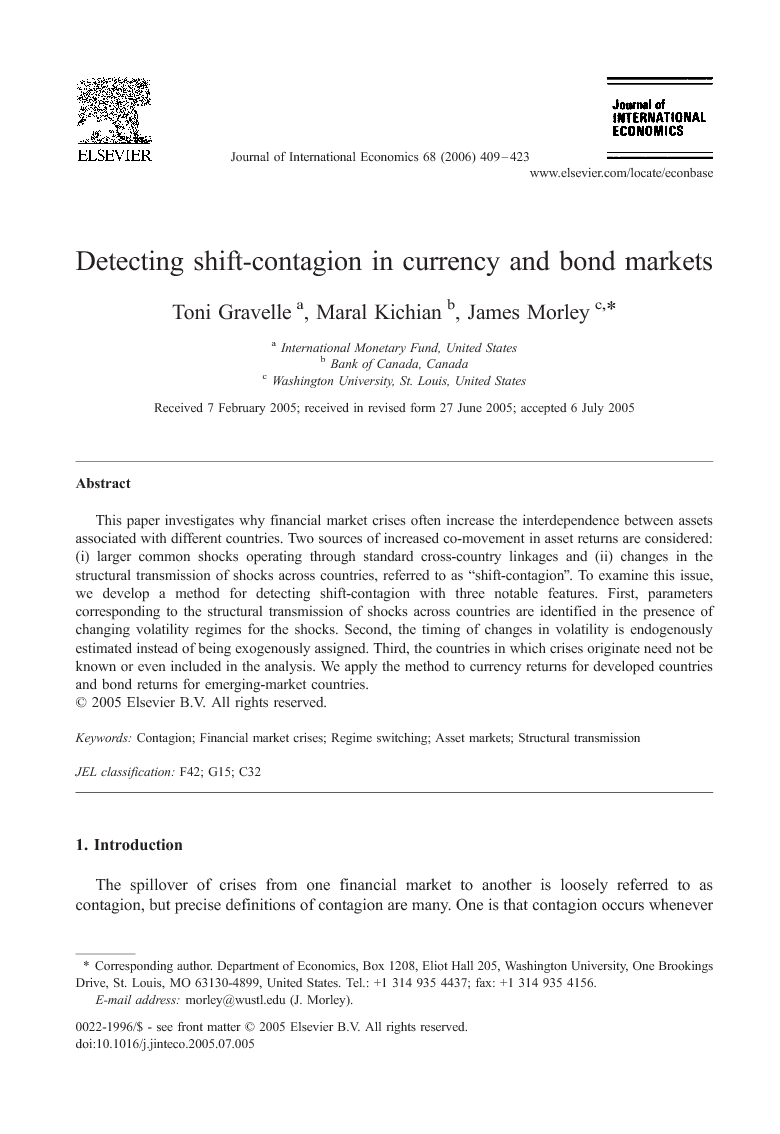 This paper investigates why financial market crises often increase the interdependence between assets associated with different countries. Two sources of increased co-movement in asset returns are considered: (i) larger common shocks operating through standard cross-country linkages and (ii) changes in the structural transmission of shocks across countries, referred to as “shift-contagion”. To examine this issue, we develop a method for detecting shift-contagion with three notable features. First, parameters corresponding to the structural transmission of shocks across countries are identified in the presence of changing volatility regimes for the shocks. Second, the timing of changes in volatility is endogenously estimated instead of being exogenously assigned. Third, the countries in which crises originate need not be known or even included in the analysis. We apply the method to currency returns for developed countries and bond returns for emerging-market countries.

The spillover of crises from one financial market to another is loosely referred to as contagion, but precise definitions of contagion are many. One is that contagion occurs whenever asset returns associated with different countries co-vary in excess of what would be implied by the usual commercial, financial, and institutional links between countries. Another more narrow definition is that contagion occurs whenever shocks spread through herding behaviour in financial markets. A third broader definition refers to any increased co-movement between asset returns during crises as contagion. A fourth definition, referred to as “shift-contagion”, suggests that to qualify as contagion, increased co-movement between asset returns during crises must be driven by change in the structural transmission of shocks across countries, rather than just a change in size of underlying shocks. Given this multiplicity of definitions, it is not surprising to find widely varying opinions as to which crisis events cause or have caused contagion.1 Early tests for a shift in the way shocks are transmitted across countries suggested the existence of contagion. For example, King and Wadhwani (1990) modeled contagion as a spillover of volatility from one financial market to another in the presence of imperfect information availability across markets. They considered a number of tests for volatility spillovers, including estimating time-varying correlations between equity returns in international markets. They found correlations increased significantly just after the October 1987 stock market crash. Other studies, including Bennett and Kelleher (1988) and Lee and Kim (1993) reached similar conclusions. However, Forbes and Rigobon (2002) argued that the conclusions from these and similar studies might be misleading due to the simultaneous nature of financial interactions and the presence of heteroskedasticity in equity returns.2 For example, in the case of heteroskedasticity, they pointed out that when the variances of two assets increase (as they typically do during periods of crises), their correlation also increases regardless of whether or not the structural transmission of shocks between these assets changes. Taking such econometric concerns into account, a number of recent studies have concluded that there is, in fact, little or no evidence of contagion in financial markets. For example, Forbes and Rigobon (2002) and Rigobon (2001) found little incidence of shift-contagion in equity and bond markets during the Mexican, Asian, and Russian crises of the 1990s. Similarly, Rigobon (2003a) concluded that no shift-contagion occurred between 1994 and 1999 in the Brady bond markets of Argentina and Mexico. In this paper we develop a method for detecting shift-contagion with three notable features that are designed to address concerns about the previous empirical literature. First, the parameters related to the structural transmission of common shocks across countries are identified in the presence of regime-switching volatility in the common shocks. In particular, structural identification occurs as long as the heteroskedasticity in idiosyncratic structural shocks is not perfectly synchronous with the heteroskedasticity in the common structural shocks. This is an example of “identification through heteroskedasticity” (see Sentana and Fiorentini, 2001 and Rigobon, 2003a). In terms of testing for shift-contagion, if the change in structural impact coefficients is proportional given a change in volatility regime, it suggests a change in the size of shocks, but not in the structural transmission of shocks.3 Importantly, this approach addresses the econometric concerns raised by Forbes and Rigobon (2002) about early studies of contagion. Second, the timing of changes in volatility is endogenously estimated, instead of being exogenously assigned. There is considerable evidence of Markov regime switching in asset markets.4 Furthermore, the estimated regimes tend to match with events such as the Mexican, Asian and Russian crises of the 1990s. While endogenously estimating regimes obviously lowers the power of any test of contagion versus exogenously assigning the correct timing based on an ex post dating of crises, it is not always clear a priori what the correct timing should be. Meanwhile, results for tests of contagion can be quite sensitive to even small changes in the dating of crises (see Rigobon, 2003b).5 Third, the countries in which crises originate need not be known or even included in the analysis. While crises often can be linked to specific countries, there are sometimes more general crises driven by large common shocks such as movements in U.S. macroeconomic variables, changes to international demand conditions, liquidity shocks, or changes in attitudes towards risk (see Calvo, 2002). Methods that assume crises are always caused by large idiosyncratic shocks in one country and look for spillovers to other countries will mistakenly find evidence of contagion whenever common shocks affect more than one country simultaneously. A related drawback of such methods is that the country generating the crisis may not always be known with certainty. For example, it is difficult to assign the instability in the European monetary system in the early 1990s to only one country, as many of them were experiencing a crisis at the same time. Our method detects common shocks, regardless of their source, and produces evidence of shift-contagion only if the structure of their simultaneous transmission to any pair of countries is fundamentally altered by crises. We apply our method to investigate the presence of shift-contagion in currency markets for developed countries and bond markets for emerging-market countries. A priori, one might expect evidence of shift-contagion would be harder to detect in the currency markets for developed countries than bond markets for Latin American countries, in part because the currency markets are relatively less volatile. However, confirming the power of our test, we reject the null hypothesis of no shift-contagion for a number of currency returns, especially for European countries. Meanwhile, confirming the results in Rigobon (2003a), we find little evidence of shift-contagion in Latin American bond markets. The paper proceeds as follows. Section 2 presents our model and explains the assumptions required for its identification. Section 3 describes the data and reports diagnostic tests that provide general support for our modeling assumptions. Section 4 reports model estimates and results for a number of diagnostic tests of the model. Section 5 reports results for our test of shift-contagion and provides some interpretation of the results. Section 6 concludes with a brief discussion of policy implications.

One motivation of the contagion literature is to address how countries can reduce their vulnerability to external shocks during periods of heightened volatility. In this vein, it is important to understand whether a shock is transmitted across markets via channels that only appear during turbulent periods (crisis-contingent channels) or whether they are transmitted via links that exist in all states of the world. For Latin American countries, the empirical results presented in this paper suggest that shocks are generally transmitted via long-term linkages between these countries, so that attempts at reducing their vulnerability to contagion via short-term or temporary strategies may be ineffective. On the other hand, for many of the developed countries, there is evidence to suggest that some shocks get transmitted only during turbulent periods. This would imply that certain short-term stabilizing policies, such as foreign exchange intervention or tighter monetary policy, could be warranted during periods of heightened volatility and crisis.