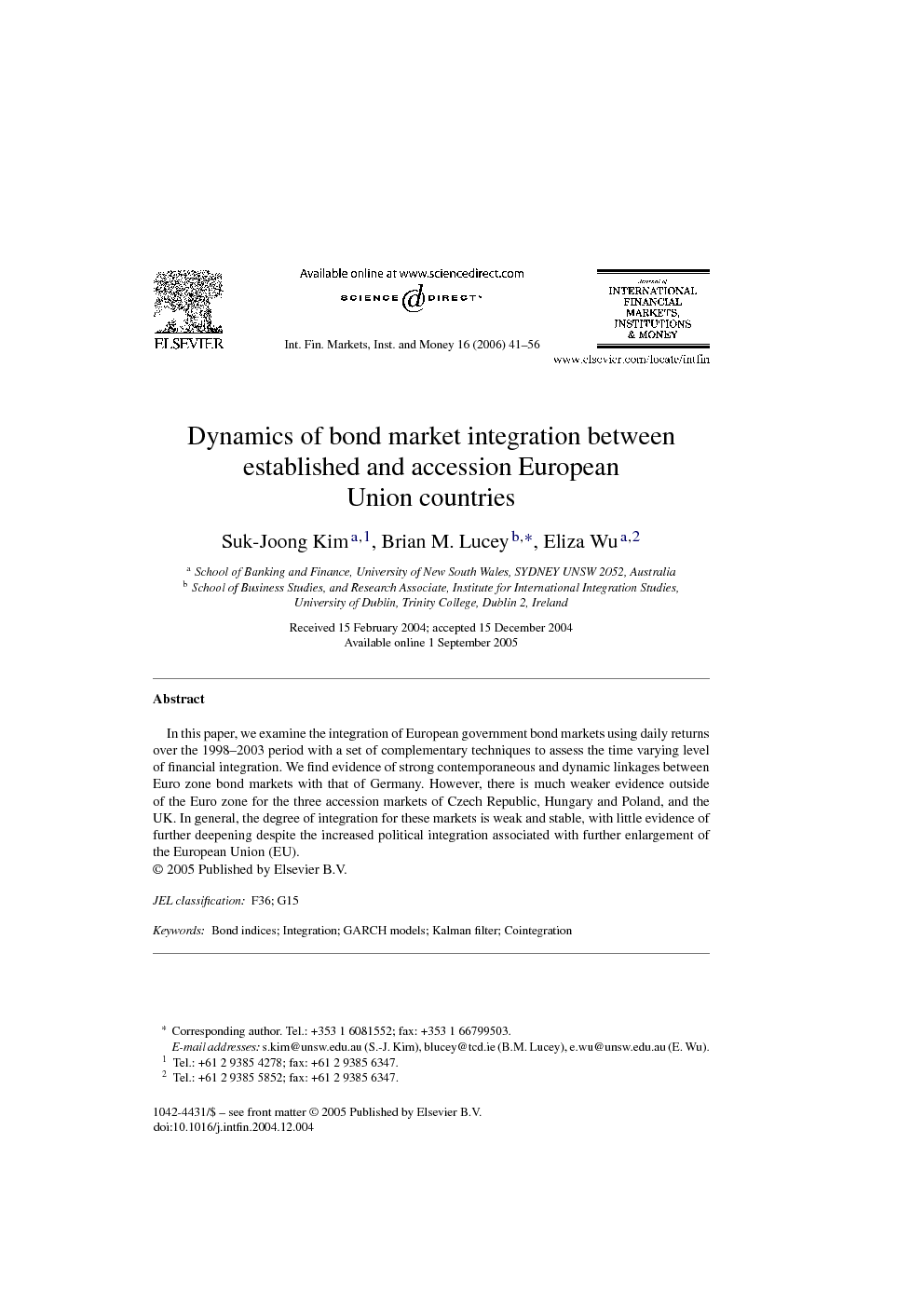 In this paper, we examine the integration of European government bond markets using daily returns over the 1998–2003 period with a set of complementary techniques to assess the time varying level of financial integration. We find evidence of strong contemporaneous and dynamic linkages between Euro zone bond markets with that of Germany. However, there is much weaker evidence outside of the Euro zone for the three accession markets of Czech Republic, Hungary and Poland, and the UK. In general, the degree of integration for these markets is weak and stable, with little evidence of further deepening despite the increased political integration associated with further enlargement of the European Union (EU).

The political, economic and monetary developments associated with the European Union (EU) have been major catalysts for regional financial market integration. As such, the next historical stage of EU enlargement will also have financial implications. Whilst there is substantial evidence of convergence in the present bond markets within the European Union (e.g., see Galati and Tsatsaronis, 2003), less is known about the level and dynamics of financial integration between the accession and established members. In this study, we focus on integration between government bond markets of three major accession countries, Poland, the Czech Republic and Hungary, as well as a subset of countries already belonging to the EU, Belgium, France, Ireland, Italy, Netherlands, UK and Germany. The choice of countries is determined by data and economic factors. In regards to data, the three accession countries chosen represent those that have the longest available time series data comparable to the established EU countries. In economic terms these countries represent the largest, most developed economies amongst the accession and established member groups, with the largest and most liquid government debt markets. The concept of financial market integration is integral to international finance and it is intuitive that financial market integration changes with economic conditions. The economic explanation that is generally accepted is that the level of risk aversion changes and investors require time varying compensation for accepting a risky payoff from financial assets. For this reason, recent studies have allowed integration to vary over time and with events (e.g., Aggarwal et al., 2003; Barr and Priestley, 2004 and Bekaert and Harvey, 1995). For government bonds, Ilmanen (1995) provided one of the first assessments on time varying expected returns using an asset pricing model. Extending from this, Barr and Priestley (2004) applied a similar framework to assess international bond market integration. Moreover, both Clare and Lekkos (2000) and Cappiello et al. (2003) have found significant variations in international bond market return comovements but they do not interpret this in a financial market integration context. Like Cappiello et al. (2003), Christiansen (2003) has also found some changes in European bond markets since the introduction of the Euro. Christiansen (2003) recently used the AR-GARCH model of Bekaert et al. (2002) to assess volatility spillovers in European bond markets. She provides empirical evidence that regional effects have become dominant over both own country and global effects in European Monetary Union (EMU) bond markets with the introduction of the Euro but not in non-EMU countries where country effect remains strong. Given that Driessen et al. (2003) find factors relating to the term structure to explain most of the variations in international excess bond returns, it is conceivable that economic convergence required as part of EU membership has inevitably led to higher levels of bond market convergence. However, this remains to be determined for EU accession members, as there is little evidence of the extent, still less the dynamics, of bond market integration. The attention on comovements across government bond markets in the literature pales in comparison to that on stock markets. Smith (2002) is one of the few studies to have tested for cointegration (long-term relationship) in international government bond markets. They apply the Johansen (1988) and Johansen and Juselius (1990) techniques on monthly mixed maturity (greater than one year) bond index returns and detect the presence of cointegrating vectors. In addition, they find mixed evidence on seasonality in government bond markets. However, the literature is silent on the time varying nature of European bond market integration in terms of the returns, variances and covariances. This paper aims to address this void and provide empirical evidence on the dynamic nature of bond market integration amongst the established EU and accession countries. Given that yield differences between government bond issues in the European Monetary Union are small (through monetary policy coordination), we expect EMU bond markets to be more closely integrated overall than new incoming members, and we aim to investigate the extent to which these accession countries bond markets differ from the existing markets. This is vital for the success of the European Union's new phase of accession beginning in May 2004. Barr and Priestley (2004) believe the economic costs and benefits of international bond market integration are likely to be significant, ultimately leading to lower cost of fiscal funding for governments. This suggests that benefits of integration are likely to outweigh the costs. The major findings of this paper are: (i) although there are strong linkages between established EU bond markets with that of Germany, the three accession countries’ linkages are weaker and show no evidence of growing integration with the EU core in the near term; (ii) the UK bond market's linkage with Germany is relatively weaker than the EMU countries’; (iii) of the three accession countries, the Czech Republic is the least integrated with the established EU bloc due to high currency risks. The remainder of this paper is organized as follows: Section 2 discusses the bond market index data used in this study; Section 3 details the three empirical methodologies employed; the estimation results are discussed in Section 4. Finally, we provide our conclusions in Section 5.

We note that previous research on bond market integration is predominantly static in nature. This paper has examined, from a variety of dynamic perspectives associated with different methodologies, the evolving nature of the relationship between the MSCI bond indices of selected European countries, distinguishing between those that most recently joined the EU and more established members. We have examined the dynamic nature of the linkages via dynamic cointegration, Haldane and Hall's Kalman filtering method and bivariate EGARCH modeling perspectives. We provide robust empirical evidence for strong contemporaneous and dynamic linkages between existing EU member country bond markets with that of Germany. For the UK and the three accession countries of Czech Republic, Poland and Hungary, however, we find such linkages weak and relatively stable over the sample. Convergence, so far as it exists, appears to be slow and towards the UK for Poland, the largest of the new members. It appears that the preaccession measures to achieve economic convergence were insufficient to generate rapid bond market integration and currency risk remains a problem for the Czech Republic. Thus, our results have an important policy implication in that government bond market convergence requires more than monetary and fiscal policy coordination. That is, bond market convergence requires policies designed specifically to address issues unique to this segment of the financial market.