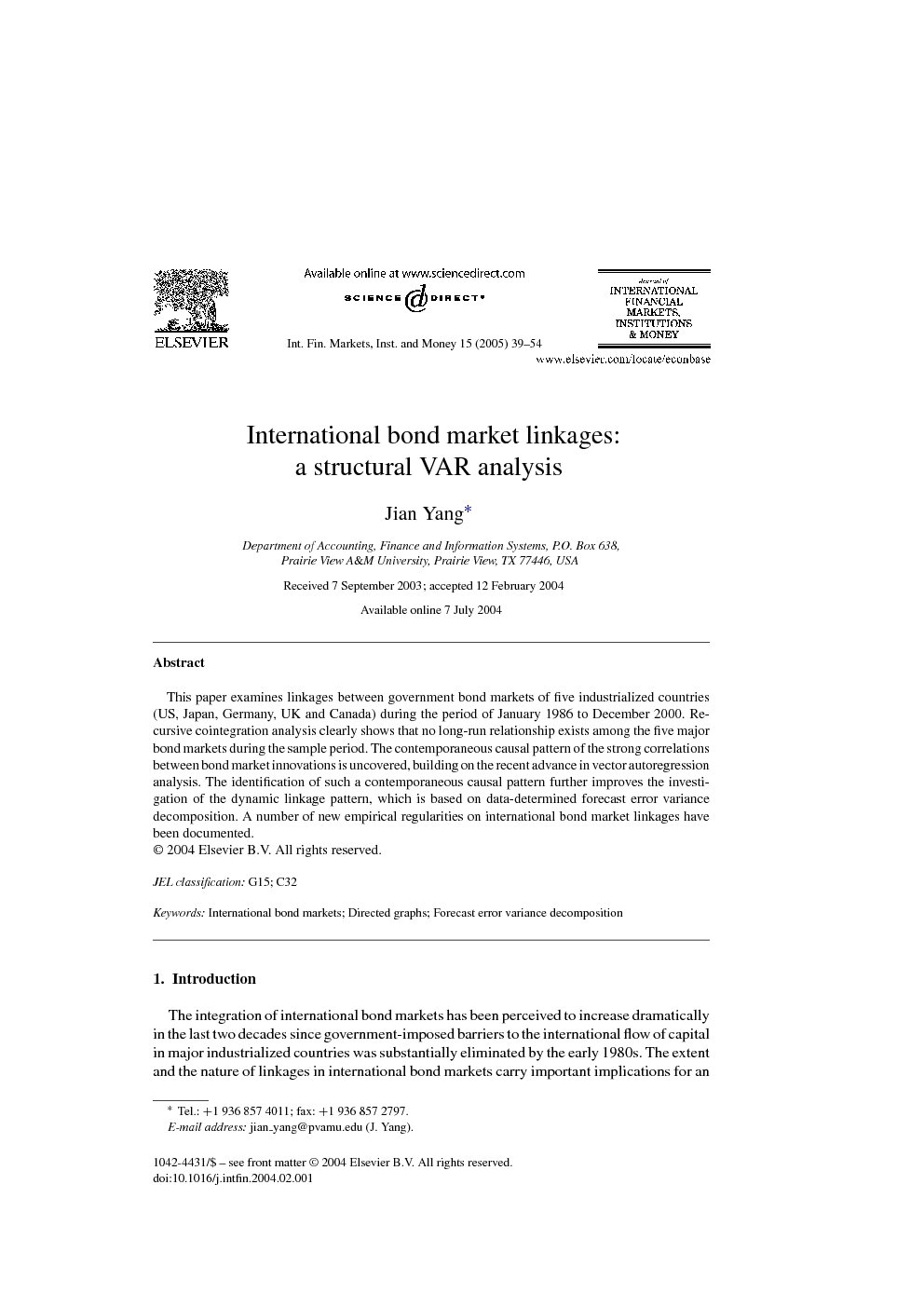 This paper examines linkages between government bond markets of five industrialized countries (US, Japan, Germany, UK and Canada) during the period of January 1986 to December 2000. Recursive cointegration analysis clearly shows that no long-run relationship exists among the five major bond markets during the sample period. The contemporaneous causal pattern of the strong correlations between bond market innovations is uncovered, building on the recent advance in vector autoregression analysis. The identification of such a contemporaneous causal pattern further improves the investigation of the dynamic linkage pattern, which is based on data-determined forecast error variance decomposition. A number of new empirical regularities on international bond market linkages have been documented.

The integration of international bond markets has been perceived to increase dramatically in the last two decades since government-imposed barriers to the international flow of capital in major industrialized countries was substantially eliminated by the early 1980s. The extent and the nature of linkages in international bond markets carry important implications for an independent monetary policymaking (e.g., Kirchgassner and Wolters, 1987 and Sutton, 2000), modeling and forecasting long-term interest rates (e.g., DeGennaro et al., 1994), and bond portfolio diversification (e.g., Clare et al., 1995). The theory does not provide unambiguous prediction on the extent and the nature of international bond market linkages. Bond yields or long-term interest rates can be viewed either as analogous to other assets prices or as policy instruments (Barassi et al., 2001). With substantially deregulated international financial markets and voluminous capital flows across borders, bond yields in different markets may be expected to move together to a certain extent, depending on the seriousness of the remaining barriers to market entry. Furthermore, the market-driven comovement of bond yields may be confounded by the degree of monetary policy independence sought by national authorities. Hence, the extent of international bond market linkages is essentially a matter of empirical testing. Compared to a large body of literature on international stock market linkages (e.g., Eun and Shim, 1989, Arshanapalli and Doukas, 1993, Francis and Leachman, 1998 and Bessler and Yang, 2003) and international money market linkages (e.g., Fung and Isberg, 1992 and Fung and Lo, 1995), only very few empirical works have examined linkages in international bond markets. Applying a cointegration technique, DeGennaro et al. (1994) and Clare et al. (1995) did not find any long-run cointegration relationship among government bond markets of several major industrialized countries. By contrast, Barassi et al. (2001) and Smith (2002) reported existence of cointegration in these markets. Kirchgassner and Wolters (1987) found strong contemporaneous/instantaneous relationships and mild Granger causal linkages between US and two European government bond markets after 1980. Sutton (2000, p. 368) argued that bond yields display excessive comovements in major government bond markets, which may be captured by contemporaneous correlations between bond yield innovations. Obviously, the empirical findings are inconclusive and represent a number of different perspectives, thus calling for a more thorough analysis. This paper more comprehensively examines international bond market linkages, including long-run cointegration relationships between bond yields, dynamic causal linkages between bond yield changes and contemporaneous relationships between bond yield innovations. The study contributes to the literature in several aspects. First, to shed light on the controversy over the (non)existence of cointegration in international bond markets, the stability of the long-run relationship is investigated by applying a recursive cointegration technique (Hansen and Johansen, 1993) to test how the (non)cointegration relationship holds at each point of time during the sample period. Such a consideration is important, as Elyasiani and Kocagil (2001) recently found that possible structural breaks in the (non)cointegration relationship may occur due to some significant events. Second, the important contemporaneous causal pattern of the strong correlations between market innovations is explored building on recent advances in vector autoregression (VAR) analysis (Swanson and Granger, 1997, Bessler and Yang, 2003, Haigh and Bessler, 2004 and Yang, 2003). Kirchgassner and Wolters (1987, p. 679) noted that “the instantaneous relations (among bond yield innovations) are probably much more important than the simple Granger causal relations (in international bond markets)”. Similarly, in Sutton’s (2000) model, excessive bond yield comovements are characterized by significant and positive correlations between bond yield innovations (p. 368).1 Thus far, the existing literature concludes that “with respect to the (contemporaneous causal) direction of instantaneous relations nothing can be derived from the data alone” (Kirchgassner and Wolters, 1987, p. 679). Building on Sims (1986) and Swanson and Granger (1997), this study is able to provide a data-determined solution to the issue. In a sense, the way of identifying the contemporaneous causal pattern in this study is also more data-determined than Swanson and Granger (1997) and Haigh and Bessler (2004). After allowing for zero first-order conditional correlation constraints exhibited in the data (as proposed by Swanson and Granger (1997)), we further use Sims’(1986) likelihood ratio tests rather than some economic theory priors to help determine the contemporaneous causal pattern. Third, identifying the contemporaneous causal pattern among innovations enables us to conduct a data-determined structural decomposition of VAR residuals. The dynamic linkage patterns between financial markets are often inferred from forecast error variance decomposition (e.g., Eun and Shim, 1989). As vigorously argued in Swanson and Granger (1997), compared to the widely used forecast error variance decomposition of Sims (1980), data-determined forecast error variance decomposition should be superior. In this context, this study may produce a more accurate description of dynamic linkages between international bond markets, due to its improved modeling technique. The rest of this paper is organized as follows. Section 2 discusses econometric methodology. Section 3 describes the data. Section 4 presents empirical results. Finally, Section 5 concludes the paper.

This paper examines linkages on government bond markets of five industrialized countries (US, Japan, Germany, UK and Canada) during the period of January 1986 to December 2000. Recursive cointegration analysis clearly shows that no long-run relationship exists among the five bond markets during the sample period. The finding supports DeGennaro et al. (1994) and Clare et al. (1995), but contradicts more recent studies of Barassi et al. (2001) and Smith (2002). Also, as found in Kirchgassner and Wolters (1987), there exist strong correlations between bond yield innovations. The causal pattern of such strong instantaneous relationships is uncovered, building on the recent advance in VAR analysis. We first document in the literature the following data-determined causal patterns between bond yield innovations: the contemporaneous causality running from Japan to Germany, from Germany to the UK, from the UK to the US, from the US to Canada. However, the causality running from Japan to Germany might be more or less tenuous, as the data cannot rule out the reverse direction of causality. We presume the direction from Japan to Germany because further forecast error variance decomposition result based on this ordering appears more sensible and more consistent with the multivariate Granger causality test results than based on the reverse ordering. The identification of the contemporaneous causal pattern further improves our investigation of the dynamic linkage pattern that is based on data-determined forecast error variance decomposition. Such a dynamic linkage pattern in international bond markets has not yet been seriously explored in the literature, with the possible exception of Kirchgassner and Wolters (1987). In general, the results in this study show that international bond markets are not completely segmented but instead are partially segmented in the short run and there is no distinctive leadership role. Specifically, we find that only the UK and Germany have some noticeable influence on the US over time. Consistent with the finding on international stock markets (Eun and Shim, 1989, Francis and Leachman, 1998 and Bessler and Yang, 2003), Japan is the most exogenous market and other countries have little influence on this market. Only Japan and the US have noticeable influence on the German market over time. Only Germany can significantly influence the UK over time, which supports the well-known hypothesis of German dominance (e.g., Uctum, 1999). The US is the only market that can significantly influence the Canadian market over time, which is similar to their stock market relationship (Eun and Shim, 1989 and Bessler and Yang, 2003). Noteworthy, however, is the relative influences of Japan and Germany on each other and their exogeneity may be reversed if the presumed contemporaneous causal direction from Japan to Germany is reversed. This sensitivity also underscores the importance of correctly modeling the contemporaneous causal relationships of VAR innovations, which has been well recognized theoretically but not often carefully addressed in empirical works due to lack of a satisfying technique. In this sense, the recent advance in VAR analysis as presented by Swanson and Granger (1997) should deserve more attention in future research. Finally, the findings of this study have some important implications for policymakers and investors. In particular, our ability of exploring international bond market linkage patterns at different time horizons may provide rich information to policymakers and investors with different decision horizons. First, in general, for national policymakers, an independent monetary policy with respect to long-term interest rates appears possible in the long run. In the short term (e.g., time periods up to a year), effectiveness of a country’s monetary policy may be substantially affected by policies of one or two other countries, which policymakers should take precaution against. Second, for investors with long investment horizons and passive portfolio management strategies, international diversification benefits can be exploited on their bond investments, as recommended by Levy and Lerman (1988) and Filatov et al. (1991). Investors can diversify their bond portfolios into any of other four major foreign bond markets, with little difference in terms of risk reduction. Investors who have shorter investment horizons or who are in favor of active bond portfolio management strategies, however, may use the identified contemporaneous causal pattern or short-run dynamic causal linkage pattern in the international bond markets to time different market movements. They may also diversify their bond portfolios into other markets which have little dynamic interaction with their own country market. For example, Canadian investors would be better off by diversifying into foreign bond markets other than the US market. Finally, the results suggest that although modeling and forecasting a country’s bond yields should be largely based on domestic macroeconomic variables, inclusion of one or two other countries’ macroeconomic variables may improve short-term forecasts of the country’s bond yields.