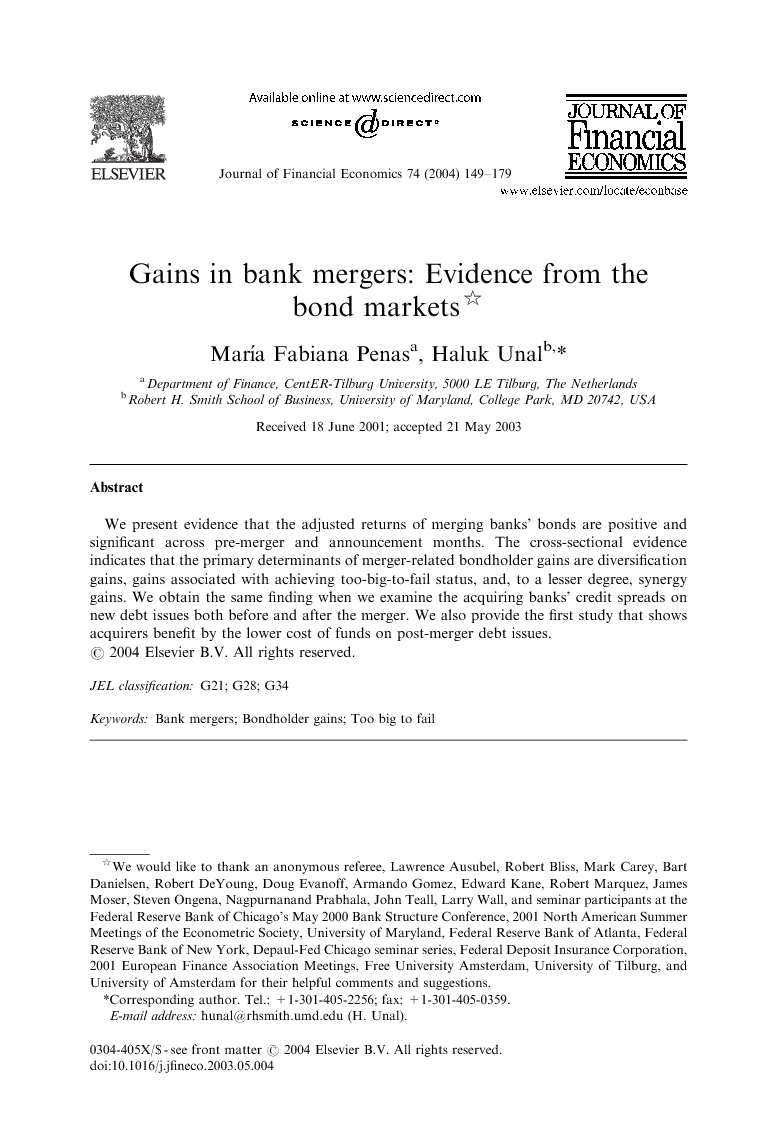 We present evidence that the adjusted returns of merging banks’ bonds are positive and significant across pre-merger and announcement months. The cross-sectional evidence indicates that the primary determinants of merger-related bondholder gains are diversification gains, gains associated with achieving too-big-to-fail status, and, to a lesser degree, synergy gains. We obtain the same finding when we examine the acquiring banks’ credit spreads on new debt issues both before and after the merger. We also provide the first study that shows acquirers benefit by the lower cost of funds on post-merger debt issues.

Corporate mergers can affect bondholders in several ways. If the merger is synergistic, both bondholders and shareholders gain because firm value can increase by achieving economies of scale and scope and by eliminating less-efficient management (see Jensen and Ruback, 1983). In nonsynergistic mergers, bondholders can still gain if the merger reduces cash flow volatility and leads to a lower risk of default (see, e.g., Lewellen, 1971; Higgins Schall,1975; Galai and Masulis, 1976). In the case of bank mergers there are at least two additional layers of complexity. First, the federal deposit insurer might consider the combined bank too big to fail (TBTF) as a result of the merger. This strategy allows all uninsured liabilities to have de facto insurance coverage and thereby maximizes the value of the implicit guarantees received from the government. Second, unlike nonfinancial firms, banks are subject to regulatory capital requirements. As a result, shareholders cannot simply increase leverage to make up for a merger that coinsures bondholders. Hence, even with no TBTF, bondholders could gain and shareholders could lose as bondholders expropriate some of the gains associated with the acquisition. To the best of our knowledge, no study has examined changes in required returns on banks’ debt around the time of a merger. In this paper we examine first the reaction of nonconvertible bond prices of both the acquiring and target banks around merger announcements, and then changes in the credit spread of the acquiring institution's new debt issues after the merger. Our results contrast sharply with those reported for mergers of nonfinancial firms. We observe that bondholders of both acquirer and target banks realize significant positive risk- and maturity-adjusted returns around the merger announcement month. During the seven consecutive pre-merger months and the announcement month, bondholders realize positive returns. The sum of cumulative adjusted bond returns is 4.3% for target banks during this period, significantly exceeding the acquiring banks’ bond returns of 1.2%. Overall, our findings indicate that bond market participants perceive the bank merger as a default-risk reducing event. Our cross-sectional tests focus on identifying the factors that determine the merger announcement month risk- and maturity-adjusted bond returns. Our analysis shows that all three possible rationales (diversification, TBTF, and, to a lesser degree, synergy) account for increased bondholder returns. The acquiring banks of our sample do not significantly increase their leverage ratios post-merger. This finding supports the argument that bank bondholders might benefit from the coinsurance effect. However, after we control for degree of diversification, geographic overlap, and expected changes in leverage and asset quality following merger, our analysis shows that the incremental asset size is a positive and significant determinant of the announcement month returns. We also find that bond returns do not increase monotonically with the asset size of the firm involved in the merger, which is consistent with the existence of TBTF gains. Bondholders of medium-size banks (those that can push the combined bank's asset size above the TBTF threshold asset size) realize the highest returns whereas bondholders of megabanks (those that can be considered TBTF at the time of merger) and smaller banks earn relatively lower adjusted returns. We provide evidence that the relation between announcement month abnormal equity returns and adjusted bond returns is positive and significant, which rules out the possibility that bondholders gain at the expense of equity holders. This evidence is consistent with both the TBTF and synergy rationales. In fact, we also find that the positive effect of the incremental size on adjusted bond returns is larger for in-state mergers, which can be explained by the realization of larger synergies and greater market power in this type of mergers. When we examine changes in credit spreads, our findings substantiate those of the bond-return analysis. We find that credit spreads are higher for those acquirers that attain less diversification (less reduction in equity volatility for the acquirer). After we control for bond characteristics, market conditions, and changes in the balance sheet variables due to leverage and non-performing loans, we find that only the medium-size banks realize significant credit-spread reductions. We estimate that the average decline in credit spreads for this group is around 15 basis points. We observe no significant credit-spread reduction in mergers that involve acquirers that can be considered very large banks or small banks. Again, we attribute this result to the existence of TBTF gains in bank mergers. The paper is organized as follows. Section 2 estimates and provides an analysis of bondholder returns around the merger announcement month. Section 3 estimates the changes in credit spreads of the acquiring banks’ new debt issues after the merger announcement. Section 4 concludes the paper.

This paper examines bond returns and bond credit spreads around the announcement of bank mergers during the 1991 through 1998 period. We show that bondholders of bidder and target banks gain significant positive bond returns in the months leading to the merger announcement. We also provide evidence that the relation between announcement-month bond and equity returns is positive and significant. This finding supports the argument that bank mergers are not shifting wealth from shareholders to bondholders. Our cross-sectional regressions identify diversification, TBTF, and, to a lesser degree, synergy as possible sources of these gains. We support these observations by showing that on average, the credit spreads in the acquiring bank's new bond issues decline significantly following the merger. After we control for bond and bank characteristics, the decline is significantly explained by the degree of diversification attained and whether or not the banks attain TBTF status as a result of the merger. Thus, this paper shows, for the first time, that one significant benefit to the acquirer is lower cost of funds on debt issues post-merger.