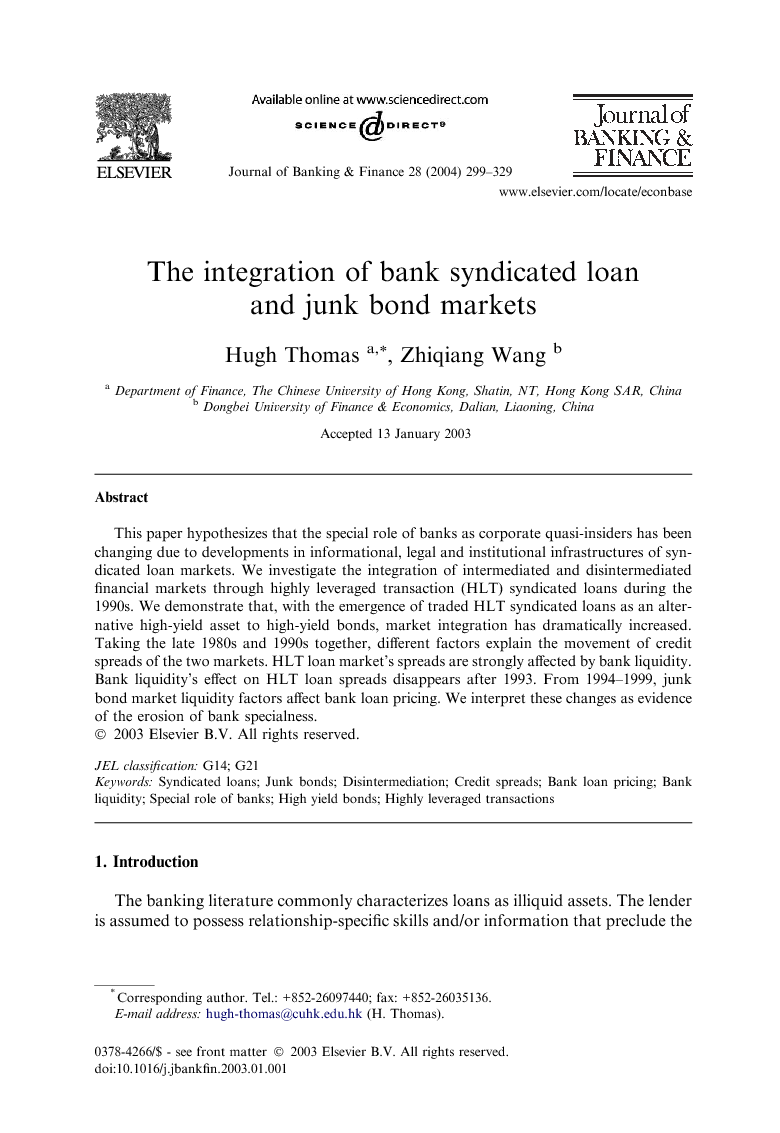 This paper hypothesizes that the special role of banks as corporate quasi-insiders has been changing due to developments in informational, legal and institutional infrastructures of syndicated loan markets. We investigate the integration of intermediated and disintermediated financial markets through highly leveraged transaction (HLT) syndicated loans during the 1990s. We demonstrate that, with the emergence of traded HLT syndicated loans as an alternative high-yield asset to high-yield bonds, market integration has dramatically increased. Taking the late 1980s and 1990s together, different factors explain the movement of credit spreads of the two markets. HLT loan market’s spreads are strongly affected by bank liquidity. Bank liquidity’s effect on HLT loan spreads disappears after 1993. From 1994–1999, junk bond market liquidity factors affect bank loan pricing. We interpret these changes as evidence of the erosion of bank specialness.

The banking literature commonly characterizes loans as illiquid assets. The lender is assumed to possess relationship-specific skills and/or information that preclude the efficient trading of loans in secondary markets where they would compete with public securities. This characterization helps us to understand the nature of banking, yet it is a simplification of reality. Loans have never been absolutely illiquid. Correspondent banks traditionally have been able to effect portfolio re-balancing by exchanging assets as long as the relationship between buyer and seller was strong enough to generate sufficient trust to mitigate informational asymmetries between them. Loan sales by bankruptcy trustees have long been a part of winding up failed banks. The marketability of bank loans, then, is a question of degree. Today, that degree is rapidly increasing. Banking is an information industry so it is not surprising that the 1990s revolution in information technology fundamentally affected banking. At the strategic level, leaders of the top banks around the world are unanimous that their models of business are undergoing substantial change.1 Secondary market loan trading has also developed radically. Legal changes set the stage for standardization of loan trading and a rapid rise in trading volumes. The Loan Syndication and Trading Association has been set up to facilitate this process. Bond rating agencies are now rating syndicated loans. Given these changes, the financial academic’s question, “why are banks special?” perhaps should be rephrased. In a recent article, Bossone (2001) asks, “Are transaction costs and information asymmetries being so dramatically reduced in modern financial systems that what was once special about issuing liquid liabilities and financing illiquid assets is hardly special at all, today?” Bossone answers his question from his theoretical analysis in the negative. We hypothesize that the special role of banks as corporate quasi-insiders has been changing due to developments in informational, legal and institutional infrastructures of syndicated loan markets. We take an empirical approach, focusing on one banking service: syndicated lending. We ask the question, “are syndicated loans special and, if they are, is that specialness being eroded?” We answer this question by examining the degree to which the pricing of loans that are traded on the secondary market is integrated with the pricing of bonds. We study highly leveraged transaction syndicated loans (HLTs)2 and compare their pricing to the pricing of high-yield bonds from January 1987 to December 1999. We build on the work of Angbazo et al. (1998) by estimating a model of the promised spread of HLTs above treasuries and comparing it to an estimated model of the yield spread of high-yield bonds above treasuries. We describe how the degree of segmentation between bank and bond markets has been severely eroded over the last decade. We show that from 1987 to 1993 an excess (lack) of liquidity in bank markets leads to price falls (rises) in HLT spreads but that this effect disappears from the period 1994–1999. We show that bond market liquidity has no independent effect on HLT pricing in the earlier period but that in the later period increases (decreases) in junk bond market liquidity lead to increases (decreases) in HLT spreads. In summary, we find strong evidence that, in this important part of the lending market, bank specialness is indeed changing. Our article is organized as follows. A brief introduction to the HLT market is found in Section 2. Section 3 is a review the literature on the specialness of banking and its relationship to syndicated lending. 4, 5 and 6 discuss our approach to measuring market integration, the data and our findings respectively. Section 7 concludes with a summary, a note concerning the degree to which our findings can be generalized to other banking services, a comment on similar findings in related studies and some suggestions for further research.