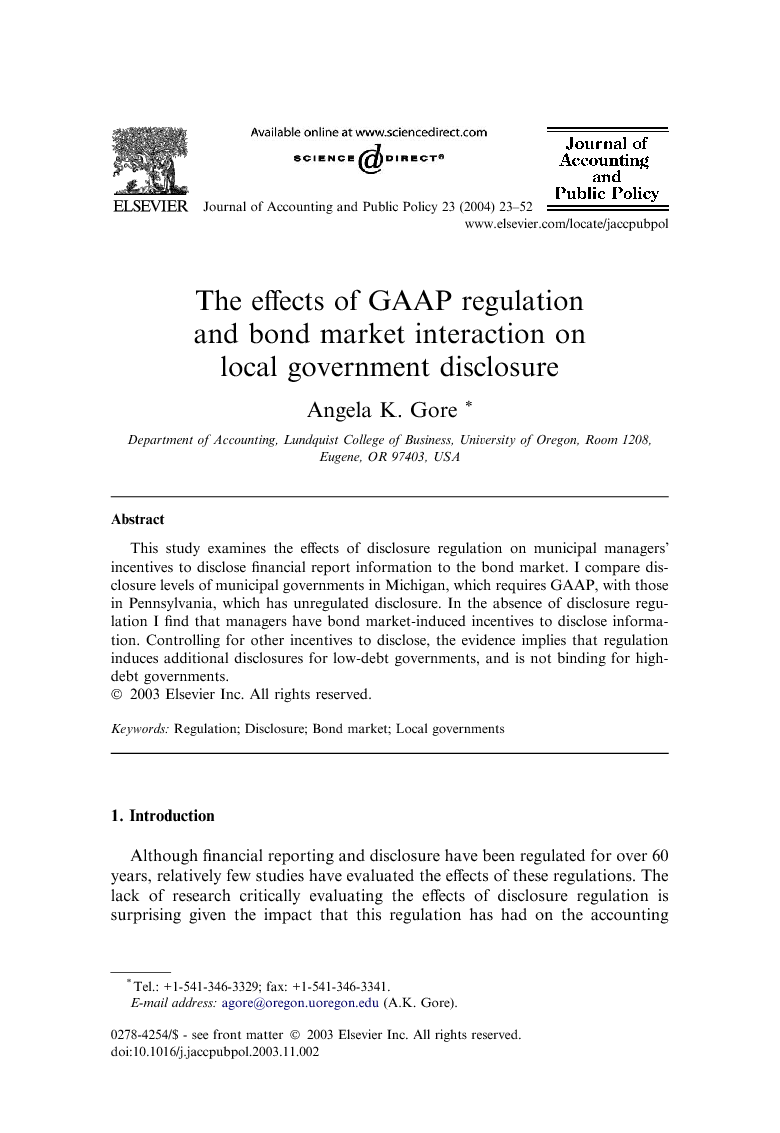 Although financial reporting and disclosure have been regulated for over 60 years, relatively few studies have evaluated the effects of these regulations. The lack of research critically evaluating the effects of disclosure regulation is surprising given the impact that this regulation has had on the accounting profession (Healy and Palepu, 2001). Disclosure regulation research is especially critical in light of recent calls for increased regulation due to the corporate accounting scandals. Regulation proponents assert that market failures necessitate mandatory disclosure, and that in the absence of regulation, organizations lack incentives to voluntarily disclose adequate levels of information. Critics argue that market forces produce optimal levels of disclosure, and provide arguments against the efficacy of market failures.1 Empirical evidence on disclosure regulation is extremely limited, however, primarily due to data constraints (Healy and Palepu, 2001). The purpose of my paper is to provide further empirical evidence about the effects of disclosure regulation on information production. I do so in the context of the municipal bond market, for two reasons. First, governmental GAAP is being made mandatory in many states at substantial cost. Second, because not all states require GAAP, municipalities allow an examination of disclosure regulation in a relatively controlled experiment. I first examine disclosure in an unregulated case, and hypothesize that bond market incentives are sufficient to induce disclosure. I next examine the influence of regulation on disclosure and hypothesize that for any given level of regulation, mandated disclosure induces information production for low-debt municipalities, and is non-binding for the rest. My empirical tests compare municipal disclosure levels in a state that requires GAAP (Michigan) with those in a state with unregulated disclosure (Pennsylvania).2 My analysis indicates two main results. First, in the unregulated state, I find a significant positive association between disclosure levels and proxies for bond market interaction. This evidence suggests that in the absence of regulation, municipal managers disclose financial information in response to bond market incentives. This result is interesting because prior studies have had conflicting results about the relation between disclosure and proxies for debt. For example, studies such as Robbins and Austin (1986) and Evans and Patton (1987) find positive relations, while others such as Evans and Patton (1983), Ingram and DeJong (1987) and Copley (1991) find either no statistically significant relation or report mixed results. It is also interesting because it shows municipal managers act rationally in response to capital market incentives, opening an avenue to future disclosure regulation research with implications that extend beyond the municipal sector. Second, I find that GAAP disclosure levels are significantly higher in the regulated state than in the unregulated state. The difference in disclosure levels is significantly smaller among those governments with higher debt, however, which implies two things. First, this evidence suggests that regulation is not binding for governments with high debt levels.3 In other words, regulated governments with high debt levels are required to disclose GAAP information that they would have voluntarily disclosed in the absence of regulation. Second, it implies that regulation induces the production of information, or is binding, for governments with low debt levels, indicating that these governments may incur costs by being forced to disclose more information than the market requires. These results are interesting given that prior governmental research (e.g., Ingram and DeJong, 1987; Copley, 1991) does not find a significant difference in disclosure level between states that require GAAP and states with unregulated disclosure. The evidence presented in this paper is relevant for evaluating the implications of the recent trend of increasing GAAP disclosure requirements (Barth and Murphy, 1994). For example, the GASB recently enacted a new disclosure standard for governments that expands the level of required disclosures (GASB Statement No. 34). Opposition has been strong, due to the costs of implementing and monitoring this standard, and due to questions about whether there is demand for the information (Copley et al., 1997). My results suggest there is an economic basis for governments’ choice to voluntarily provide financial information. Mandating more information imposes costs on governments with lower bond market interaction, and ultimately the taxpayers, while conferring benefits to public accountants by increasing monitoring costs. One caveat needs to be considered when interpreting my results, however. My analysis focuses on disclosure incentives in the context of bond markets. Therefore, I do not consider alternative perspectives addressed in prior studies, such as disclosure incentives derived from political markets (Baber, 1990). However, as discussed later in the paper, there is a growing body of evidence that indicates capital market participants are the primary users of the financial reports, while voters rarely use them. In addition, while I do not focus on political incentives to disclose, I do use control variables to represent them in the empirical analysis. The remainder of the paper is organized as follows. In Section 2, I discuss the governmental accounting environment, and in Section 3, the theory and hypothesis development. Section 4 describes the research design, Section 5 discusses the results, while Section 6 concludes.

The purpose of this paper is to examine the effects of disclosure regulation and bond market interaction on information production, using data from the governmental sector. I compare disclosure in Michigan, a state that requires GAAP, with that of Pennsylvania, a state with unregulated disclosure. My analysis indicates two main results. First, within the unregulated disclosure state, I find a significant positive association between disclosure level and proxies for the level of bond market interaction. This result suggests that in the absence of regulation, municipal managers disclose financial report information because they have bond market-induced incentives to do so. Second, I find that the level of GAAP disclosure is significantly higher in the regulated state than in the unregulated state. The difference in disclosure levels between states is significantly smaller among those governments with higher debt, however, which implies two things. First, although somewhat mixed, this evidence suggests that regulation is not binding for governments with high debt levels. In other words, regulated governments with high debt levels are required to disclose GAAP information that they would have voluntarily disclosed in the absence of regulation. Second, it implies that regulation induces the production of information, or is binding, for governments with low debt levels. The latter result suggests that mandating GAAP information imposes costs on governments with lower bond market interaction, and ultimately the taxpayers, while conferring benefits to public accountants through monitoring costs. My study examines disclosure levels for the governmental sector for one year. This focus enables a more precise analysis of some of the consequences of accounting regulation. However, it also means the results may not be generalized to the corporate sector and/or other time periods. This issue could be addressed in future studies by applying a similar methodology to research areas where corporate disclosure is differentially regulated, for example, in international research. Another limitation is that because some of the tests examine whether the difference in disclosure between the two states is not significantly different from zero, it is possible that the insignificance is due to model misspecification. A final limitation of this study is that it necessarily restricts the examination of disclosure to a bond market perspective. However, as discussed previously, both focus groups commissioned by the GASB as well as prior academic research indicate that bond market participants are the primary users of municipal financial reports. An additional benefit of the bond market focus is that it allows analysis of non-political incentives to disclose, an area of the governmental literature not extensively explored.