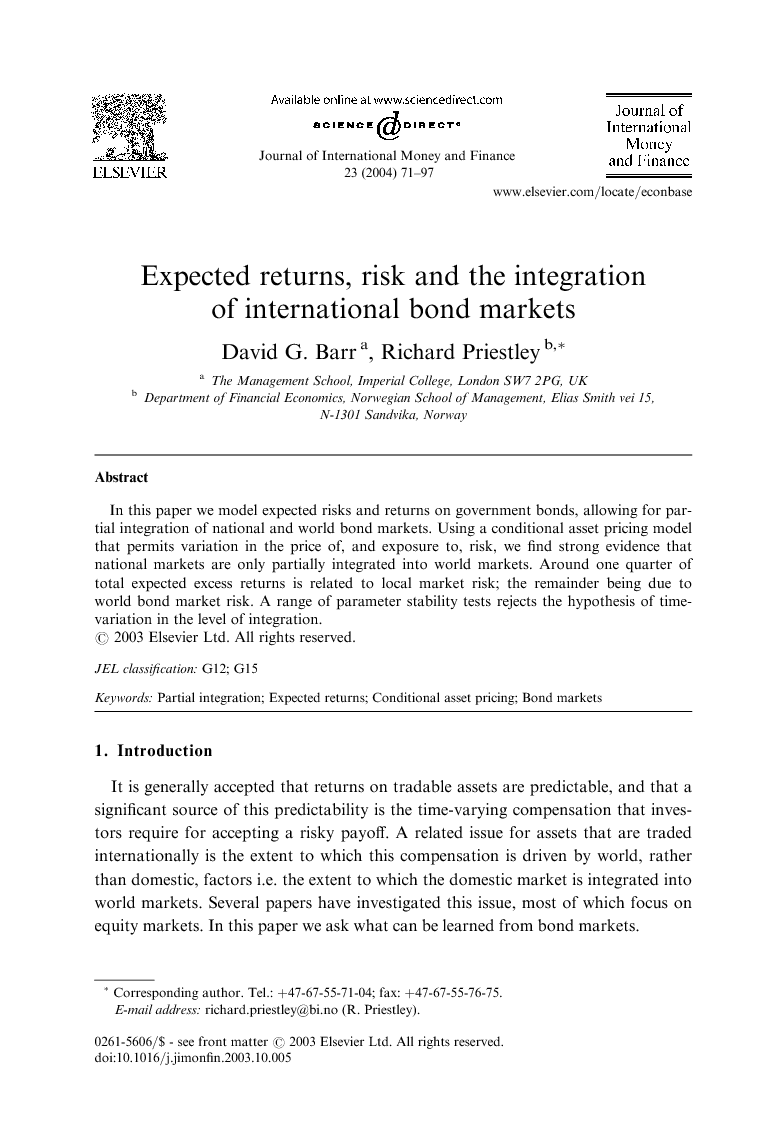 In this paper we model expected risks and returns on government bonds, allowing for partial integration of national and world bond markets. Using a conditional asset pricing model that permits variation in the price of, and exposure to, risk, we find strong evidence that national markets are only partially integrated into world markets. Around one quarter of total expected excess returns is related to local market risk; the remainder being due to world bond market risk. A range of parameter stability tests rejects the hypothesis of time-variation in the level of integration.

It is generally accepted that returns on tradable assets are predictable, and that a significant source of this predictability is the time-varying compensation that investors require for accepting a risky payoff. A related issue for assets that are traded internationally is the extent to which this compensation is driven by world, rather than domestic, factors i.e. the extent to which the domestic market is integrated into world markets. Several papers have investigated this issue, most of which focus on equity markets. In this paper we ask what can be learned from bond markets. Econometric models describing this predictability typically fall into either or both of two groups. The first employs “information variables” which, since they are jointly determined with asset prices, contain information about expected returns. The second uses explicit asset pricing models (APMs) to relate expected returns to measures of investor preferences, factor risks and asset specific factor loadings, or betas. Various instruments are used to capture changes in risk aversion, and to proxy the factors (Ferson and Harvey, 1991 and Harvey et al., 1994), while ARCH processes are commonly used to model changes in asset betas (see Bollerslev et al., 1988). The challenge for the asset pricing models is to account for the predictability that is evident from the information-variable models. One way forward is to assume that markets are fully integrated, and to test the restrictions generated by APMs: a rejection being interpreted as a rejection of the joint hypothesis of full integration and the APM (Dumas and Solnik, 1995). This integration assumption reflects a fundamental difficulty in international asset pricing however: while the information-variable approach embraces the possibility of partial integration without difficulty, current APMs can accommodate only the two extremes of integration or segmentation, and both of these will be rejected if markets are only partially integrated. Some combination of the polar models is required in order to deal with partially integrated markets. Errunza and Losq, 1985 and Errunza et al., 1992 divide the available assets into those that are traded internationally, and those that trade only domestically. More-recent work, such as Bekaert and Harvey, 1995 and Andrews, 1994 combines the polar models, and allows the level of integration to change over time. Although most international-market studies have focused on equities, bonds do appear in several investigations, but rarely as the main focus. Exceptions are Ilmanen, 1995 and Ilmanen, 1996, who finds evidence of predictability that is just as compelling as that for equity markets, Harvey et al. (1994), who find that the factors driving bond returns are the same as those driving equity returns, and Jorion (1992)1.Bollerslev et al. (1988) find a significant role for government bonds and bills, alongside equities, in a 3-asset conditional CAPM for the US, and Giovannini and Jorion (1989) include bonds in the world market portfolio. There are many possible impediments to complete integration (see Jorion, 1992 for a wide-ranging discussion). These include legal restrictions, imperfect information, asymmetric treatment of withholding taxes and associated credits (Solnik, 2000), home bias, where investors fail to optimse over a worldwide portfolio even in the absence of institutional impediments to capital flows (Stulz, 1999) and local market conventions. For example, the timing of UK auctions of government stock was set on an ad-hoc basis during our sample; an arrangement that was designed to minimise funding costs, but which also reduced price volatility and risk. In Japan, the market for medium-term bonds tends to be less liquid than in other countries as domestic investors tend to buy-and-hold, rather than trade actively (see Fabozzi, 1996). It seems reasonable to expect bond markets to be more closely integrated than equity markets, largely because differences between bonds in different countries are small. Nevertheless there are reasons to believe that they might not be fully integrated. Home bias, for example, may influence bond investors, as the information requirements associated with local monetary and fiscal policies, expected inflation, and the behaviour of local investors may lead overseas investors to stay home. Similarly, institutions with liabilities denominated in domestic currency may prefer to hedge these with domestic bonds. One aspect of segregation is immediately apparent: the biggest players in the market, the issuers themselves, only rarely issue debt in foreign currency. This reflects both international protocol and the fact that the issuers’ liabilities, and tax flows, are predominantly denominated in domestic currency. The economic costs and benefits of bond-market integration are likely to be significant. In particular, the ability and willingness of investors to diversify internationally should lead to a reduction in the cost of fiscal deficit funding worldwide, just as equity market diversification may reduce the world cost of capital (Stulz, 1999). In this paper we use a version of Bekaert and Harvey’s (1995) CAPM-based model to investigate the level of integration in five of the major world bond markets. We allow for time-varying prices of risk, time-varying exposure to risk, and test for variation in the level of integration itself. The rest of the paper is organized as follows. Section 2 presents the asset pricing equations and the econometric methods used to estimate them. Section 3 discusses the data and its sources, while Section 4 presents our central, and preferred, results. The robustness of these results is tested against alternative versions of the model in Section 5. The final section concludes and suggests avenues for further research.

In this paper we have shown that the widely accepted ability of certain information variables to predict excess returns on government bonds can be explained by an asset pricing model in which the market prices of risk depend on the information variables, and in which the quantities of risk are driven by ARCH processes. The model indicates the presence of both domestic and world risk factors. The average contribution of world factors to domestic returns across our 5 countries is only 70%. This level seems surprisingly low in view of the absence of impediments to cross-country investment, and of the near homogeneity of bonds across countries. This estimate implies that the full benefits of international diversification have not been realised in government bond markets, that the world price of bond risk is higher than it need be, and that governments are currently paying too high a rate for their deficit funding. Furthermore, it suggests that bond markets may not be exerting as much anti-inflation discipline as they could if the markets were fully integrated. These observations may, of course, be linked: governments may be willing to continue to pay unnecessarily high funding costs in order to escape the discipline that would be exerted by a fully integrated world bond market. We reject the hypothesis that the extent of international integration of the major bond markets changed during our sample period. Our results suggest several avenues for further research. First, the theoretical foundations of the Bekaert and Harvey (1995) pricing model used here could be addressed. Our results, and those of Bekaert and Harvey themselves, suggest that resolving this issue is worthwhile. Second, we have considered only a few determinants of time-variation in integration, but there may be others, particularly where the major markets are not involved. Third, we have only scratched the surface of the question of integration across stock and bond markets. Considerably more examination of this issue is warranted, both from the perspective of pricing models, and at the more fundamental level of investor behaviour and practical portfolio management.24 Fourth, by limiting ourselves to information variables, we have not addressed the fundamental risk factors influencing expected returns domestically and internationally. Fifth, we have speculated about a possible link between integration, funding costs and anti-inflation discipline. There is clearly more work to be done here, both with small macroeconomic models, and by incorporating inflation data into the empirical analysis, along with an examination of the impact and behaviour of inflation-indexed bonds in the UK and the US. Several of these areas for further research have been left open because the computational demands of investigating them are substantial. With developments in computer technology and estimation techniques it is not unreasonable to expect that in due course a fully specified model embracing many or all of these areas should be feasible.