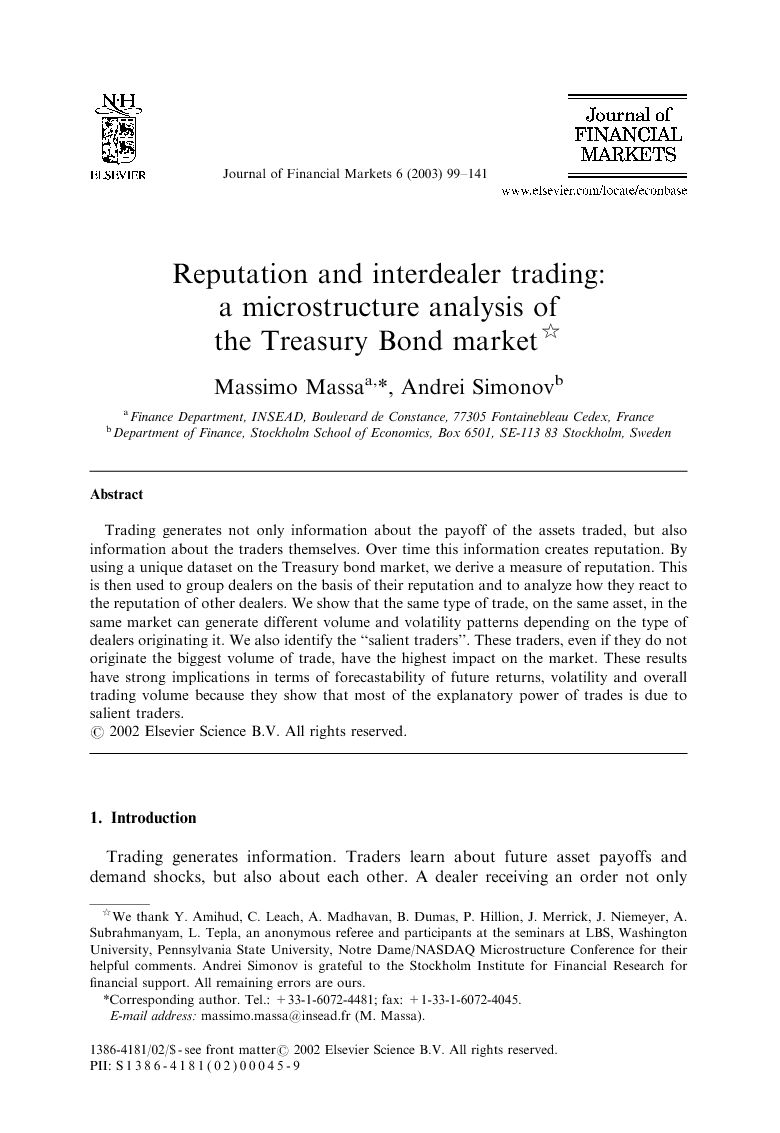 Trading generates not only information about the payoff of the assets traded, but also information about the traders themselves. Over time this information creates reputation. By using a unique dataset on the Treasury bond market, we derive a measure of reputation. This is then used to group dealers on the basis of their reputation and to analyze how they react to the reputation of other dealers. We show that the same type of trade, on the same asset, in the same market can generate different volume and volatility patterns depending on the type of dealers originating it. We also identify the “salient traders”. These traders, even if they do not originate the biggest volume of trade, have the highest impact on the market. These results have strong implications in terms of forecastability of future returns, volatility and overall trading volume because they show that most of the explanatory power of trades is due to salient traders.

We studied the impact of reputation on dealers’ behavior. We identified different classes of dealers defined in terms of their perception of the ability of the other dealers surrounding them as well as in terms of the perception that the overall market has about their ability. We also grouped them in terms of the way they strategically react to the informational content of the incoming trade on the basis of the reputation of the dealers placing it. Among these dealers, we identified the “salient” ones, that is the dealers whose trades have the strongest market impact. We showed that in the very short run, the market is less deep when the trade has been originated by a salient dealer and that the trade originated by salient dealers has a stronger impact over time. Moreover, we showed that the differential impact is still statistically significant at the end of the day and that the daily trade of the salient dealers impacts the market more than the one originated by the other classes of traders. Differences in impact seem to correspond to differences in profitability, that is dealers belonging to different classes display statistically different profits. We used the fact that salient dealers consistently have a stronger impact both in the short term and in the long term, to construct leading indicators of future market conditions. In particular, we showed that the trades of the salient dealers have a higher out-of-sample power to forecast future returns, volume and volatility than the trade of the other classes of dealer as well as the overall aggregated trade, at every time horizon. These results provide many implications for future theoretical research. One possibility is the formal relaxation of the assumption of market anonymity, so as to make the determination of prices for the market maker and the reaction of the dealers dependent on the identity of the dealer placing the incoming order. Moreover, it would be interesting to directly analyze the implications of allowing the market maker to optimally choose between changing the bid–ask spread and directly placing orders with other dealers. Also, our analysis has been restricted to the trade in the secondary market. We can conjecture that dealers may coordinate their behavior in both the primary and the secondary market when there is an auction. This would involve an analysis of the joint trade in the two markets as well as an investigation of how the standard models of bidding behavior at the auction have to be changed once the reputation developed in the secondary market is accounted for. These results also may help to shed some light on the interaction between the type of market structure and its institutional features. Indeed, reputation and dealers strategic interaction depend on the amount of information existing in the market and therefore on the degree of transparency dealers deal with. It would be also interesting to consider how regulation should tackle the issue of endogenous development of reputation among market participants. In particular, it is possible that some types of regulations and disclosure rules may prevent the development of reputation or may make it very short-term. If reputation favors a quick impounding of information in prices, this enforced transparency may paradoxically hamper market efficiency.