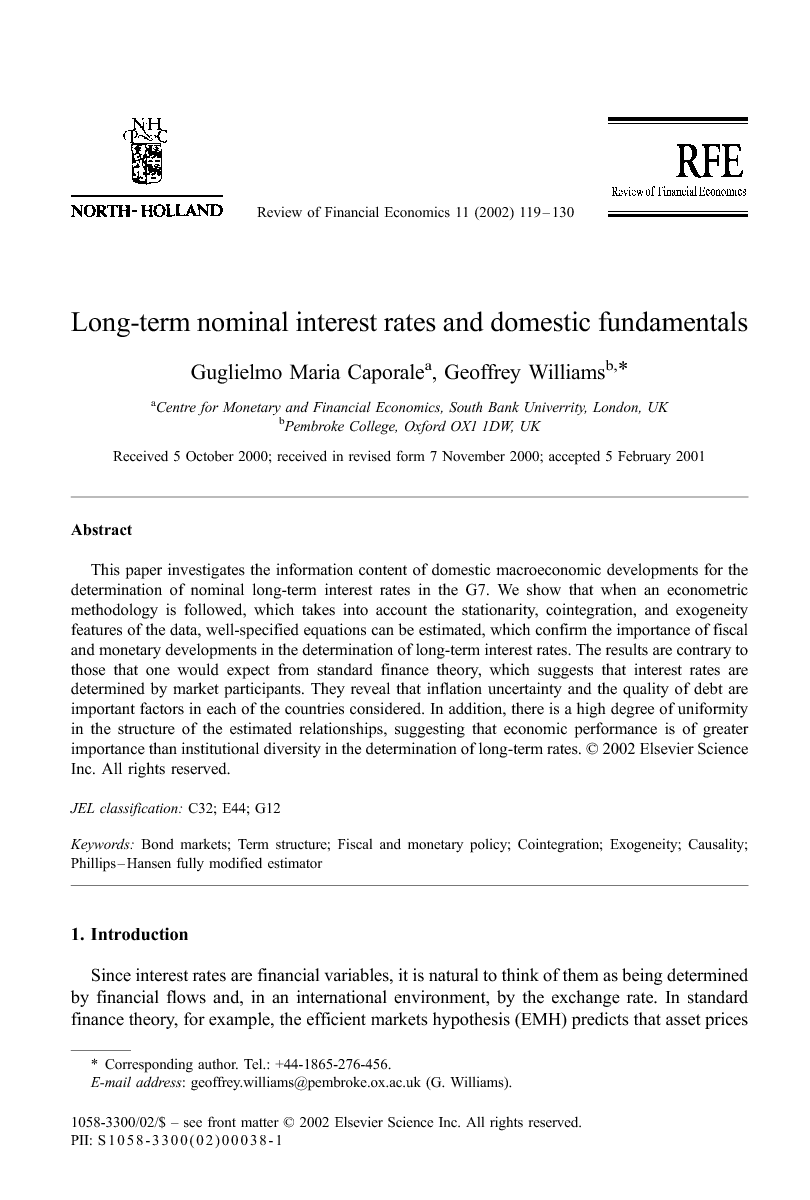 This paper investigates the information content of domestic macroeconomic developments for the determination of nominal long-term interest rates in the G7. We show that when an econometric methodology is followed, which takes into account the stationarity, cointegration, and exogeneity features of the data, well-specified equations can be estimated, which confirm the importance of fiscal and monetary developments in the determination of long-term interest rates. The results are contrary to those that one would expect from standard finance theory, which suggests that interest rates are determined by market participants. They reveal that inflation uncertainty and the quality of debt are important factors in each of the countries considered. In addition, there is a high degree of uniformity in the structure of the estimated relationships, suggesting that economic performance is of greater importance than institutional diversity in the determination of long-term rates.

Since interest rates are financial variables, it is natural to think of them as being determined by financial flows and, in an international environment, by the exchange rate. In standard finance theory, for example, the efficient markets hypothesis (EMH) predicts that asset prices will reflect all relevant market information and will be determined by arbitrage amongst market participants. It is therefore often claimed that the behaviour of interest rates will not be affected in an obvious way by domestic macroeconomic variables such as inflation, budget deficits, the stock of debt, or growth performance. However, it is equally plausible to assume that the risk premia associated with the term of a bond are linked to policy developments, especially budgetary positions, which have implications for the sustainability of fiscal policy in individual countries. This would suggest that macroeconomic performance is likely to be crucial for developments in bond markets. In this paper, we focus on interest rate determination in individual countries and attempt to explain it in terms of macroeconomic developments. To capture the possible impact of domestic economic performance, we allow long-term rates to be influenced by economic growth, inflation, and short-term rates, and we look at not only the budget deficit, which is a flow variable, but also the stock of accumulated debt. This can be viewed as a proxy for country risk, since it is an element of judgement for investors when determining the share of a given country's bonds in their portfolio. On the one hand, if a given country's debt to GDP ratio is high, Treasury bonds will be riskier, and an additional premium will be required, resulting in a positive relationship between these two variables. Alternatively, portfolio theory predicts that if new issues of debt are of high quality, investors may switch into them away from poorer quality debt, that is, good quality debt will drive out poor quality debt. The share of high-risk debt in investors' portfolios will fall, reducing the risk premium, and the price of new issues will rise so reducing the yield. We might therefore observe a negative relationship between the debt ratio and the interest rate. Using a proxy avoids the problem of finding an adequate direct measure of the default factor. In other empirical studies, for example, Giovannini and Piga (1994), this is normally obtained by comparing the yields of bonds issued in the same currency by different countries although such issues are often very illiquid. Alternatively, Favero, Giavazzi, and Sparenta (1997) derive a proxy as a residual category, having subtracted the expectations of exchange rate depreciation and withholding taxes from the total spread. The present study is also related to the large body of literature, which examines the relationship between fiscal variables and interest rates in order to test the Barro-Ricardian Equivalence Hypothesis, surveyed extensively in Seater (1993). The framework that we adopt allows us to test this hypothesis by examining the neutrality of long-term rates with respect to government borrowing. Our empirical approach adopts a single-equation framework but corrects for possible shortcomings in previous studies such as Correia-Nunes and Stemitsiotis (1995), the results of which are vitiated by their failure to deal properly with the nonstationarity, cointegration, and exogeneity features of the data when estimating single equations. Asymptotic inference is affected by the presence of unit roots and cointegration of the series involved. In particular, Phillips (1991) argues that using single-equation techniques in a cointegrated framework where some of the regressors are not exogenous will import bias and nuisance parameters into the limiting distributions of the estimators the consequences of which are more serious than in the context of classical regression. Our econometric approach tackles these issues directly. We find that across the G7, domestic macroeconomic fundamentals, not just financial market activity, are significant determinants of nominal long-term rates. In particular, fiscal trajectories and the quality of government debt play an important role. For countries with low debt ratios, increasing debt reduces rates due to a portfolio effect, whilst for countries with high debt ratios, increasing debt tends to increase the required return so interest rates rise. Japan is the only country where long-term rates do not appear to be affected by public debt. In addition, expected inflation is important and in countries with volatile inflation records has a greater role than in those with low and stable inflation records. The results are contrary to what would be expected within the efficient markets, pure expectations framework, and the impact of expected inflation is always different than would be predicted by the standard Fisher effect. Further, the neutrality of interest rates to debt issues, which is predicted by the New Classical Barro-Ricardian equivalence, is rejected. Instead, the evidence demonstrates a clear role for economic policy in affecting the level of the long-term nominal interest rate. Institutional differences between countries account for relatively minor variations in the estimated relationships, suggesting that economic performance is a more important factor in explaining interest rate differences between countries. The layout of the paper is as follows. Section 2 describes the theoretical framework that we adopt. Section 3 outlines our econometric methodology. Section 4 presents the empirical results and Section 5 offers some concluding remarks.

This study has presented some empirical evidence on the relationship between bond markets and macroeconomic developments in the G7. This has been analysed by employing an econometric approach, which takes into account the stationarity, cointegration, and exogeneity features of the variables of interest. This is typically not done in other studies, which makes their results unreliable. When applied to long-term interest rates in the G7, the techniques that we use deliver well-specified relationships that have a clear and intuitive economic interpretation. The estimated equations give support to the idea that interest rates are significantly affected by macroeconomic factors and that policymakers, especially fiscal authorities, as well as market participants play a key role. In particular, fiscal trajectories and the quality of government debt are important. For countries with high-quality bonds, increasing debt reduces rates since agents switch from lower quality issues, whilst for countries with high debt ratios, increasing debt tends to increase the required return so interest rates rise. Japan is the only country where long-term rates do not appear to be affected by public debt. Inflation expectations are also important. In countries with a history of volatile inflation, expectations play a greater role than in those with a history of low and stable inflation. The results are contrary to the predictions of the standard efficient markets, pure expectations framework and do not support other standard finance theories. For example, the impact of expected inflation is always different than would be predicted by the standard Fisher effect. We are also able to test the neutrality of interest rates to debt issues, which is predicted by the New Classical Barro-Ricardian equivalence. We find no evidence to support this hypothesis in the countries that we study. Instead, the evidence demonstrates a clear role for economic policy in affecting the level of the long-term nominal interest rate. Institutional differences between countries account for relatively minor variations in the estimated relationships. We interpret this as suggesting that economic performance is a more important factor in explaining interest rate differences between countries than economic structure.