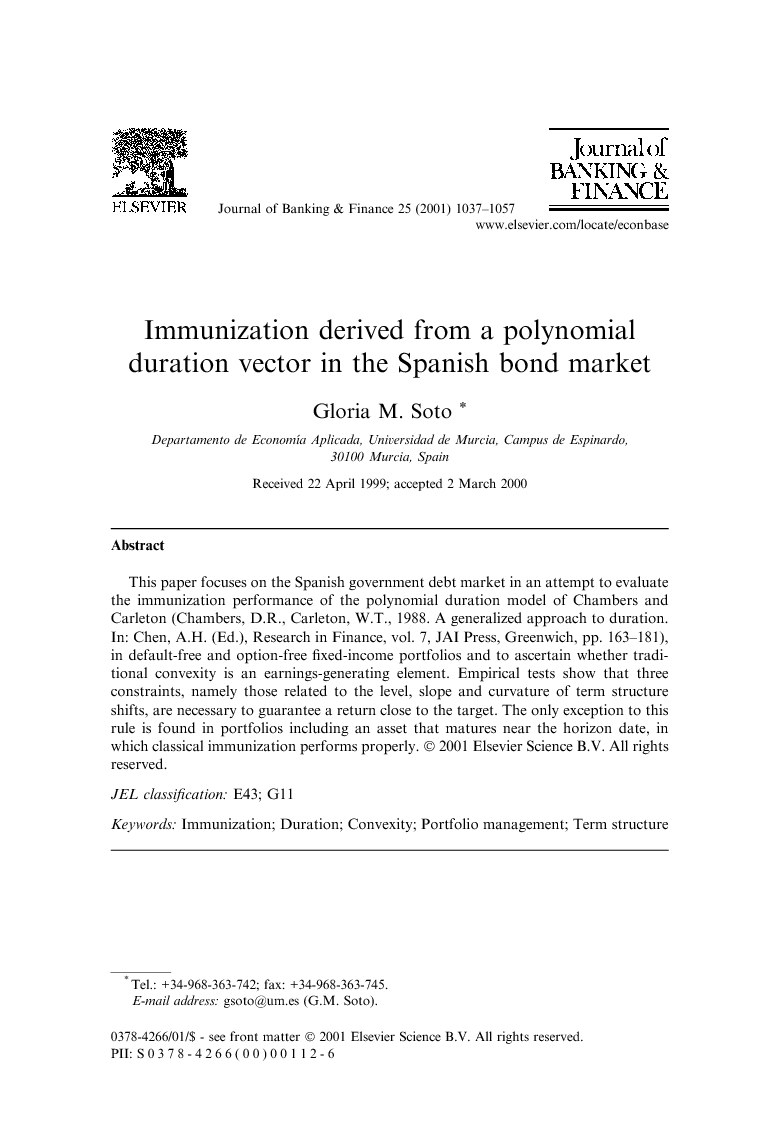 This paper focuses on the Spanish government debt market in an attempt to evaluate the immunization performance of the polynomial duration model of Chambers and Carleton (Chambers, D.R., Carleton, W.T., 1988. A generalized approach to duration. In: Chen, A.H. (Ed.), Research in Finance, vol. 7, JAI Press, Greenwich, pp. 163–181), in default-free and option-free fixed-income portfolios and to ascertain whether traditional convexity is an earnings-generating element. Empirical tests show that three constraints, namely those related to the level, slope and curvature of term structure shifts, are necessary to guarantee a return close to the target. The only exception to this rule is found in portfolios including an asset that matures near the horizon date, in which classical immunization performs properly.

Duration and convexity are well-known concepts in the area of interest risk management. However, the simplicity that characterizes both concepts is based on an extreme simplification of interest rate movements, which are defined as parallel and instantaneous shifts in the term structure of interest rates. This unreliable assumption has motivated the development of alternative formulations that try to capture more effectively the real risk of fixed-income portfolios during the last 25 years. More particularly, recent years have seen many refinements of duration models towards what we may call empirical multiple factor duration models, that is, models involving several duration measures that look for reality-based relations between interest rate changes, with no reference to theoretical arguments about the stochastic dynamic of markets. Such empirical multiple factor duration models could be categorized into directional duration models, partial duration models and polynomial duration models. The first group, directional duration models, attempts to use movements in the term structure of interest rates to deduce the state variables, observable or not, which govern changes of the whole curve. This type of model is found, among others, in Elton et al., 1990, Litterman and Scheinkman, 1991 and Navarro and Nave, 1997 and Barber and Copper (1996). Partial duration models explain interest rate changes by shifts in the level of the different segments into which the term structure is subdivided or by shifts in a limited number of interest rates. Specifically, we refer to the models of Ho, 1992, Reitano, 1990, Reitano, 1992, Reitano, 1993 and Reitano, 1996 and Johnson and Meyer (1989). Finally, polynomial duration models have their origin in the works of Chambers and Carleton (1988) and Prisman and Shores (1988), who assume a polynomial fitting of term structure shifts. A more generalized approach is suggested by Nawalkha and Chambers (1997), who derive a polynomial bond return generating function without requiring that term structure shifts be expressed as a polynomial.1 Without any doubt, the least restrictive model is the polynomial duration model, since it does not require, as the others do, the relation between interest rates to be constant or the segmentation of the term structure into an arbitrary number of segments or vertices. The only prerequisite of this model is that the bond return generating function must be expressed as a polynomial. This article deals with the polynomial duration model in order to: (i) ascertain its capacity to immunize2 portfolios of Spanish government bonds and confirm the role of portfolio design in the attainment of immunization and (ii) offer empirical evidence about the desirability of convexity, which is generally considered an element to be maximized in fixed-income portfolios. The sample period covers the period from January 1992 to December 1995. Although it is a short sample, because the Spanish government debt market was not sufficiently liquid prior to these dates, it constitutes a very valuable period for analyzing immunization because the Spanish term structure was extremely volatile during this period, as it was in other European countries. During this time, the Spanish market suffered (i) the credibility crisis of the European Monetary System from the last quarter of 1992 to the middle of 1993, (ii) the instability of the international debt markets during 1994, which was most severe in the case of European markets, and (iii) a change in the monetary policy of the Bank of Spain in 1995. All these forces resulted in a net decrease in interest rates of nearly 300 basis points and a drastic change in the shape of the term structure from a clear downward slope to an upward slope. This work constitutes the first approach to a European fixed-income market that intends to examine the degree of immunization achievable by duration models. Moreover, convexity is not usually held up to empirical analysis.3 The structure of this paper is as follows. In Section 2 the polynomial duration model and its implications for immunization are briefly described. Section 3 presents relevant information on the Spanish government debt market and the data used. Section 4 describes and discusses the design and results of the empirical study. Finally, conclusions are stated in Section 5.

Focusing on one of the most dynamic European fixed-income markets, the Spanish bond market, this study has analyzed the immunization performance of several duration-matching and maturity-matching strategies, taking into account the implications of portfolio design on immunization results. In addition, empirical evidence concerning the magnitude of the second-order effects of shifts has been offered, providing an answer to the question of whether maximizing traditional convexity is the correct policy. The results obtained by the polynomial duration model of Chambers and Carleton (1988) in Spanish bond portfolios with one- and two-year holding periods over the period January 1992 to December 1995 suggest that the immunization performance of duration-matching portfolios increases as the number of duration constraints grows. For this result to occur, care must be taken in monitoring the fulfillment of the successive duration targets. The only exception to this improvement is found in portfolios that include an asset maturing near the end of the holding period (equivalent, in this work, to the minimum M-Absolute asset). For these portfolios, possibly favored to some extent by the short horizons considered, the traditional immunization strategy is sufficient to guarantee a return notably close to the target return. This fact, which supports the findings of Fooladi and Roberts (1992) and Bierwag et al. (1993), is justified by the high similarity between these portfolios and a supposed zero-coupon bond that matures at the horizon date. This parallelism is evident from the slight exposure to non-parallel shifts in the term structure of the portfolios. Therefore, the inclusion of additional immunization constraints does not compensate for the greater need of reallocations in the portfolios. Hence, the optimum immunization strategy in our set of portfolios including a maturity bond is simply the traditional one. On the other hand, portfolios without a maturity bond require a minimum of three duration constraints to match the initial zero-coupon rate. Considering the first three elements of the polynomial duration vector, the degree of immunization improves to the point that, in certain instances, the results surpass those obtained with the mat-mat strategy with short horizons. The substantial improvement in immunization obtained when moving from two to three duration constraints corroborates the unfavorable results obtained by Bierwag et al. (1993) for portfolios with zero-M2 compared with portfolios including a maturity bond and immunized against parallel shifts in the term structure. Finally, in the period 1992–1995, traditional convexity is shown not to have been a desirable element in Spanish bond portfolios, contrary to the dictum “the benter, the better” but consistent with the empirical results of Kahn and Lochoff (1990) and Lacey and Nawalkha (1993). This is due to the fact that the magnitude of the second-order effects of Spanish term structure shifts on returns were minimal in relation to the first-order effects of non-parallel shifts, in spite of significant interest rate movements. This conclusion confirms that the favorable results obtained by the portfolios immunized with three duration elements are basically due to the fact that they are immunized against not only parallel, but also linear and quadratic shifts in the term structure. Since all these kinds of shifts can be described by several multiple factor duration models, we must ask ourselves about the suitability of the polynomial model. The lack of independence of the risk factors is the main drawback of most duration models, including the one described here, and solving this problem without losing flexibility will be a challenging task for future research.