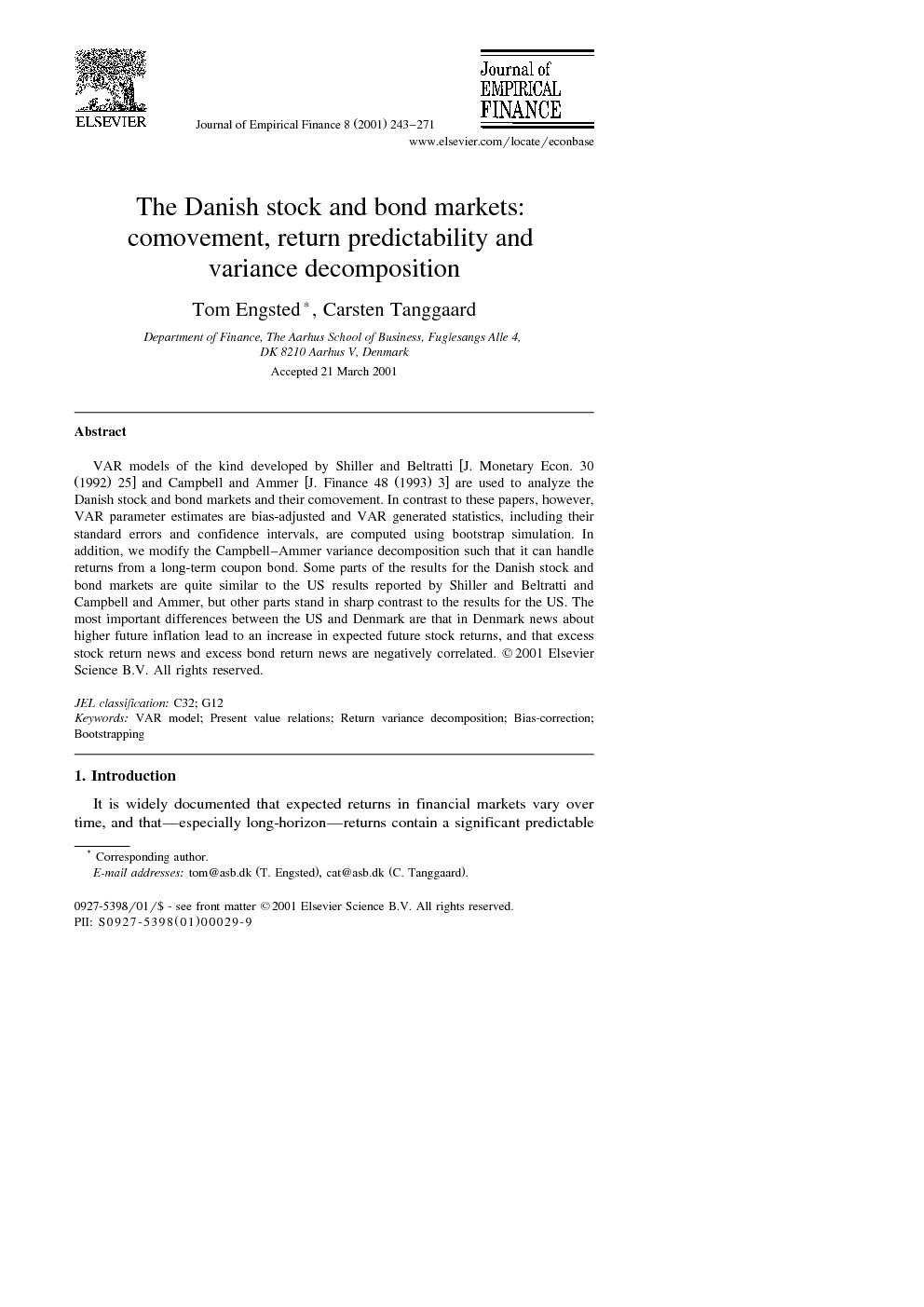 VAR models of the kind developed by Shiller and Beltratti [J. Monetary Econ. 30 (1992) 25] and Campbell and Ammer [J. Finance 48 (1993) 3] are used to analyze the Danish stock and bond markets and their comovement. In contrast to these papers, however, VAR parameter estimates are bias-adjusted and VAR generated statistics, including their standard errors and confidence intervals, are computed using bootstrap simulation. In addition, we modify the Campbell–Ammer variance decomposition such that it can handle returns from a long-term coupon bond. Some parts of the results for the Danish stock and bond markets are quite similar to the US results reported by Shiller and Beltratti and Campbell and Ammer, but other parts stand in sharp contrast to the results for the US. The most important differences between the US and Denmark are that in Denmark news about higher future inflation lead to an increase in expected future stock returns, and that excess stock return news and excess bond return news are negatively correlated.

It is widely documented that expected returns in financial markets vary over time, and that—especially long-horizon—returns contain a significant predictable component. The dividend–price ratio, in particular, has proven to be a good predictor of future stock returns, and the spread between long and short interest rates has shown clear predictive power for future bond returns (see Campbell et al., 1997, Chaps. 2, 7, and 10 for an up-to-date account on these findings). Most studies have treated the stock and bond markets in isolation. However, an interesting question is to what extent stock and bond prices/returns move together over time, and whether expected returns on stocks and bonds respond to the same underlying information. Barsky (1989) analyzes in a theoretical setting, based on a standard consumption-based asset pricing model, the effects of changes in risk and real economic productivity growth on the joint behaviour of stock and bond prices. He concludes that these prices may or may not move together, depending on the degree of risk-aversion of agents. Bekaert and Grenadier (2000) develop a general multi-factor arbitrage-free model for stock and bond pricing, and they also show that stock and bond returns may or may not move together, depending on the parameterization of the model. In an empirical setting, Shiller and Beltratti (1992) use vector autoregressions (VARs) to examine whether the positive correlation between stock and bond returns observed in long-term annual US and UK data (which is equivalent to a negative correlation between changes in stock prices and changes in long-term bond yields) can be explained in terms of simple rational expectations present value models, i.e. the expectations hypothesis for the term structure of interest rates and the dividend–ratio model for stock prices. They find that such simple models cannot explain the observed correlations. Campbell and Ammer (1993) undertake an analysis similar in spirit to the analysis in Shiller and Beltratti, but without imposing particular economic models on the data. Instead they develop, within a VAR framework, a variance decomposition for stock and bond returns, which enables them to decompose excess returns into news about future dividends, inflation, real interest rates, and excess returns. On post-war US data, they find that news about future excess stock returns account for most of the variation in excess stock returns, with news about future dividends and real interest rates being less important. On the other hand, the variance of excess bond returns is not mainly the result of news about future bond returns, but is instead mostly due to news about future inflation. These results help explain the quite low positive correlation of stock and bond returns observed in post-war US data. and In this paper, we analyze the joint behaviour of Danish stock and bond markets over the period 1922–1996. We apply the same basic VAR methodologies as those developed by Shiller and Beltratti (1992) and Campbell and Ammer (1993). However, we modify their methodologies in several ways. First, following Bekaert et al. (1997), we use bootstrap simulation to correct for the small-sample bias inherent in VAR parameter estimates, and we also compute standard errors and confidence intervals for the various statistics involved using bootstrap simulation. Second, instead of measuring comovement of stock and bond markets by comparing changes in stock prices and changes in bond yields, as in Shillar and Beltratti, we compare the movement in the dividend–price ratio with the movement in the long–short yield spread. Finally, we modify the Campbell–Ammer methodology such that it can handle returns from a long coupon bond. Their methodology is designed for zero-coupon bonds with a finite maturity, and cannot be used when bond returns are computed from the yields of long-term coupon bonds, which will often be the case since in many countries (including Denmark) zero-coupon yields on long bonds do not exist many years back. The main results from the empirical analysis can be summarized as follows. First, 1-year excess stock and bond returns are positively correlated, but simple present value models cannot explain this positive correlation. Second, over the whole sample period 1922–1996 and the smaller period 1922–1982, most of the variation in excess stock returns is due to news about future dividends. However, for the post war period 1947–1996, news about future excess stock returns is the dominating force behind stock return movements. This points to a structural break during the post war period, a break that may possibly be due to the opening of the Danish capital markets to foreigners in the beginning of the 1980s. On the other hand, a quite robust finding across all sub-periods is that news about future long-term inflation is the primary cause behind movements in excess bond returns. Third, increases in long-term expected inflation are either no news or bad news for the stock market in the short run but good news for the stock market in the long run. By contrast, news about higher future inflation is bad news for the bond market in both the short and long run. As a consequence, news about future stock returns and news about future bond returns are negatively correlated. Some parts of these results are quite similar to the US results reported by Shiller and Beltratti (1992) and Campbell and Ammer (1993), but other parts stand in sharp contrast to the US results. The rest of the paper is organized as follows. In Section 2, we present the basic stock and bond market relationships that will form the basis for the subsequent VAR analyses. Section 3 describes the VAR methodology, including the bootstrap simulation procedure. Section 4 reports the empirical results based on the present value models and variance decompositions. Finally, Section 5 contains some concluding remarks.

In this paper, we have analyzed the comovement of Danish stock and bond markets using long-term annual data covering the period 1922–1996. Based on various VAR models where, in accordance with the suggestions in Bekaert et al. (1997) and Kilian (1998), VAR parameter estimates have been adjusted for small-sample bias and standard errors and confidence intervals are generated using bootstrap simulation, we have the following main findings. First, simple rational expectations present value models cannot explain the positive correlation between stock and bond returns that we observe in the data. Second, inflation news accounts for most of the variation in bond returns. Third, dividend news accounts for most of the variation in stock returns, although there is some indication of a structural change such that in recent years news about future stock returns accounts for the bulk of stock market volatility. Fourth, inflation news affects expectations of future stock and bond returns differently in the long run. Finally, stock return news and bond return news are negatively correlated, despite the fact that actual 1-year stock and bond returns are positively correlated. Some of these results are quite similar to what Shiller and Beltratti (1992) and Campbell and Ammer (1993) have documented for the US and the UK. There are also some of the results, however, that are quite different from the results reported in those papers. An interesting topic for future research is a more detailed analysis of the differences between Danish and other countries asset markets. Recently, researchers have shown a large interest in documenting cross-country similarities and differences in world stock markets, see, e.g. Jorion and Goetzmann (1999) and Campbell (1999). The present study, together with the analyses in Engsted et al. (2000), has added further pieces to this strand of literature.