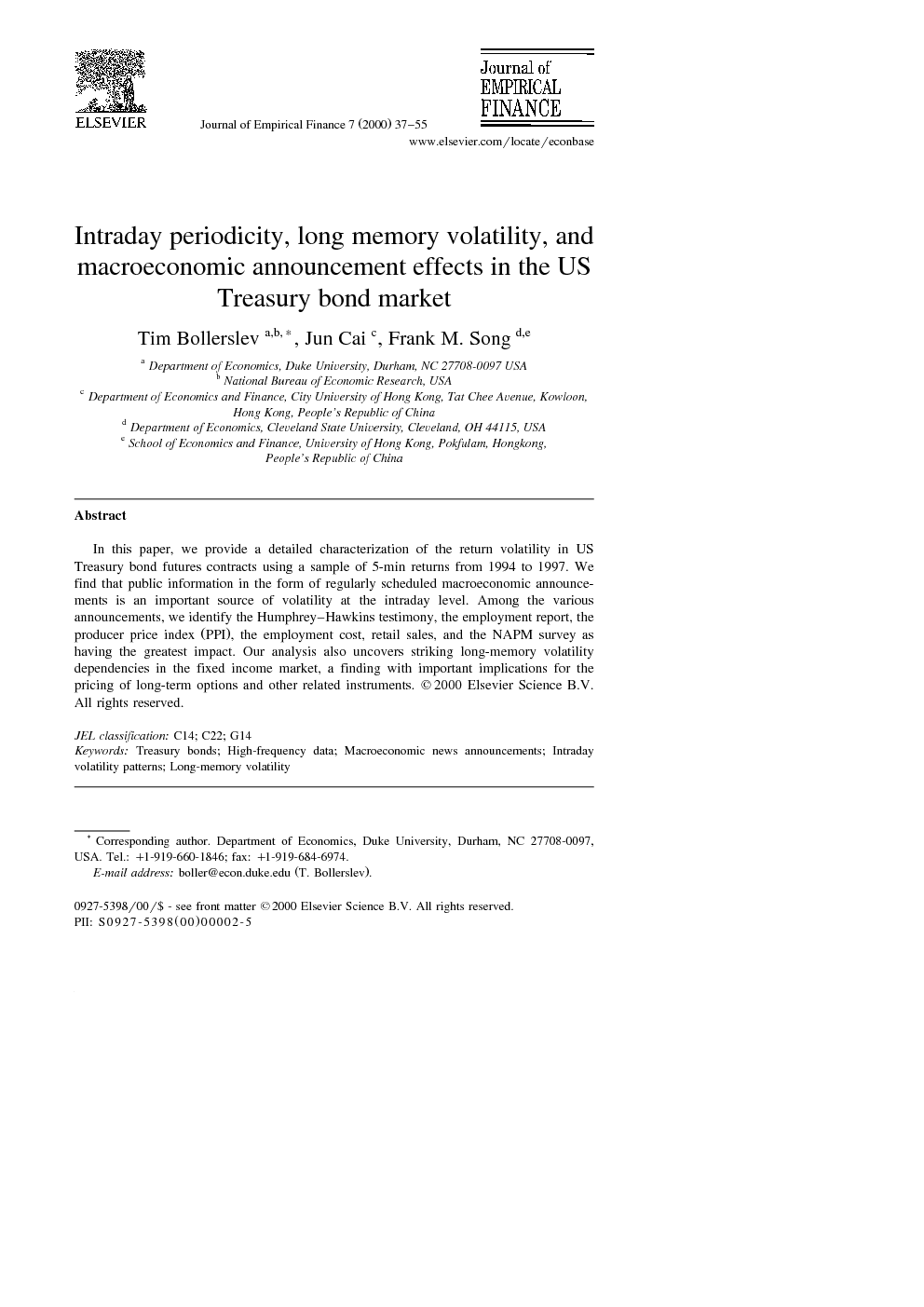 In this paper, we provide a detailed characterization of the return volatility in US Treasury bond futures contracts using a sample of 5-min returns from 1994 to 1997. We find that public information in the form of regularly scheduled macroeconomic announcements is an important source of volatility at the intraday level. Among the various announcements, we identify the Humphrey–Hawkins testimony, the employment report, the producer price index (PPI), the employment cost, retail sales, and the NAPM survey as having the greatest impact. Our analysis also uncovers striking long-memory volatility dependencies in the fixed income market, a finding with important implications for the pricing of long-term options and other related instruments.

The US Treasury bond market is one of the largest and most active financial markets in the world. Unlike the stock and corporate bond markets, most of the information of direct relevance for the Treasury bond market are likely related to macroeconomic news. There appears to be little, if any, asset-specific information concerning Treasury bonds. Consistent with this view, a number of prior studies have documented a significant bond market impact from numerous macroeconomic announcements.1 Meanwhile, the recent availability of high-frequency data has dramatically increased the power to identify and estimate such announcement effects. In particular, Ederington and Lee (1993) examine the impact of monthly economic announcements on 5-min Treasury bond futures returns and find that the return volatility is much higher between 0830 and 0835 Eastern Standard Time (EST) than during any other 5-min trading period. Similarly, Fleming and Remolona, 1997 and Fleming and Remolona, 1999 report significant announcement effects in the return volatility, bid–ask spread, and trading activity of the 5-year US Treasury note. In a closely related context, Balduzzi et al. (1999) study the impact of macroeconomic announcements on the price, trading volume, bid–ask spread, and volatility of both short- and long-term US interest rate instruments. Most of these earlier studies simply regress the absolute value of the change in log prices on announcement dummies, sometimes augmented with an additional set of dummy variables to control for intraday patterns in the price volatility. Although this approach has been quite successful in identifying the announcements with the greatest impact, it does not account for the complex volatility dynamics that exists at the low interdaily and high intradaily frequencies. However, the time-of-the-day patterns (intraday calendar effects), macroeconomic announcements (public information effects), and the well-documented interday volatility persistence (ARCH effects) all constitute an integral part of the overall volatility process, and should therefore be accounted for simultaneously, or distorted estimates for any one of the individual components may arise. Building on the methodology in Andersen and Bollerslev, 1997a, Andersen and Bollerslev, 1997b and Andersen and Bollerslev, 1998, this paper offers a comprehensive study of the intraday patterns in the volatility for the US Treasury bond futures contracts that explicitly incorporate all the different volatility components in a coherent framework. Our analysis is based on a 4-year sample of 5-min returns from 1994 to 1997. Our main findings are as follows. First, there exist two spikes in the intraday volatility at 0830 and 1000 EST, respectively, corresponding to the regularly scheduled macroeconomic announcements in the US at these times. There is also an overall U-shaped pattern in the volatility across the day, although this pattern is much less pronounced than what is typically observed in equity markets. This intraday periodicity in the volatility, in turn, gives rise to a strong daily pattern in the autocorrelation of the absolute 5-min returns. Appropriately filtering out this periodic pattern, a rapid initial decay in the autocorrelations, followed by an extremely slow rate of decay thereafter, becomes evident. This shape indicates the presence of long-memory volatility dependencies in the Treasury bond market, which we also confirm by more formal testing procedures. Our finding of long-memory, or fractionally integrated volatility dependencies in the fixed income market complements previous results related to the foreign exchange and equity markets in Dacorogna et al. (1993), Ding et al. (1993), and Baillie et al. (1996), among others. Moreover, the fact that the long-memory feature manifests itself in the high-frequency data over a relatively short time span suggests that it is an inherent property of the return process. Second, we find that the largest returns in the US Treasury bond market are readily linked to the release of macroeconomic announcements. At both the daily and intraday frequencies, the announcement effects have the highest marginal explanatory power for the volatility among the three components (calendar, announcement, and ARCH effects). Most notably, the release of the Humphrey–Hawkins testimony and the employment report generates an average instantaneous jump in volatility of about 2100% and 1400%, respectively, along with a 93% and 75% increase in the cumulative absolute return for trading days that contain these two particular announcements. Moreover, the 15 most important regularly scheduled macroeconomic news reports all result in an increase in the daily cumulative absolute returns in excess of 10%. These effects are much larger than what have previously been documented for the foreign exchange and Japanese equity markets by Andersen and Bollerslev (1998) and Andersen et al. (2000a), respectively.2 Moreover, we confirm the robustness of these findings by splitting the sample into two separate sub-periods. Using the first 2 years for model estimation and the second 2-year period for out-of-sample forecast evaluation, the results are virtually unaltered. The remainder of the paper is organized as follows. Section 2 describes the data, summarizes the intraday return and volatility patterns, and estimates the intraday periodic and long-memory volatility components. Section 3 examines the implications of the major macroeconomic announcements, while Section 4 assesses the overall importance of the different volatility components at the intraday and interdaily level. Section 5 concludes the paper.

This paper provides a detailed characterization of US Treasury bond futures return volatility based on a 4-year sample of 5-min returns from 1994 to 1997. Consistent with previous findings, we find two spikes in the intraday absolute 5-min return, corresponding to the regularly scheduled US macroeconomic announcements at 0830 and 1000 EST, respectively. The volatilities at the open and close are also higher than in the middle of the day, although the corresponding U-shape is less pronounced than the typical pattern in equity markets. The strong intraday periodicity leads to equally strong patterns in the autocorrelation of the absolute returns, which in turn overshadows the longer-run dynamic dependencies. However, when explicitly adjusting for the repetitive pattern, a striking long-memory hyperbolic rate of decay becomes evident in the autocorrelations. Our analysis also details the impact of regularly released US macroeconomic announcements. Among the 27 different announcements that we investigate, the Humphrey–Hawkins testimony and the employment report are by far the most important, followed by the PPI, the employment cost, retail sales, and the NAPM survey. Although this list corresponds fairly closely to previous results in the literature, our approach provides new evidence for the incremental explanatory power afforded by each of the announcements, both at the daily and intradaily levels. In contrast to prior results for the foreign exchange and equity markets, we find that the macroeconomic announcement effects constitute an important source of bond market volatility, even at the daily horizon.