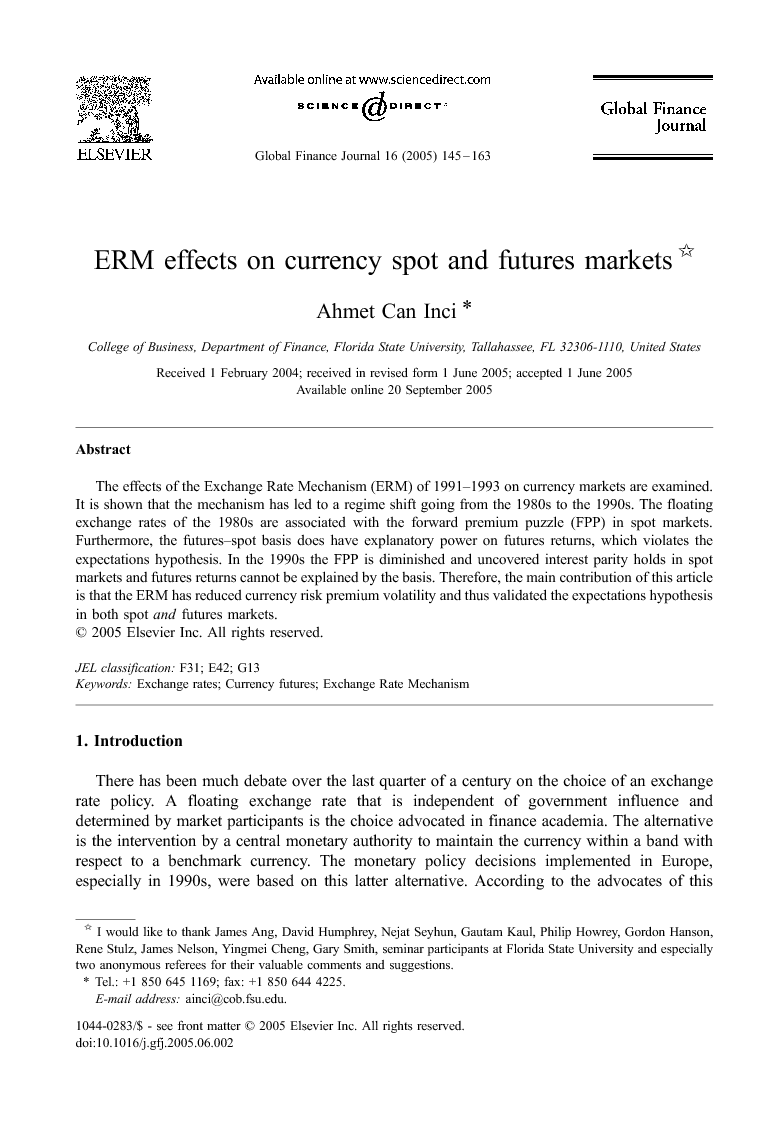 The effects of the Exchange Rate Mechanism (ERM) of 1991–1993 on currency markets are examined. It is shown that the mechanism has led to a regime shift going from the 1980s to the 1990s. The floating exchange rates of the 1980s are associated with the forward premium puzzle (FPP) in spot markets. Furthermore, the futures–spot basis does have explanatory power on futures returns, which violates the expectations hypothesis. In the 1990s the FPP is diminished and uncovered interest parity holds in spot markets and futures returns cannot be explained by the basis. Therefore, the main contribution of this article is that the ERM has reduced currency risk premium volatility and thus validated the expectations hypothesis in both spot and futures markets.

There has been much debate over the last quarter of a century on the choice of an exchange rate policy. A floating exchange rate that is independent of government influence and determined by market participants is the choice advocated in finance academia. The alternative is the intervention by a central monetary authority to maintain the currency within a band with respect to a benchmark currency. The monetary policy decisions implemented in Europe, especially in 1990s, were based on this latter alternative. According to the advocates of this system, an unconditional peg is not the right choice. It would lower inflation expectations but also force the government to a painful defense of the parity in the presence of sizable macroeconomic disturbances. On the other hand, a float may not be appropriate either; it would not provide any monetary or fiscal discipline. The middle approach — realignment rules in a fixed exchange rate regime — provides the logical foundation of an Exchange Rate Mechanism (ERM). A fixed exchange rate regime with implicit escape clauses which allow for the possibility of realignments in the presence of large, observable, and verifiable shocks is supposed to work best. The political goal of exchange rate stability in Europe has been reinforced by two perceptions about the economy. First, if the movement to a common market with the abolition of tariffs, subsidies, and other barriers to trade is not complemented with an orderly development of a joint monetary system, some national policy makers may be tempted to use exchange rate policy in order to gain a competitive advantage. This form of competition has been regarded as inconsistent with free and fair trade. Second, there is the general skepticism about unregulated financial markets. A regime of flexible exchange rates is subject to severe and persistent misalignments of international relative prices and excess volatility of exchange rates. Speculative bubbles may arise while trade and investment may be deterred. This paper does not aim to answer whether a flexible or a fixed exchange rate regime is superior. The optimal currency regime depends on many factors (Holmes, 2002 and Miller & Zhang, 1996). The goal in this research is to examine the effects of European exchange rate policies on financial markets, specifically, the currency and the currency futures markets. Previous studies by Ayuso and Restoy (1996), Ayuso and Perez-Jurado (1997), Perasan and Robinson (1992), and Sercu, Vandebroek, and Wu (2003) focus on the ERM period of the early 1990s. This study provides comparative analyses between the 1980s and the 1990s, including and excluding the ERM period. The study also examines exchange rate policies and their effectiveness throughout the 1990s, beyond the specific ERM period along the lines of Bartolini and Prati (1999). Finally, while Campa & Chang, 1996 and Campa & Chang, 1998 look at options markets, this paper focuses on futures markets. Therefore, currency futures markets as well as spot markets are investigated. European spot returns are examined using the futures–spot basis in different time periods. Futures returns are examined in a similar fashion. The robustness of European currency spot and futures results is determined with the Japanese yen and the Canadian dollar serving as non-European currencies. This paper, therefore, concentrates on the implications of the exchange rate regime on markets, not on the reverse direction of causation. Exchange rates have been freely floating since 1973. Previous research has documented that the expectations hypothesis or uncovered interest parity does not hold in spot markets. Moreover, returns in currency futures should not be explained by the futures spot rate difference, but they are. These stylized facts on currency dynamics should be similar in both the 1980s and the 1990s. However, the study finds this is not the case for European currencies. We do see differences in the 1990s. During this latter decade, the move towards the European Union was in full swing. Potential members were joining monetary unions and participating in the ERM. Exchange rates were heavily influenced by governments' efforts to comply with the requirements of joining the union. We see the implications of such policies on currency dynamics and currency markets in the 1990s. The expectations hypothesis is validated and anomalies disappear both in spot and futures markets. This is mainly due to the tight ERM period of 1991 through 1993. Although there are many papers on the expectations hypothesis, and a number of them look at the ERM from different perspectives (focusing only on the ERM period, or exploring cross-currency dynamics among European currencies), the main contribution of this study is the finding that the ERM has helped currencies satisfy the expectations hypothesis both in the spot markets and the futures markets. The paper is organized as follows. Section 2 provides a brief summary of European exchange rate policies since the Second World War. Section 3 discusses the general theory on spot and futures currency movements. Section 4 describes the data construction and the estimation methodology. Results and discussion are in Section 5. Conclusion follows.

This study examines the effects of the Exchange Rate Mechanism on currency markets. The mechanism seems to have created a regime shift going from the 1980s to the 1990s. The relatively free floating exchange rates of the 1980s are associated with the forward premium puzzle in spot markets. Furthermore, the futures–spot basis does have explanatory power on futures returns. Therefore, the expectations hypothesis does not hold. On the other hand, the ERM implemented in early 1990s has changed European currency dynamics markedly. The forward premium puzzle is diminished in spot markets, and futures returns cannot be explained by the basis in this decade. Currency dynamics satisfy the expectations hypothesis in both spot and futures markets under the tight rules of the ERM in the 1990s. One way to interpret the results is that the ERM has validated the expectations hypothesis by reducing the volatility of risk premiums associated with currencies and by eliminating the negative correlation between risk premiums and expected returns. The robustness tests of the cross-currency dynamics between the British pound and the German mark produce similar conclusions. Furthermore, there is no difference in the dynamics of the Japanese yen and the Canadian dollar between the 1980s and the 1990s. This further strengthens the argument that it was the ERM and similar policies that were behind the regime shift in European currencies. The investigation of the impact of the ERM on the term structure of interest rates (along the lines of Bernhardsen, 2000), and on financial markets are possible future avenues of research. Results of this study, especially of the German mark, can also provide a guide on the relationship between the euro and the U.S. dollar.