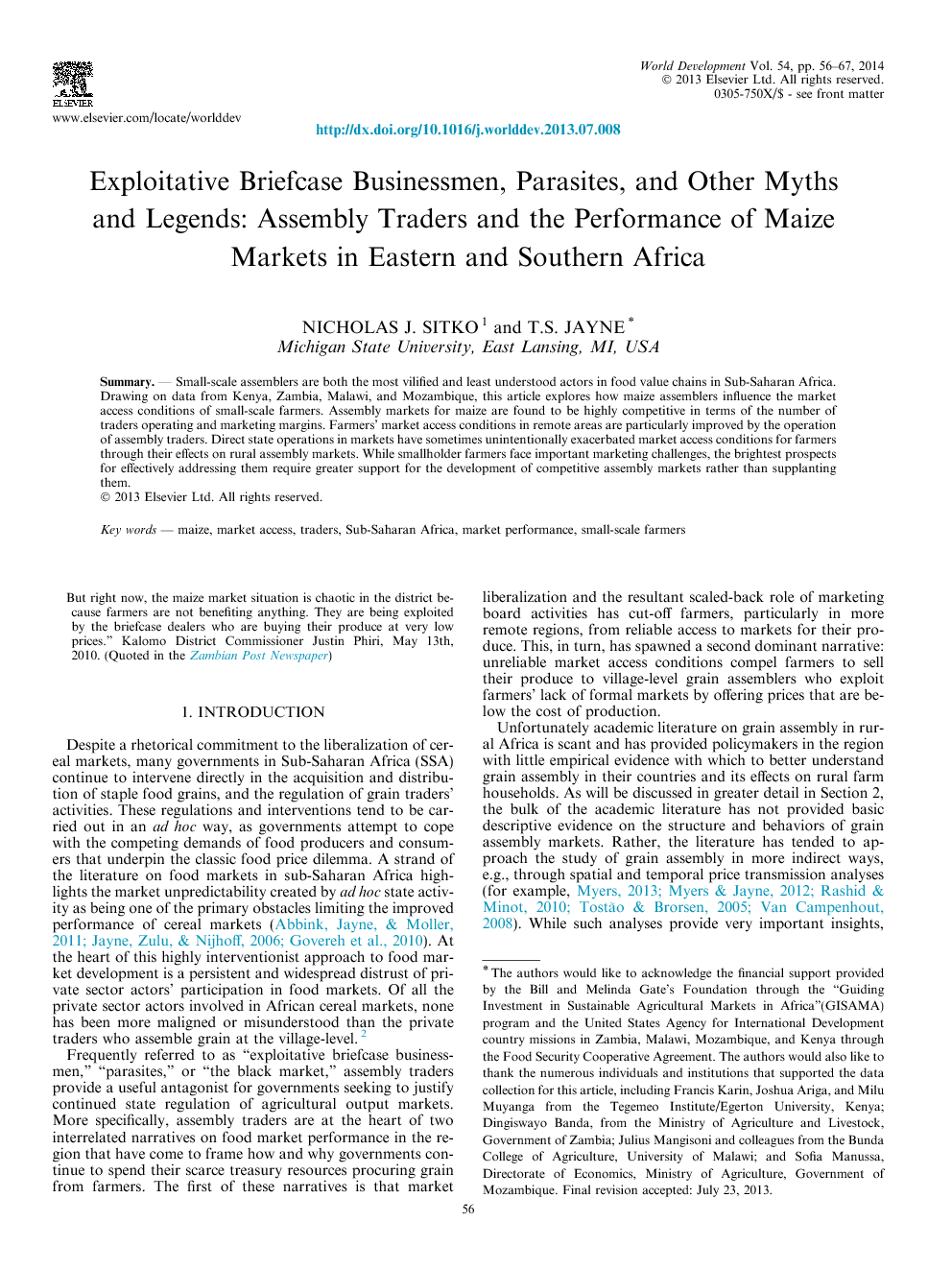 Small-scale assemblers are both the most vilified and least understood actors in food value chains in Sub-Saharan Africa. Drawing on data from Kenya, Zambia, Malawi, and Mozambique, this article explores how maize assemblers influence the market access conditions of small-scale farmers. Assembly markets for maize are found to be highly competitive in terms of the number of traders operating and marketing margins. Farmers’ market access conditions in remote areas are particularly improved by the operation of assembly traders. Direct state operations in markets have sometimes unintentionally exacerbated market access conditions for farmers through their effects on rural assembly markets. While smallholder farmers face important marketing challenges, the brightest prospects for effectively addressing them require greater support for the development of competitive assembly markets rather than supplanting them.

This article has presented an alternative view on the grain assembly sector in rural Africa. Contrary to the widely shared vision of Africa smallholders as cut-off from output markets for their produce or held captive by predatory and exploitative traders, we have presented evidence from four countries of east and southern Africa indicating that village-level grain assembly is in fact highly competitive, both in terms of the numbers of buyers in villages and the low price margins they operate on. The development of the assembly trading sector is of particular importance to the millions of smallholders in the region who do not enjoy the economies of scale needed to directly link to large commercial buyers for their produce. Given the clear benefits derived by smallholders from the assembly trading sector, in terms of local market access and lowered search and transport costs, continued state interventions that undermine this stage in the value chain are worrying. Direct state marketing operations aimed at “improving farmers’ access to markets” may be particularly misplaced. Indeed, many of the policies pursued by governments to improve farmers’ access to markets directly undermine the performance of the assembly trading sector, and therefore limit farmers’ available market channels. Rather than thinking in terms of creating institutions to overcome perceived issues of market access and private sector exploitation, donors and governments need to think about how to help farmers to better engage with existing market channels and how to facilitate greater competition within the trading sector. This boils down to a combination of investments in market skills training for farmers, public support to foster greater trust in the private marketing system, such as through consistent testing and certification of traders’ measurement devices, support for the broader use of grades and standards, public investment in infrastructure to better link rural villages to urban markets, and investments to improve farm productivity, which will allow more farmers to engage with markets in the first place. Above all, governments may serve farmers’ interests by ensuring that the policy environment is stable and predictable enough to encourage private sector investment in all the various stages of the grain value chains (Abbink et al., 2011 and Jayne, 2012). Designing and adhering to a set of rules to govern how, when, and to what extent governments will intervene in grain markets will encourage greater investment in the agricultural sector. By so doing governments can capitalize on the gains that have been made since the initiation of market reforms in ways that are directly beneficial to small-scale farmers.