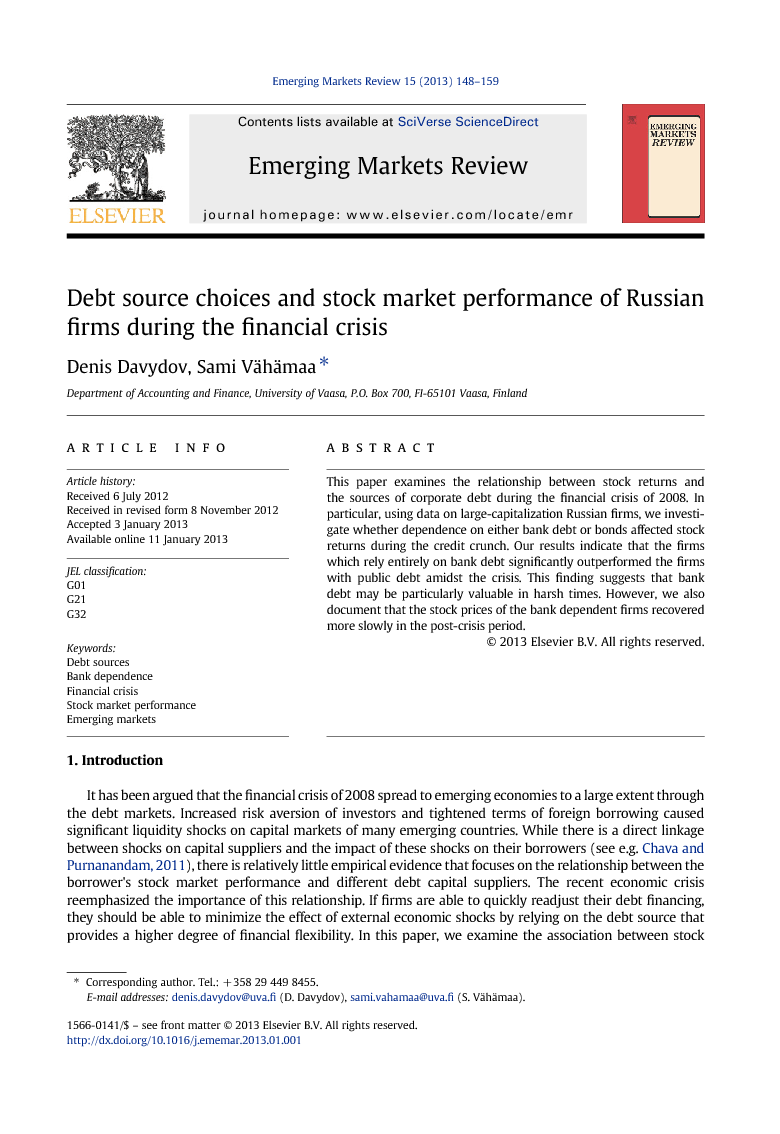 This paper examines the relationship between stock returns and the sources of corporate debt during the financial crisis of 2008. In particular, using data on large-capitalization Russian firms, we investigate whether dependence on either bank debt or bonds affected stock returns during the credit crunch. Our results indicate that the firms which rely entirely on bank debt significantly outperformed the firms with public debt amidst the crisis. This finding suggests that bank debt may be particularly valuable in harsh times. However, we also document that the stock prices of the bank dependent firms recovered more slowly in the post-crisis period.

In this paper, we examine the association between stock returns and the sources of corporate debt capital during the financial crisis of 2008. In particular, using data on large publicly traded Russian firms, we investigate whether the choice between bank debt and public debt in form of bonds affected stock returns during the credit crunch. It is widely acknowledged that there are both costs and benefits associated with reliance on either bank-based or market-based debt capital. The purpose of this paper is to empirically address the implications of the firm's debt source choices on stock market performance amidst the financial turmoil of 2008. The empirical findings reported in this paper indicate that debt source choices may affect the firm's stock market performance. Specifically, we document that firms which rely entirely on bank debt significantly outperformed the firms with public debt amidst the financial crisis. These results are broadly consistent with the prior evidence on the advantages of bank debt (see e.g. Cantillo and Wright, 2000, Haan and Hinloopen, 2003 and Shirasu and Xu, 2007). Moreover, our findings from the emerging Russian stock markets are also consistent with the recent evidence from developed markets (Allen and Paligorova, 2011), and thereby provide further support for the view that bank dependence may be particularly valuable during periods of market stress. A potential explanation for the positive effects of bank-based debt financing may be related to banks' ability to provide credit lines to their borrowers. Consistent with this view, we document that the amount of commercial loans issued by Russian banks rose significantly from 2008 onwards. We also document that stock prices of bank dependent firms recovered more slowly in the immediate aftermath of the crisis. This finding is consistent with the argument that bank-based debt capital may instigate more conservative investment policies due to greater risk-aversion of banks (see e.g. Arikawa, 2008 and Weinstein and Yafeh, 1998). Finally, we find no relationship between the firm's debt sources and stock returns in the post-crisis phase.