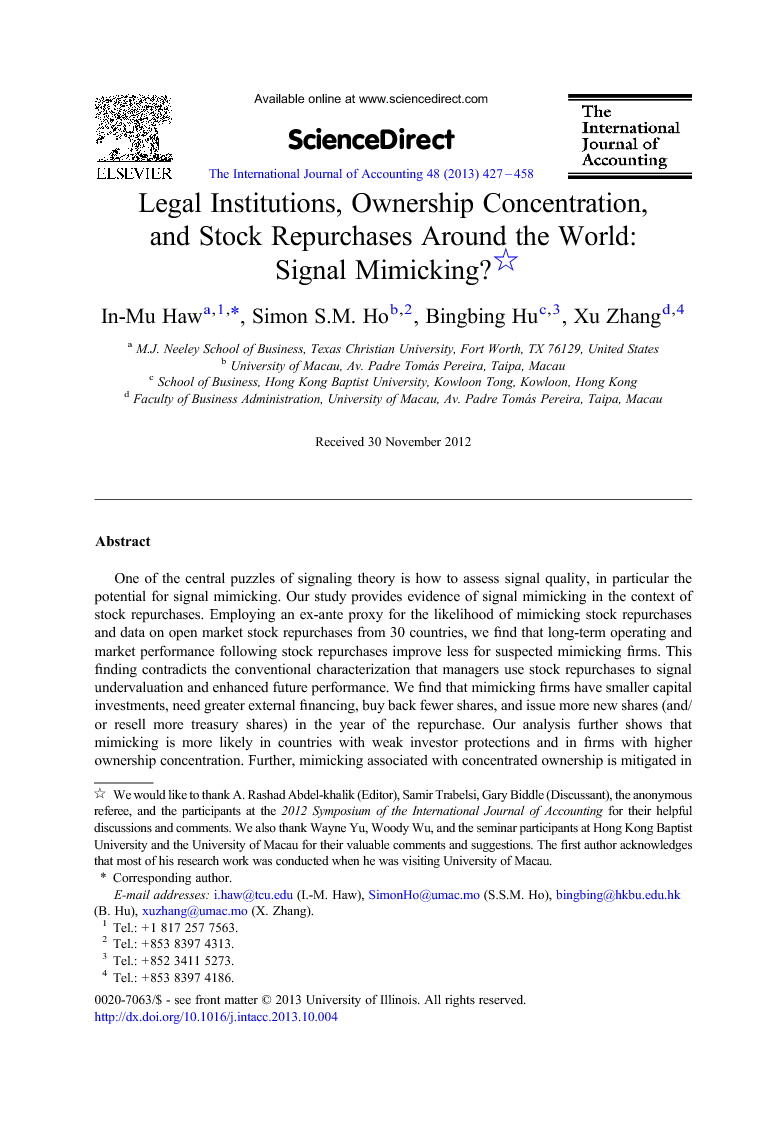 One of the central puzzles of signaling theory is how to assess signal quality, in particular the potential for signal mimicking. Our study provides evidence of signal mimicking in the context of stock repurchases. Employing an ex-ante proxy for the likelihood of mimicking stock repurchases and data on open market stock repurchases from 30 countries, we find that long-term operating and market performance following stock repurchases improve less for suspected mimicking firms. This finding contradicts the conventional characterization that managers use stock repurchases to signal undervaluation and enhanced future performance. We find that mimicking firms have smaller capital investments, need greater external financing, buy back fewer shares, and issue more new shares (and/or resell more treasury shares) in the year of the repurchase. Our analysis further shows that mimicking is more likely in countries with weak investor protections and in firms with higher ownership concentration. Further, mimicking associated with concentrated ownership is mitigated in countries with stronger investor protections and by the adoption of International Financial Reporting Standards (IFRS). Altogether, our findings provide evidence of signal mimicking in stock repurchases in international data that is influenced by market, ownership, legal, and financial reporting characteristics of countries.

Previous studies identify the intent to signal undervaluation and/or distribute free cash flows as major motives for undertaking stock repurchases. They generally find that long-term operating and market performance improve following stock repurchases. However, previous empirical and theoretical findings suggest that other motives can arise, which encourage false signaling or mimicking. In augmenting this interpretation, our study has two aims. First, by using a composite measure to proxy for the likelihood of mimicking repurchases, this study identifies a subset of repurchasing firms that are likely to use stock repurchases as a tool to mislead the markets for the private benefits of corporate insiders. Second, we use international data to investigate the respective roles of country-level investor protections, ownership structures, and the adoption of IFRS in mitigating signal mimicking and thus improving signal quality in the context of stock repurchases. We construct a composite measure of the likelihood of mimicking repurchases, based on the ex-ante characteristics of repurchasing firms. Using this measure on a sample of repurchasing firms across 30 countries outside the U.S. between 1998 and 2006, we find that both the levels of, and changes in, operating and market performance decrease monotonically with the likelihood of mimicking repurchases during the three years following actual stock repurchases. Instead of signaling motives of undervaluation and free cash distribution, suspected mimicking firms exhibit lower capital investment and greater need for external financing. They repurchase fewer shares, and issue more new shares (or resell more treasury shares) in the year of the repurchase. These phenomena indicate a lower cost associated with mimicking versus genuine repurchases. Considered together, these findings provide evidence that firms engage in mimicking repurchases internationally. Further findings reveal that mimicking is more likely in countries with weak investor protections and in firms with highly concentrated insider ownership. We also find that stronger legal institutions and the adoption of IFRS enhance the signaling credibility of stock repurchases by curbing mimicking behavior by corporate insiders. Consistent with the Spence (2002) argument that low-quality product owners have an incentive to imitate the signals of high-quality products, our study provides empirical evidence of it in the context of the capital markets and further evidence on the factors that can mitigate mimicking behavior. Given the limited international research to date on stock repurchases, our study highlights the importance of a country's legal institutions, firm ownership structures, and the adoption of IFRS in enhancing signal quality in the context of stock repurchase programs. Our empirical findings are subject to two caveats. First, our proxy for mimicking repurchase (Mimic) is subject to remaining measurement error. Second, we use closely held blocks of shareholdings to proxy for corporate insider ownership. One weakness of this measure is that it includes all block holdings, some of which may be unrelated to controlling shareholders, so this measure may not accurately capture the degree of control rights concentration.