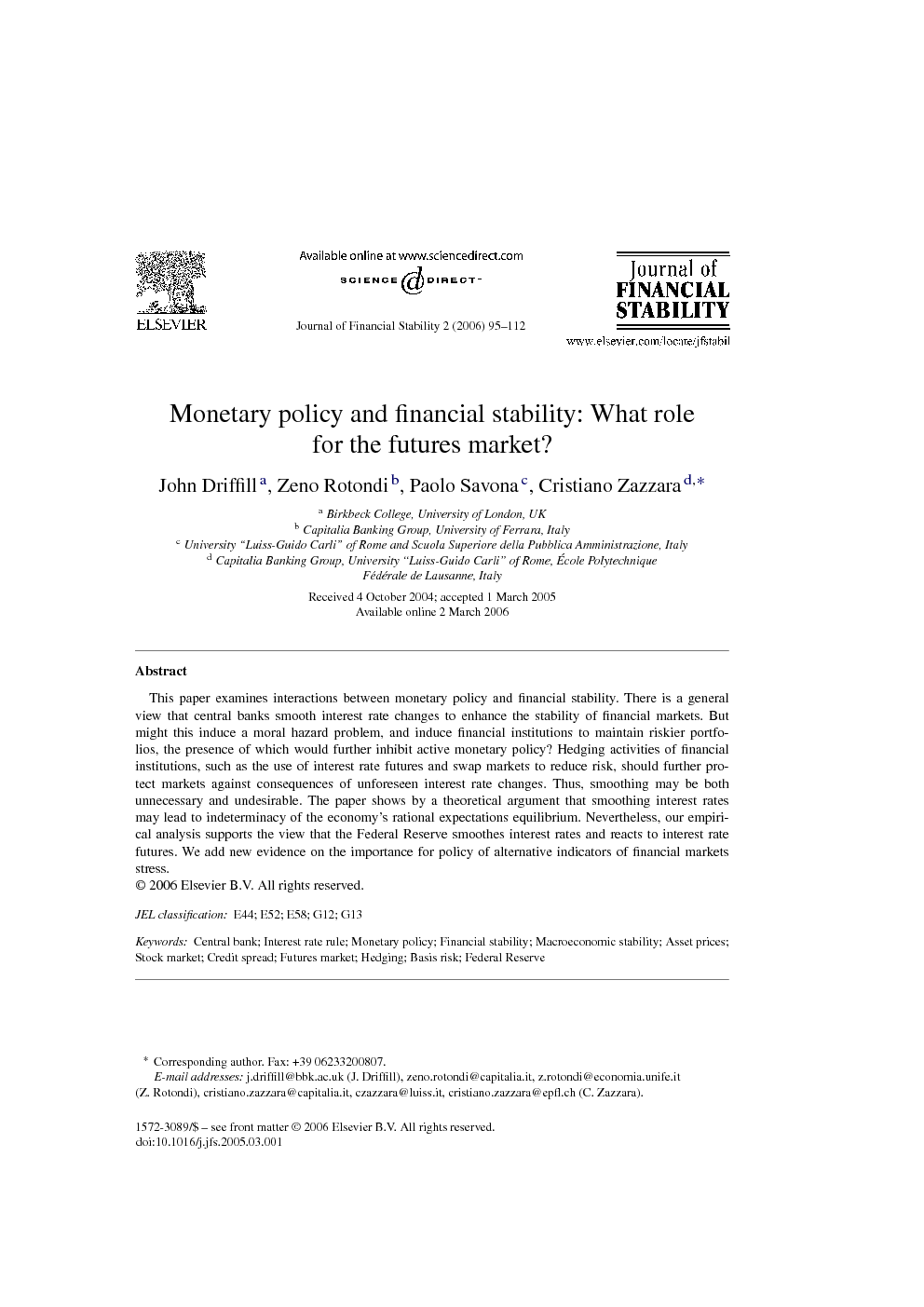 This paper examines interactions between monetary policy and financial stability. There is a general view that central banks smooth interest rate changes to enhance the stability of financial markets. But might this induce a moral hazard problem, and induce financial institutions to maintain riskier portfolios, the presence of which would further inhibit active monetary policy? Hedging activities of financial institutions, such as the use of interest rate futures and swap markets to reduce risk, should further protect markets against consequences of unforeseen interest rate changes. Thus, smoothing may be both unnecessary and undesirable. The paper shows by a theoretical argument that smoothing interest rates may lead to indeterminacy of the economy's rational expectations equilibrium. Nevertheless, our empirical analysis supports the view that the Federal Reserve smoothes interest rates and reacts to interest rate futures. We add new evidence on the importance for policy of alternative indicators of financial markets stress.

Central banks in the developed world have, in the last 10 or 15 years, overwhelmingly switched to a policy of setting short-term interest rates with the primary aim of targeting inflation. Other objectives allegedly remain, but occupy a lower place on the agenda. Among them is the objective of maintaining financial stability, the responsibility for which has long been a role of central banks. The survival of this role has been cited in support of the empirical finding that interest rates seem to move gradually in response to changes in macroeconomic conditions (notably the output gap and inflation). It is argued that by making interest rate changes smaller and more predictable, central banks reduce the volatility of the profits of commercial banks and reduce the risk of bank insolvencies and insolvencies among the businesses who borrow from them.1 With the passage of time, and the growth in the sophistication of financial markets and in the range of financial instruments available for trading risks, banks like other players in these markets have become increasingly well able to hedge against the risks that variable short-term interest rates pose for their profits and balance sheets. They have turned to markets in interest rate futures and more recently to interest rate swaps in order to hedge their positions. These activities should in principle have reduced banks’ exposure to such risks. Nevertheless, the possibilities for hedging are less than perfect. Unanticipated changes in interest rates have residual effects on bank profits, and central banks may continue to moderate their interest rate changes for reasons of stability of financial markets. The purpose of this paper is to explore the interaction of monetary policy and financial stability, and in particular to examine the role played by financial institutions’ use of futures and other derivatives markets to hedge risks. Research on the subject of monetary policy and financial stability has mostly focused its attention on central banks’ alleged practice of smoothing interest rate movements (see Goodfriend, 1987, and more recently Smith and van Egteren, 2004). It is argued that lower volatility should reduce bank insolvencies caused by unanticipated sharp increases in short-term interest rates. Widespread use of hedging by banks should further reduce their vulnerability to interest rate fluctuations, and enable central banks to change interest rates with less caution. Nevertheless, the residual risk – basis risk and other risks that remain after imperfect hedging opportunities have been exploited – may act as a moderate restraint on monetary policy. It is possible that the macroeconomic stability obtained as a result of aggressive use of monetary policy brings its own dangers. It may induce a form of moral hazard. Commercial banks and other financial institutions may respond to a stable macroeconomic climate by taking on riskier portfolios of loans and deposits than are consistent with financial stability. Markets may act on what they believe to be an implicit guarantee of public policy that will maintain stability and possibly bail them out of difficulties. The Federal Reserve (see, for instance, Poole, 2004) is alive to these dangers and keen to avert them by making markets aware that risks of instability exist, and that the Federal Reserve would not be able to bail out large players. Our study makes two contributions. First, from a theoretical standpoint, we analyze the inclusion of futures prices, and the associated basis risk, in the central bank's reaction function, extending the analysis of determinacy of equilibrium conducted by Bullard and Schaling (2002). We show the existence of a trade-off between macroeconomic and financial stability. We argue that this trade-off calls for caution, but does not necessarily imply that the central bank cannot smooth interest rates to reduce basis risk. Second, from an empirical perspective, we assess the importance for monetary policy of the response to interest rate futures, focusing on the behaviour of the Fed. Following the same econometric approach as Clarida et al. (2000), we estimate an augmented interest rate rule with the stock index, the credit spread and the eurodollar futures rate in addition to inflation and output gap. Our empirical findings support the importance of futures market movements, and in particular of the stabilization of basis risk for the Federal Reserve's monetary policy. This is an interesting result since the extant literature has mainly stressed the importance of the inclusion of stock market index (Sack and Rigobon, 2003; Chadha et al., 2004; Rotondi and Vaciago, 2005) and the credit spread (Castelnuovo, 2003 and Gerlach-Kristen, 2004) in the Fed’ s interest rate rule. The paper is organized as follows. Section 2 defines the concept of financial stability from the perspective of central banks. Section 3 examines the role of interest rate futures markets, and the use of other derivatives, as part of banks’ policies for hedging risk. It considers implications for financial stability. Section 4 presents a theoretical analysis of the explicit inclusion of futures prices in the central bank's reaction function within a New Keynesian framework. Section 5 measures the response to future prices of the Fed's monetary policy, while Section 6 concludes.

This paper contributes to the literature in several directions. Using a theoretical argument, the paper shows how stabilizing futures market movements may lead to indeterminacy of the rational expectations equilibrium, extending an analysis of Bullard and Schaling (2002). The empirical analysis allows for a Federal Reserve reaction to futures prices in the Taylor Rule. Many variants of Taylor’s original specification have been estimated. A common finding is that the lagged interest rate enters estimated policy rules with overwhelming significance. This is generally interpreted as central banks’ smoothing of interest rates to promote financial stability. More recently empirical evidence has emerged that monetary policy reacts to stock market and credit spread movements. This has also been interpreted as an attempt to promote financial stability. We add new evidence that interest rates react to futures market movements and provide a broad assessment of the relative importance of alternative indicators of financial markets stress. Our results show that the component in the interest rate rule related to futures prices has the same degree of importance of the output gap component, while it appears to dominate the stock market component. However, the empirical evidence advanced in the paper needs to be read with some caution. The results are based on single equation model not a structural model. The variables with which the interest rate rule has been augmented are all expectational variables, and may merely show up the financial markets’ anticipations of events, which later on cause changes in the Federal Reserve’s policy rule. More work is needed to distinguish among the several possible causal connections among these variables. In both the theoretical and empirical analyses we argue that the futures market, and in particular the basis risk implied by the hedging strategies of financial institutions, is a key component of monetary policy aimed at achieving financial stability among other objectives. Surprisingly, the literature on monetary policy and financial stability has devoted little attention to the role played by futures markets, focusing mainly on the issue of stabilizing short-term interest rate fluctuations or reacting to other indicators of financial markets stress. From this perspective our paper may represent an effort towards a broader comprehension of the nexus between monetary policy and financial stability. A graphical decomposition of the interest rate targets shows that, starting from the late 1980s, variables related to macroeconomic stability have decreased in prominence, whilst the financial stability variables have gradually come to the fore. This may have gone hand in hand with a shift in the central bank’s objective function towards financial stability motives, due to both a low inflation environment and the globalization of financial markets. If monetary policy should pay greater attention to the build-up of financial imbalances in a globalized world, the symptoms of financial instability should even be more relevant under moderate inflation dynamics. In fact, during prolonged periods of price stability, build-up of debt and overinvestment by firms are more likely to occur, as under this circumstance it is more likely that excess demand pressures show up first in credit aggregates and asset prices, rather than in real market prices. The central bank’s objective function in a globalized world clearly deserves further investigation, since better understanding of it could help in the formulation of arrangements and policy responses to promote both monetary and financial stability.As shown by the present empirical analysis, the standard textbook treatment of central bank’s objective function, mostly based on price and output stabilization, may be a too restrictive description of central banking in practice.