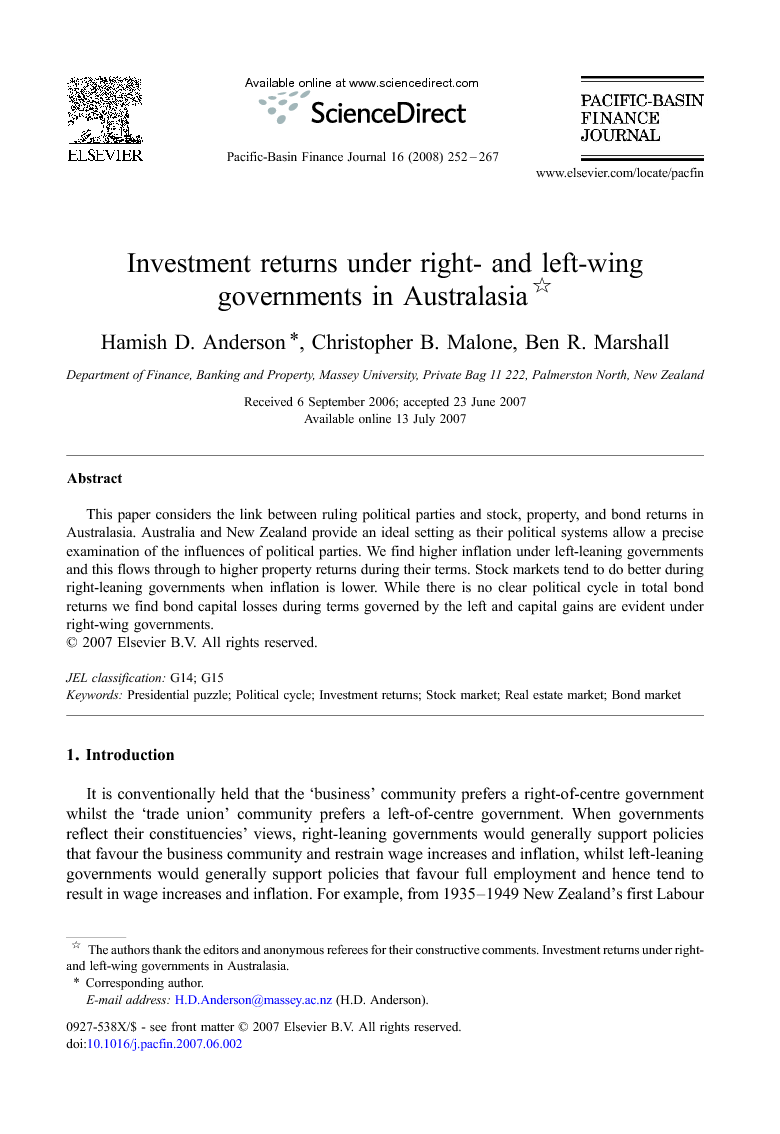 This paper considers the link between ruling political parties and stock, property, and bond returns in Australasia. Australia and New Zealand provide an ideal setting as their political systems allow a precise examination of the influences of political parties. We find higher inflation under left-leaning governments and this flows through to higher property returns during their terms. Stock markets tend to do better during right-leaning governments when inflation is lower. While there is no clear political cycle in total bond returns we find bond capital losses during terms governed by the left and capital gains are evident under right-wing governments.

It is conventionally held that the ‘business’ community prefers a right-of-centre government whilst the ‘trade union’ community prefers a left-of-centre government. When governments reflect their constituencies' views, right-leaning governments would generally support policies that favour the business community and restrain wage increases and inflation, whilst left-leaning governments would generally support policies that favour full employment and hence tend to result in wage increases and inflation. For example, from 1935–1949 New Zealand's first Labour government implemented a broad array of social and economic legislation, including a 40-hour working week, a minimum basic wage, a state house program, and compulsory unionism. There is a growing literature on the link between politics and asset prices, which is unsurprising given the evidence that governments sometimes attempt to manage the economy for their own political purposes via both fiscal policy (Brender and Drazen, 2005) and monetary policy (Heckelman and Wood, 2005). Contrary to the commonly held view that businesses prefer right-leaning governments, Santa Clara and Valkanov (2003) find the US stock market does better during Democrat presidential terms. However, the robustness of this conclusion is now being questioned. Snowberg, Wolfers and Zitzewitz (2007) find, using political outcome betting market data, that the US stock market rises when a Republican victory appears more likely while Powell, Shi, Smith and Whaley (2007) show that when the entire left versus right political history is examined the US presidential puzzle disappears. International evidence also conflicts with the Santa Clara and Valkanov (2003) finding. Hudson, Keasey and Dempsey (1998) find stock markets prefer the right-wing conservative party in the UK, while Bohl and Gottschalk (2006) find stock markets out-perform under right-wing governments in some of the 15 countries1 they examine. Recent Australasian studies of political cycles also highlight higher stock market returns under right-leaning governments in Australia (Worthington, 2006)2 and New Zealand (Cahan et al., 2005). However, to the authors' knowledge, no research has examined the link between political cycles and other major asset classes such as bonds and property. Therefore, further research into the impact of political parties on asset returns is warranted, especially when considering the aging population in Western countries and its reliance on stock market investments for savings. The first proposition of this paper is that the political process, or electoral cycle, influences the relative levels of wages, inflation and unemployment. Mankiw (2001) concludes “the inflation–unemployment trade-off has a secure place in economics. Almost all economists today agree that monetary policy influences unemployment, at least temporarily, and determines inflation, at least in the long run.” (p. C59). Surprisingly, this type of analysis is relatively unexplored. In the United States, Haynes and Stone (1990) explore a political cycle in inflation, but to the authors' knowledge this type of election cycle is an unexplored area in Australasia. The second proposition is linked to the first, and is that the electoral cycle influences the relative level of interest rates, bond prices, stock prices, and property prices. If a link exists between the political cycle and inflation then there is a prima facie case that the political cycle also impacts on asset returns, as wage levels and inflation are a key feed into interest rate levels and other asset prices. The purpose of this paper is to examine these two propositions. This paper makes several important contributions. Firstly, the Australia and New Zealand political systems allow for a more precise examination of the influence, if any, of political cycles on asset returns due to the clearly defined electoral cycle in these countries. Secondly, we extend the existing debate by investigating the three key asset classes of equities, property and bonds. Thirdly, we include robustness checks for recent criticisms levelled at the existing presidential puzzle literature. We find evidence that supports the view that there is a political cycle in inflation in both Australia and New Zealand and related to this, we find stock, bond and property returns display characteristics broadly consistent with a political cycle interpretation of asset market returns. Stock markets tend to do better during right-wing governments and this finding holds against world return correlations and dummy variable persistence robustness checks. The paper is organised as follows. Background detail on Australian and New Zealand political history is provided in the following section. In Section 3 we outline testable hypotheses regarding political cycles and asset returns. Section 4 presents the data and methodology. The results are presented in Section 5 and checks of robustness in Section 6. Section 7 concludes the paper.

The link between politics and asset prices is attracting increased attention from researchers. In a seminal paper Santa Clara and Valkanov (2003) find the US stock market does better during left-wing Democrat presidential terms. However, the robustness of this conclusion is now being questioned. Powell, Shi, Smith and Whaley (2007) show that when the entire left versus right political history is examined the US presidential puzzle disappears, while international studies (Hudson et al., 1998 and Bohl and Gottschalk, 2006) find stock markets perform better under right-wing governments in some countries. We extend the political cycle literature by considering the link between governments and stock, bond, and property markets. We argue that it is likely that all asset markets are affected by the inflationary effects of government polices so consideration should be given to each. We consider the countries of Australia and New Zealand because their political systems allow for a more precise examination of the influence, if any, of political cycles on asset returns. Finally, we include robustness checks for recent criticisms levelled at the existing presidential puzzle literature. We argue that left-of-centre governments are more concerned with controlling unemployment than right-of-centre governments and that inflation differentials could be a natural consequence of this process. These differential inflationary patterns have consequences for investment markets. More specifically, we argue that stocks and bonds are more adversely affected by inflation than property given the natural inflation hedge characteristics of property. We test these propositions in the unique markets of Australia and New Zealand where a clear left-of-centre versus right-of-centre political system has existed since the earlier part of the 20th century. First, we find evidence that the political cycle influences inflation in both Australia and New Zealand. Left-of-centre governments experience significantly higher inflation rates than their right-of-centre counterparts. Second and interrelated with this first finding, we find stock, property, and bond returns display characteristics broadly consistent with a political cycle interpretation of asset market returns. We find that the stock markets in both Australia and New Zealand outperform during periods when each country is controlled by governments formed from the right of the political spectrum. The superior stock market returns during right-wing government terms remains after controlling for world equity movements and dummy variable persistence. Given the natural inflation hedge of property and the “pro-housing” policies of the left-wing parties we expected to find that property outperforms when left-wing parties are in office. This is evident in the New Zealand market. Finally, in the bond market we find that while there is no difference in returns during periods led by either the right or left, there are typically capital gains on bonds during right-led governments and capital losses on average when left-wing administrations are in power. Our findings have important implications given the aging population in Western countries and their reliance on stock market investments for savings.