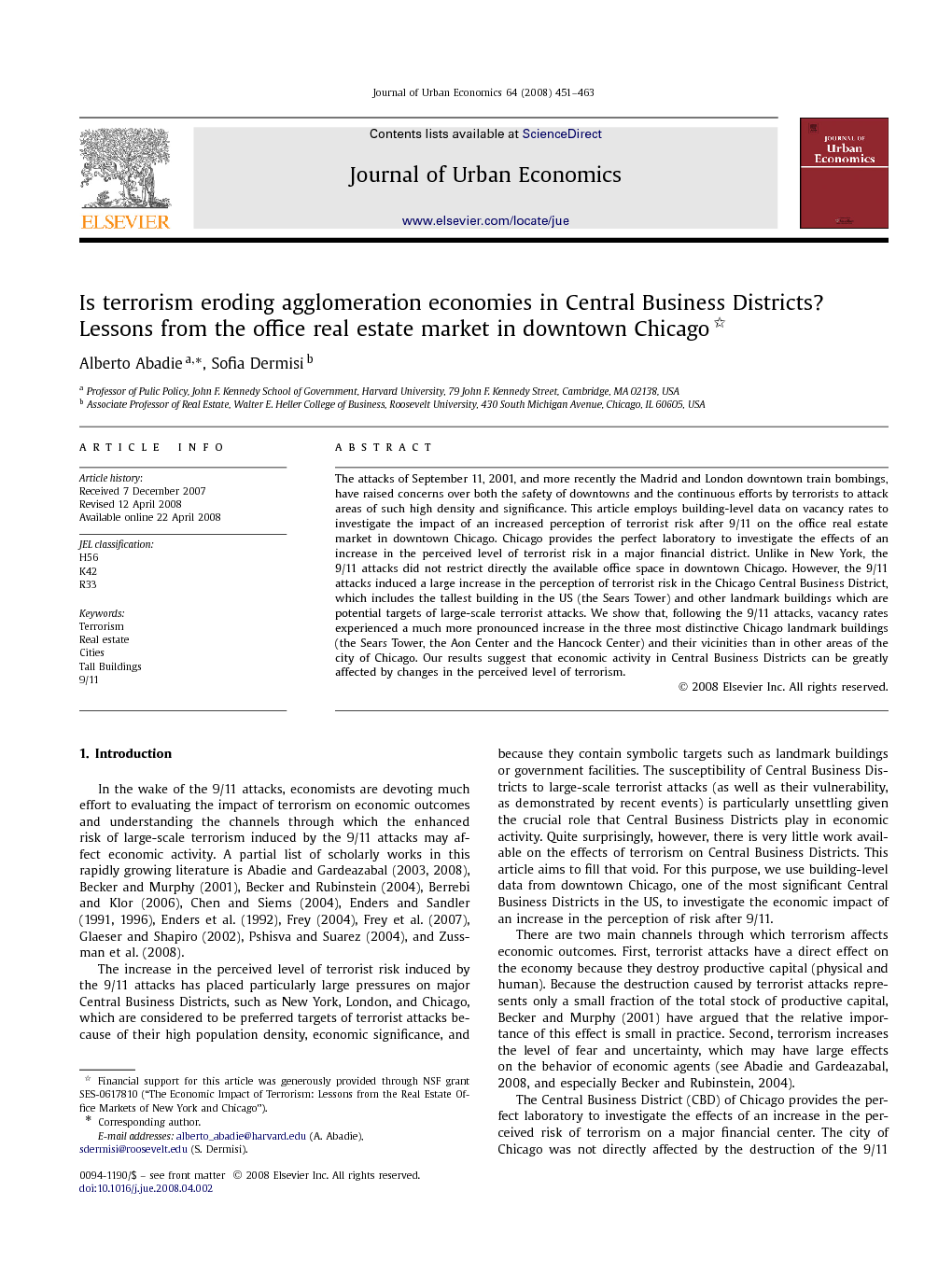 The attacks of September 11, 2001, and more recently the Madrid and London downtown train bombings, have raised concerns over both the safety of downtowns and the continuous efforts by terrorists to attack areas of such high density and significance. This article employs building-level data on vacancy rates to investigate the impact of an increased perception of terrorist risk after 9/11 on the office real estate market in downtown Chicago. Chicago provides the perfect laboratory to investigate the effects of an increase in the perceived level of terrorist risk in a major financial district. Unlike in New York, the 9/11 attacks did not restrict directly the available office space in downtown Chicago. However, the 9/11 attacks induced a large increase in the perception of terrorist risk in the Chicago Central Business District, which includes the tallest building in the US (the Sears Tower) and other landmark buildings which are potential targets of large-scale terrorist attacks. We show that, following the 9/11 attacks, vacancy rates experienced a much more pronounced increase in the three most distinctive Chicago landmark buildings (the Sears Tower, the Aon Center and the Hancock Center) and their vicinities than in other areas of the city of Chicago. Our results suggest that economic activity in Central Business Districts can be greatly affected by changes in the perceived level of terrorism.

The results of this study suggest that the 9/11 attacks created centrifugal forces that influenced the location decision of high-end office tenants in downtown Chicago. We use the panel data structure of our data set to eliminate the potential confounding effects that unmeasured building characteristics and common shocks to the Chicago office real estate market may have had in our analysis. We show that vacancy rates increased in Class A and B office buildings in Chicago after the 9/11 attacks. Moreover, we show that these increases were more severe for office properties located in or nearby landmark buildings that are considered preferred targets for terrorist attacks. In addition, we demonstrate that our results are remarkably robust to an extensive set of alternative specifications. The results of this article are particularly unsettling, given the critical role that the economic literature assigns to agglomeration economies in cities as a motor of economic growth. On the bright side, our analysis focuses on a period during which the perceived threat of terrorism in Central Business Districts has been particularly elevated. The results in Davis and Weinstein (2002), Glaeser and Shapiro (2002), Brakman et al. (2004) and Miguel and Roland (2006) suggest that if the perception of terrorist risk in cities were to return to the pre-9/11 levels, the long-run growth of cities would not be affected by the 9/11 attacks.