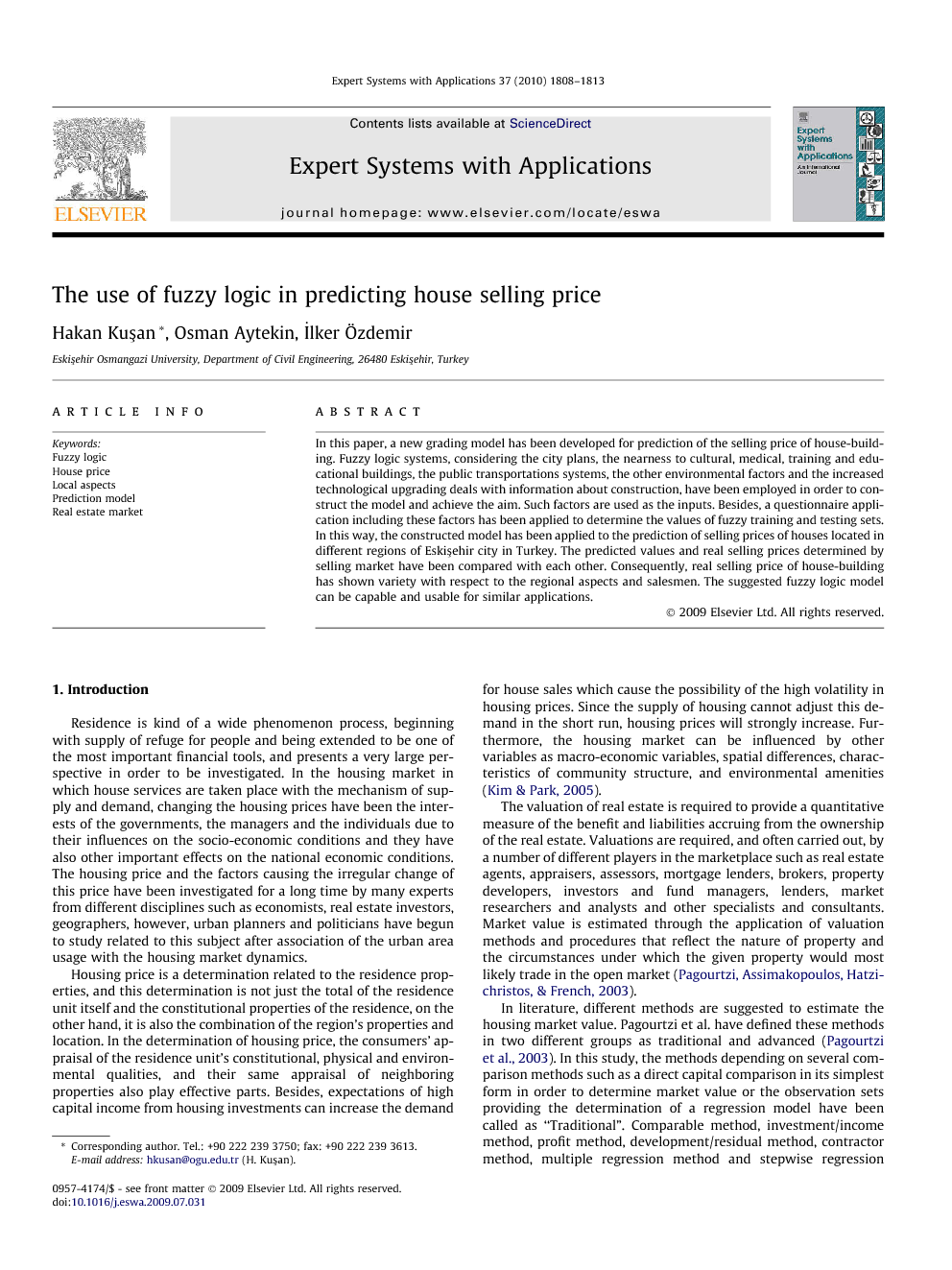 In this paper, a new grading model has been developed for prediction of the selling price of house-building. Fuzzy logic systems, considering the city plans, the nearness to cultural, medical, training and educational buildings, the public transportations systems, the other environmental factors and the increased technological upgrading deals with information about construction, have been employed in order to construct the model and achieve the aim. Such factors are used as the inputs. Besides, a questionnaire application including these factors has been applied to determine the values of fuzzy training and testing sets. In this way, the constructed model has been applied to the prediction of selling prices of houses located in different regions of Eskişehir city in Turkey. The predicted values and real selling prices determined by selling market have been compared with each other. Consequently, real selling price of house-building has shown variety with respect to the regional aspects and salesmen. The suggested fuzzy logic model can be capable and usable for similar applications.

Residence is kind of a wide phenomenon process, beginning with supply of refuge for people and being extended to be one of the most important financial tools, and presents a very large perspective in order to be investigated. In the housing market in which house services are taken place with the mechanism of supply and demand, changing the housing prices have been the interests of the governments, the managers and the individuals due to their influences on the socio-economic conditions and they have also other important effects on the national economic conditions. The housing price and the factors causing the irregular change of this price have been investigated for a long time by many experts from different disciplines such as economists, real estate investors, geographers, however, urban planners and politicians have begun to study related to this subject after association of the urban area usage with the housing market dynamics. Housing price is a determination related to the residence properties, and this determination is not just the total of the residence unit itself and the constitutional properties of the residence, on the other hand, it is also the combination of the region’s properties and location. In the determination of housing price, the consumers’ appraisal of the residence unit’s constitutional, physical and environmental qualities, and their same appraisal of neighboring properties also play effective parts. Besides, expectations of high capital income from housing investments can increase the demand for house sales which cause the possibility of the high volatility in housing prices. Since the supply of housing cannot adjust this demand in the short run, housing prices will strongly increase. Furthermore, the housing market can be influenced by other variables as macro-economic variables, spatial differences, characteristics of community structure, and environmental amenities (Kim & Park, 2005). The valuation of real estate is required to provide a quantitative measure of the benefit and liabilities accruing from the ownership of the real estate. Valuations are required, and often carried out, by a number of different players in the marketplace such as real estate agents, appraisers, assessors, mortgage lenders, brokers, property developers, investors and fund managers, lenders, market researchers and analysts and other specialists and consultants. Market value is estimated through the application of valuation methods and procedures that reflect the nature of property and the circumstances under which the given property would most likely trade in the open market (Pagourtzi, Assimakopoulos, Hatzichristos, & French, 2003). In literature, different methods are suggested to estimate the housing market value. Pagourtzi et al. have defined these methods in two different groups as traditional and advanced (Pagourtzi et al., 2003). In this study, the methods depending on several comparison methods such as a direct capital comparison in its simplest form in order to determine market value or the observation sets providing the determination of a regression model have been called as “Traditional”. Comparable method, investment/income method, profit method, development/residual method, contractor method, multiple regression method and stepwise regression method can be given as examples for traditional methods. Additionally, the other methods simulating the thought processes of the market players in which the estimation of the exchange point is being attempted have been called as “Advanced” according to this study. Artificial neural networks (ANN), hedonic pricing method, spatial analysis method, fuzzy logic (FL), and Autoregressive Moving Average (ARMA) method can be said as the examples of advanced methods. Most of the price studies have been performed by using the other methods based on hedonic method and multiple regression analysis. Basically, these methods are generally used and suitable for the certain estimation of the relation between prices and several variables. Nevertheless, these techniques can lead problems if the process of pricing is extended to contain the points of view as outliers, non-linearity, spatial and other kinds of relations between observations, discontinuity and fuzziness. Therefore, new lookups are being continued determining housing price by profiting from recent computer technologies. In this way, some approaches, presenting the influences on the real estate by analyzing many criteria for the determination of its price and revealing the best combinations according to these influences, have been developed. Dilmore may be the first expert who accepts the potential practice of FL for the properties of real estates. For instance, one of the studies performed by Dilmore has indicated many important points about FL (Dilmore, 1993). In this study, it is aimed to predict the house unit prices (UPs) by using FL. The factors affecting the house prices have been determined and chosen as house factors, environmental factors, transportation factors and regional socio-economic factors. After then, these factors have been rearranged into related different groups to explain and model their effects on the house prices in detail. The data about these factors to be used in FL model have been obtained from a prepared questionnaire application. One hundred and sixty of these data have been used for training set and 40 of them have been used for testing set in the constructed FL model. UPs obtained from the model and the real UP values have been compared to each other to determine the precision of the FL model suggested in this study.

In this section, results obtained from FL model have been presented in Table 2 and illustrated in Fig. 4. The errors occurred during the training and testing processes in FL model can be expressed as a root mean squared error (RMSE) and has been calculated by using Eq. If suggested statistical values obtained from UPs model are discussed, it has been observed that the estimated UPs values can provide a close prediction to the real UPs values and the model can be available to use for UPs prediction of houses located in different regions of Eskişehir city in Turkey. In other words, the testing results in the model have also been shown that the predictions of UPs are very close to the unit real price values. Furthermore, in the scope of this study, it is required to emphasize that suggested FL model, in which the determinations of UPs that have the main objectives and the values of criteria affecting the objectives are limited to certain range, by considering the properties of houses in different regions of Eskişehir city in Turkey. Because of these limited number of data and factors in certain narrow range, the model cannot be extended for general applications. Therefore, similar models can be produced with the new studies to be continued in this way by extending the criteria and the limit values about the house sale prices. As a final result, the FL can be applied to predict the house sale price for different cities in the world.