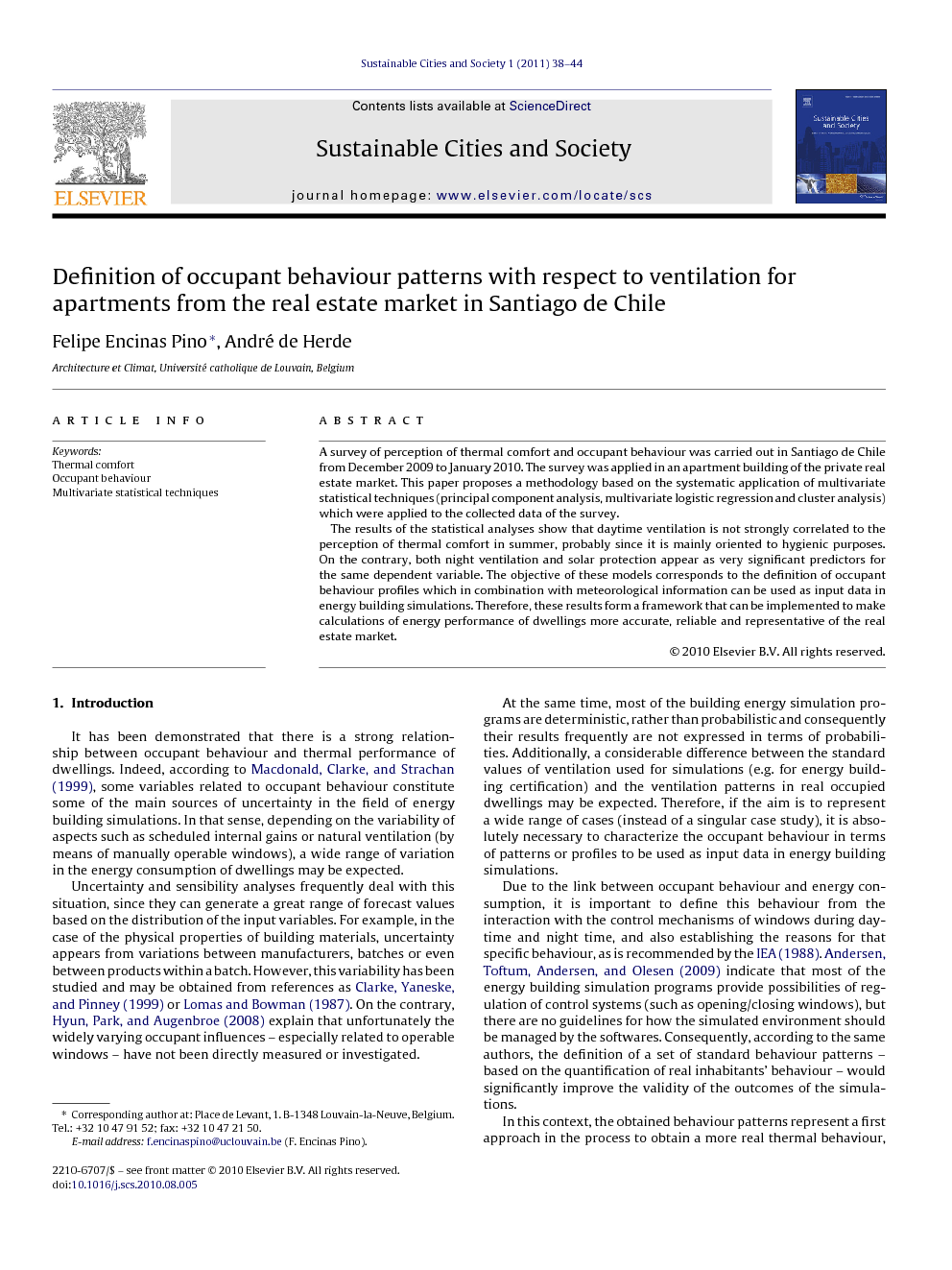 A survey of perception of thermal comfort and occupant behaviour was carried out in Santiago de Chile from December 2009 to January 2010. The survey was applied in an apartment building of the private real estate market. This paper proposes a methodology based on the systematic application of multivariate statistical techniques (principal component analysis, multivariate logistic regression and cluster analysis) which were applied to the collected data of the survey. The results of the statistical analyses show that daytime ventilation is not strongly correlated to the perception of thermal comfort in summer, probably since it is mainly oriented to hygienic purposes. On the contrary, both night ventilation and solar protection appear as very significant predictors for the same dependent variable. The objective of these models corresponds to the definition of occupant behaviour profiles which in combination with meteorological information can be used as input data in energy building simulations. Therefore, these results form a framework that can be implemented to make calculations of energy performance of dwellings more accurate, reliable and representative of the real estate market.

It has been demonstrated that there is a strong relationship between occupant behaviour and thermal performance of dwellings. Indeed, according to Macdonald, Clarke, and Strachan (1999), some variables related to occupant behaviour constitute some of the main sources of uncertainty in the field of energy building simulations. In that sense, depending on the variability of aspects such as scheduled internal gains or natural ventilation (by means of manually operable windows), a wide range of variation in the energy consumption of dwellings may be expected. Uncertainty and sensibility analyses frequently deal with this situation, since they can generate a great range of forecast values based on the distribution of the input variables. For example, in the case of the physical properties of building materials, uncertainty appears from variations between manufacturers, batches or even between products within a batch. However, this variability has been studied and may be obtained from references as Clarke, Yaneske, and Pinney (1999) or Lomas and Bowman (1987). On the contrary, Hyun, Park, and Augenbroe (2008) explain that unfortunately the widely varying occupant influences – especially related to operable windows – have not been directly measured or investigated. At the same time, most of the building energy simulation programs are deterministic, rather than probabilistic and consequently their results frequently are not expressed in terms of probabilities. Additionally, a considerable difference between the standard values of ventilation used for simulations (e.g. for energy building certification) and the ventilation patterns in real occupied dwellings may be expected. Therefore, if the aim is to represent a wide range of cases (instead of a singular case study), it is absolutely necessary to characterize the occupant behaviour in terms of patterns or profiles to be used as input data in energy building simulations. Due to the link between occupant behaviour and energy consumption, it is important to define this behaviour from the interaction with the control mechanisms of windows during daytime and night time, and also establishing the reasons for that specific behaviour, as is recommended by the IEA (1988). Andersen, Toftum, Andersen, and Olesen (2009) indicate that most of the energy building simulation programs provide possibilities of regulation of control systems (such as opening/closing windows), but there are no guidelines for how the simulated environment should be managed by the softwares. Consequently, according to the same authors, the definition of a set of standard behaviour patterns – based on the quantification of real inhabitants’ behaviour – would significantly improve the validity of the outcomes of the simulations. In this context, the obtained behaviour patterns represent a first approach in the process to obtain a more real thermal behaviour, since this information needs to be combined with meteorological data. Based on variables such as air temperature [°C], wind speed [m/s] and wind direction [°] is possible to establish accurate airflow patterns in terms of ventilation rates. These results can help to understand occupant behaviour as a function of the thermal performance of apartments (and depending on some variables such as orientation or windows area).

The explanatory analysis carried out through the PCA and the logistic regression established the relative importance of the different variables that determine the perception of thermal comfort of an apartment in Santiago de Chile. By means of these techniques, the role of ventilation in the thermal sensation of the occupants was clearly identified, associating daytime ventilation with hygienic purposes, while night ventilation appeared directly related to passive cooling. Also, the lack of significance of the variable related to daytime ventilation in the logistic equation reveals that inhabitants probably are not completely aware of the impact of ventilation over the thermal comfort. These observations are very useful to understand the perception of occupants about the different aspects related to the thermal comfort of apartments in Santiago de Chile. Nonetheless, if one of the declared objectives of the survey is to provide information for energy building simulations, it is absolutely necessary to obtain hard data from the collected information. This was carried out by means of a cluster analysis. As was explained, the definition of ventilation regimes is one of the main sources of uncertainly in an energy building simulation, mainly due to its dependence on the inhabitant's behaviour (by means of windows opening). However, if these ventilation regimes are defined based on a more real approach, the results of the simulation are more representative and reliable and in consequence, uncertainty decreases. The proposed ventilation patterns from the collected data of the survey represent the first step to obtain hard data which could be directly applied to thermal simulations. A second step related to the definition of airflow patterns (ventilation rates) is proposed as further research. Using meteorological information of the Dirección Meteorológica de Chile (for the city of Santiago), ventilation profiles can be accurately determined (where occupant behaviour patterns are combined with data about winds and air temperature). In this context, outcomes of the energy building simulations may help to explain occupant behaviour with respect to windows opening as function of, for example, the difference between external and indoor temperatures.