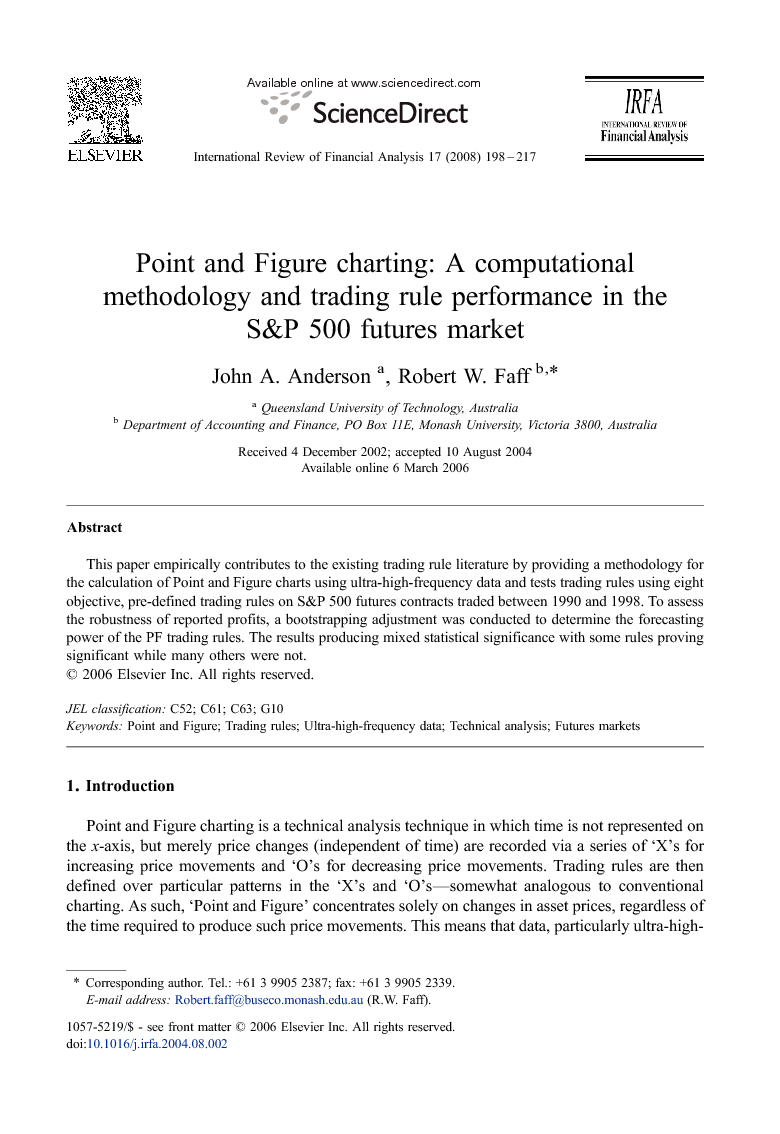 This paper empirically contributes to the existing trading rule literature by providing a methodology for the calculation of Point and Figure charts using ultra-high-frequency data and tests trading rules using eight objective, pre-defined trading rules on S&P 500 futures contracts traded between 1990 and 1998. To assess the robustness of reported profits, a bootstrapping adjustment was conducted to determine the forecasting power of the PF trading rules. The results producing mixed statistical significance with some rules proving significant while many others were not.

Point and Figure charting is a technical analysis technique in which time is not represented on the x-axis, but merely price changes (independent of time) are recorded via a series of ‘X’s for increasing price movements and ‘O’s for decreasing price movements. Trading rules are then defined over particular patterns in the ‘X’s and ‘O’s—somewhat analogous to conventional charting. As such, ‘Point and Figure’ concentrates solely on changes in asset prices, regardless of the time required to produce such price movements. This means that data, particularly ultra-high-frequency data, can be considerably condensed by discarding small price changes, while still capturing user-determined levels of ‘material’ price changes on a continuous basis. Anecdotal evidence suggests that the technique has been known and used by practitioners for over 100 years. Indeed, the earliest reference to Point and Figure charting known to us is deVilliers (1933), who claims that the method has “…grown from crude beginnings more than fifty years ago [and is] …herewith described for the first time” (deVilliers, 1933:7). Moreover, Point and Figure charting is now a standard feature on many widely used professional market analysis software systems.1Taylor and Allen (1992), surveyed foreign exchange dealers in London about their analytical techniques and found that over 90% of survey respondents relied on technical analysis at some point for asset allocation decisions. Therefore, we assume here that Point and Figure does play some role in the trading strategies of financial markets practitioners, but the academic literature has largely ignored the question of the usefulness of this technique. The relevant literature on Point and Figure is extremely small—to our knowledge only three academic works have been published, two written in German by Hauschild and Winkelmann (1985) and Stottner (1990) and the most recent by Elliot and Hinz (2002).2 The remainder of the literature has been published in the form of books including Aby (1996), Cohen (1960), Dorsey (1995), Seligman (1962), Wheelan (1954), Zieg and Kaufman (1975) and Davis (1965).3 Hauschild and Winkelmann (1985) examined several simple Point and Figure trading rules using daily data on 40 companies listed on German equity markets between 1970 and 1980. Their use of daily data can produce some problems with the calculation of Point and Figure results.4 While they did not present results for individual firms, based on their aggregated results across all firms, the Point and Figure technique was unable to outperform a simple buy-and-hold strategy for the period. Stottner (1990) also focused on equity markets examining 445 German and overseas companies. The data set comprised closing data for periods of between 70 months and 14 years prior to the conclusion of the test in February 1989. Stottner (1990) used Point and Figure charting but in a manner more akin to a simple filter-rule strategy with no complex pattern assessment. As with Hauschild and Winkelmann (1985), he also found that Point and Figure produced trading results inferior to a simple buy-and-hold strategy. However, the use of the filter rule type approach by Stottner (1990) casts some doubt as to the ability to fully assess the results as an accurate reflection of Point and Figure trading rule performance during the test period. This is because the technique adopted in Stottner (1990) considers very simple Point and Figure trading rules without testing the rules that have appeared in much of the popular (practitioner) Point and Figure literature. As an example from the non-academic literature, Davis (1965) examined daily price data for 1100 US equities between 1954 and 1964 with remarkable results. Of the eight different buy signals examined, profits were produced on 71–92% of trades across the different rules. All eight of the sell signals examined were profitable in greater than 80% of trades modelled in the simulation. Claims of such startling profitability demands a scientific assessment of his method using recent data to see if such consistent profitability is available to contemporary exponents of the Point and Figure trading technique. Accordingly, the current paper is designed to bridge that gap between the practitioner and academic literature by providing a rigorous test of the various Point and Figure chart ‘patterns’ said to produce profitable trading opportunities. These are tested by identifying each of the patterns, then simulating the trades specified by the trading rules on S&P 500 futures contracts and reporting the profitability. The remainder of this paper is structured as follows. Section 2 provides a computational specification of Point and Figure as applied in this paper. Section 3 defines the trading signals/rules that are analysed, while Section 4 presents the results and the paper concludes in Section 5. Appendix A is also provided documenting the step-by-step approach to constructing a Point and Figure chart.

This study has tested the plausibility of trading rules using specific buy/sell signals accompanying Point and Figure charting, claimed to be one of the oldest practitioner techniques with origins dating back to the 19th century. The trading rules, in contrast with other popular ‘chart patterns’, provided a replicable trading rule methodology and were applied to the S&P 500 futures contracts traded between 1990 and 1998. Our results suggest that while profits were available to speculators on the S&P 500 futures contract, as with trading rule studies generally, profits were not consistently statistically available. This is because loss-generating years were reported—profits were only available on aggregate. Further, most of the profits appear to have derived from the relatively high volatility levels. During years when volatility was low, profit results were mixed, although the higher daily volatility observed in the late 1990s meant that large profits were available to speculators using Point and Figure trading rules. However, bootstrapping produced fairly mixed statistical results.