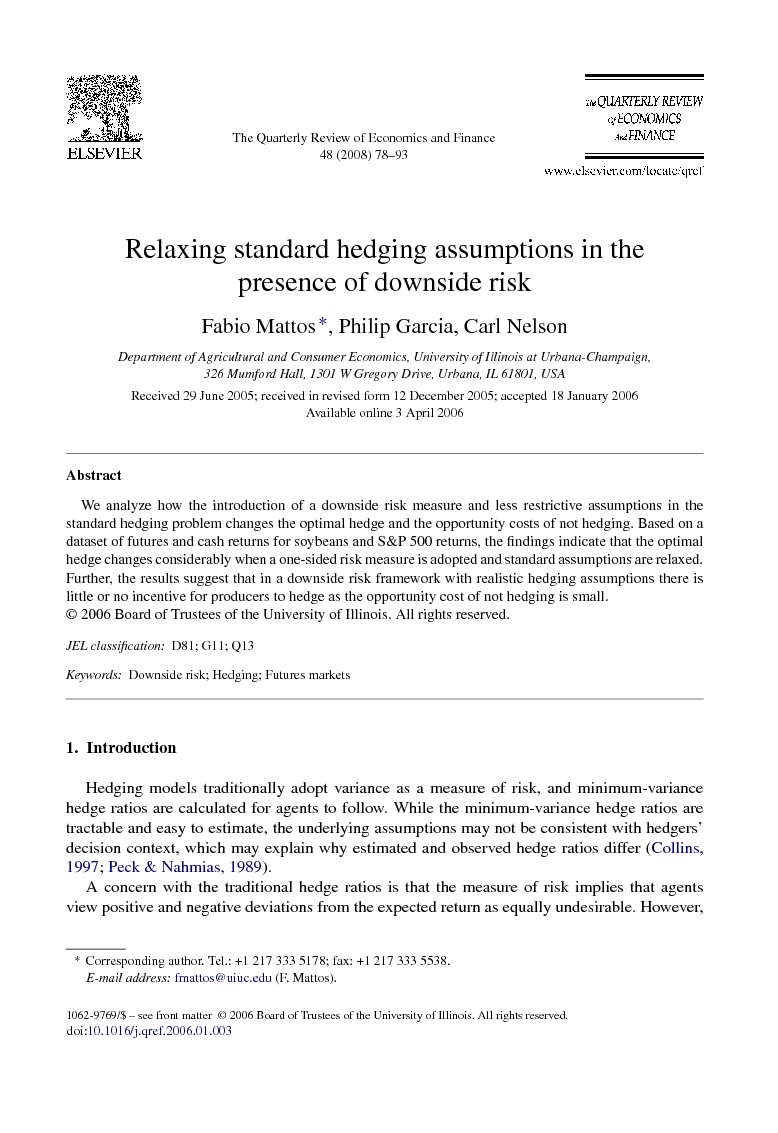 We analyze how the introduction of a downside risk measure and less restrictive assumptions in the standard hedging problem changes the optimal hedge and the opportunity costs of not hedging. Based on a dataset of futures and cash returns for soybeans and S&P 500 returns, the findings indicate that the optimal hedge changes considerably when a one-sided risk measure is adopted and standard assumptions are relaxed. Further, the results suggest that in a downside risk framework with realistic hedging assumptions there is little or no incentive for producers to hedge as the opportunity cost of not hedging is small.

Hedging models traditionally adopt variance as a measure of risk, and minimum-variance hedge ratios are calculated for agents to follow. While the minimum-variance hedge ratios are tractable and easy to estimate, the underlying assumptions may not be consistent with hedgers’ decision context, which may explain why estimated and observed hedge ratios differ (Collins, 1997; Peck & Nahmias, 1989). A concern with the traditional hedge ratios is that the measure of risk implies that agents view positive and negative deviations from the expected return as equally undesirable. However, agents frequently perceive risk as a failure to achieve a certain level of return (Unser, 2000). In this context, downside risk measures, which assume that returns below a certain reference level involve risk and returns above this reference level represent better investment opportunities, can be highly relevant (Grootveld & Hallerbach, 1999). In recent survey papers, Lien and Tse (2002) argue that a one-sided measure is more relevant in a hedging context than the traditional two-sided measure represented by the variance, and Chen, Lee, and Shrestha (2003) emphasize that one-sided risk measures like the semivariance are consistent with individuals’ risk perceptions. Standard hedging models have also been criticized because of their restrictive set of assumptions about agents’ behavior. Chen et al. (2003) identify that almost all hedge ratio research fails to incorporate transaction costs and the possibility of investments in assets other than cash and futures positions. But these assumptions are restrictive and may not reflect agent's situations. By definition, there are margin deposit requirements and brokerage fees in futures markets. Further, opportunities to borrow and lend, as well as to invest in alternative investments, are at times available to hedgers. Lence, 1995 and Lence, 1996 demonstrated that utility maximizing mean-variance and minimum-variance hedge ratios can differ considerably under realistic conditions when the standard assumptions are relaxed, leading him to question the usefulness of minimum-variance hedge ratios and the preoccupation with their measurement. But as Chen et al. (2003) emphasize Lence's findings are based on a specific utility function and a given set of return distributions, and it remains to be seen if the findings hold for downside risk hedge ratios. Following Chen et al. (2003), we investigate how estimated hedge ratios and the opportunity cost of failing to hedge are affected when risk is measured in a downside framework, and allowing for alternative investments and the introduction of brokerage fees. Hedge ratios using futures contracts are calculated under utility maximization. To identify clearly the effects of the utility function, the return distributions, and the presence of downside risk, we develop a simulation that is similar to Lence's operational decision of hedging an agricultural commodity. We then use a more general and realistic utility specification, the constant relative risk averse (CRRA) function to model preferences which allows for the absolute level of risk aversion to change with wealth. A data set of recent soybean futures and cash returns, and the S&P returns are used to perform the analysis. Since the joint distribution of the variables is elliptically symmetric our CRRA function satisfies the location-scale condition and our two-parameter preference function can reflect any utility function in an expected utility model. Finally, a lower partial moment (LPM) function is used to reflect the presence of downside risk which has been identified as a more realistic measure of risk in a hedging context.