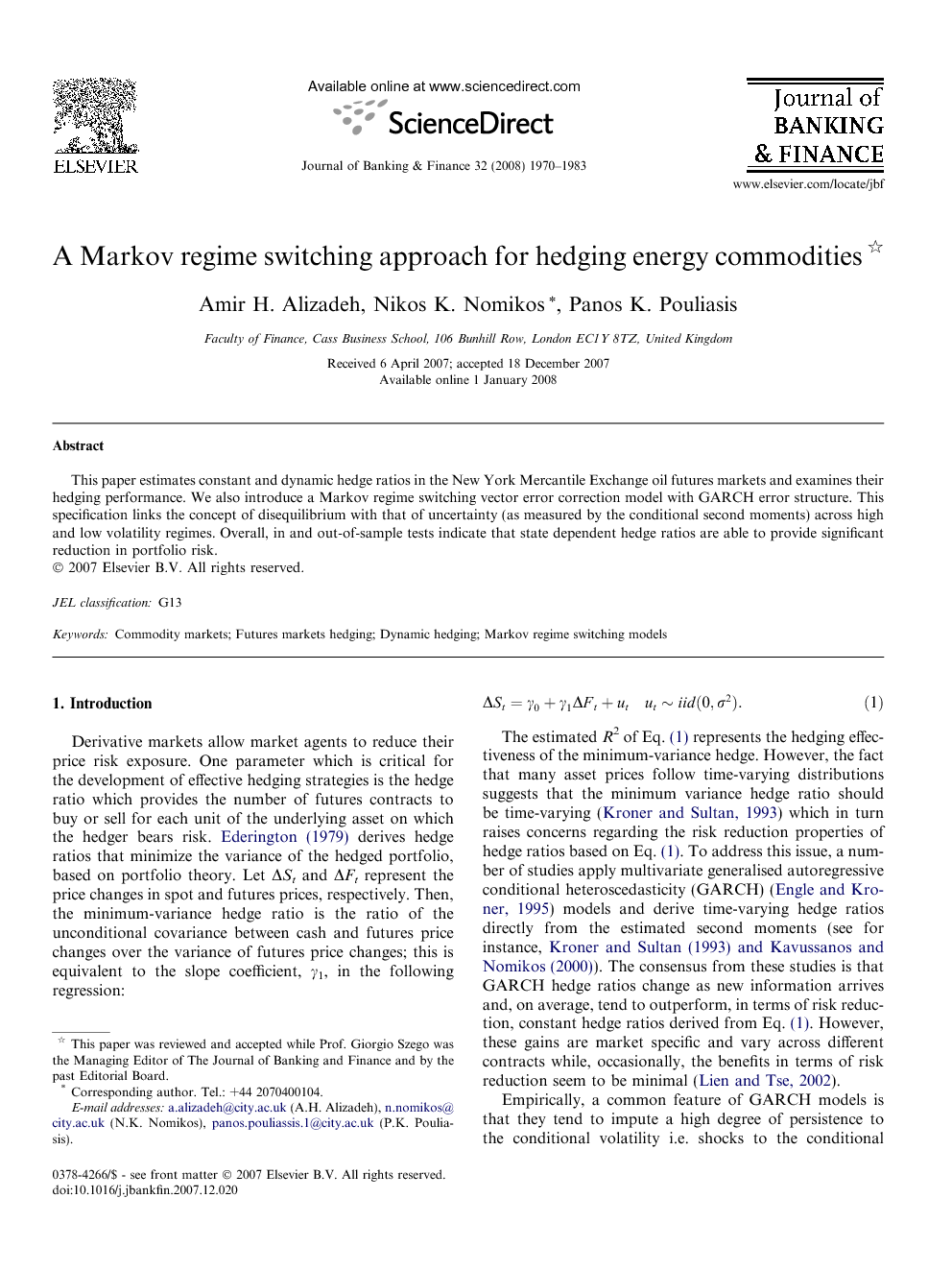 This paper estimates constant and dynamic hedge ratios in the New York Mercantile Exchange oil futures markets and examines their hedging performance. We also introduce a Markov regime switching vector error correction model with GARCH error structure. This specification links the concept of disequilibrium with that of uncertainty (as measured by the conditional second moments) across high and low volatility regimes. Overall, in and out-of-sample tests indicate that state dependent hedge ratios are able to provide significant reduction in portfolio risk.

In this paper we examined the performance of hedge ratios generated from Markov Regime Switching models in the oil futures markets. The rationale behind the use of these models stems from the fact that the dynamic relationship between spot and futures prices may be characterized by regime shifts. This, in turn, suggests that by allowing the hedge ratio to be dependent upon the ‘‘state of the market”, one may obtain more efficient hedge ratios and hence, superior hedging performance compared to the methods which are currently being employed. We introduce a Markov regime switching vector error correction model with GARCH error structure. This specification links the concept of disequilibrium (as measured by the error correction coefficients) with that of uncertainty (as measured by the conditional second moments) across high and low volatility regimes. The effectiveness of the MRS time-varying hedge ratios is investigated in the NYMEX WTI crude Oil, unleaded gasoline and heating oil markets. The estimated models indicate that there is marked asymmetry in both conditional means and conditional volatilities under different market conditions. Moreover, all the MRS-based hedge ratios appear to be higher when the volatility in the market is low, a finding that is in line with theory. In and out-of-sample tests indicate that by allowing the variances and the covariance of spot-futures returns as well as the error correction coefficients to be state dependent,hedging effectiveness is significantly improved in most cases, as indicated by White’s (2000) reality check. Overall, the results indicate that using MRS models market agents may be able to obtain superior gains, measured in terms of both variance reduction and increase in utility. This finding holds even when we examine the downside risk and consider the asymmetric risk profile of long and short hedgers.