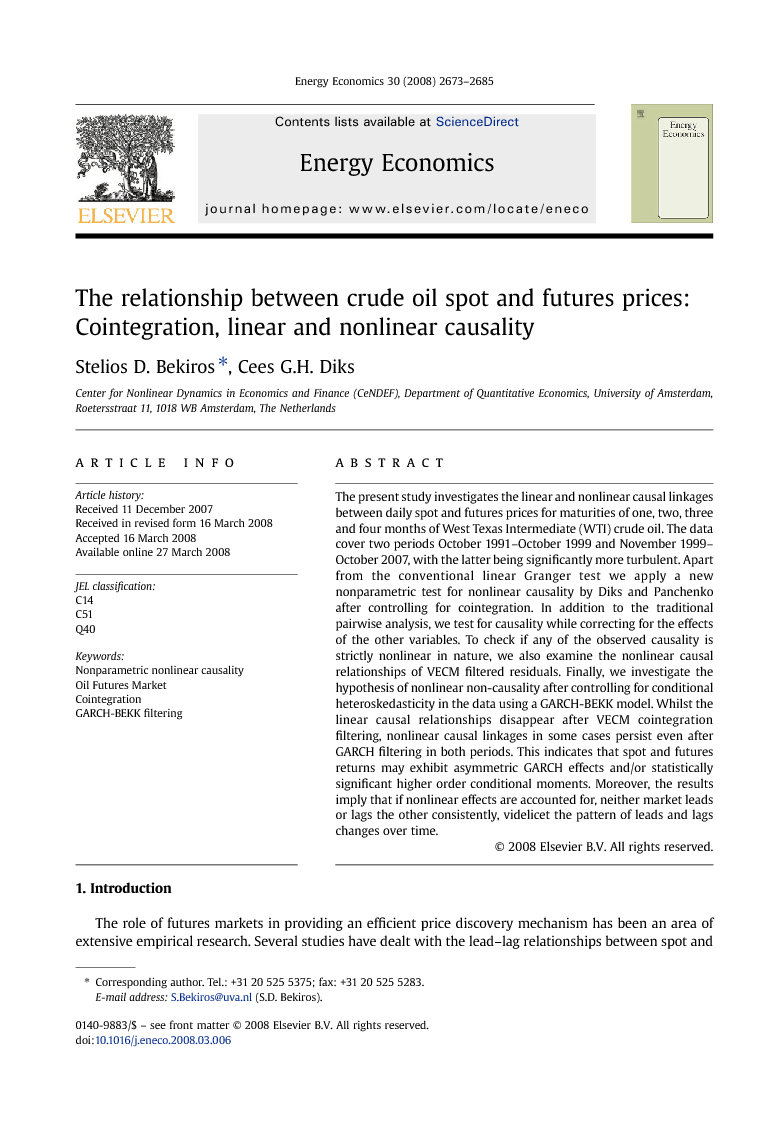 The present study investigates the linear and nonlinear causal linkages between daily spot and futures prices for maturities of one, two, three and four months of West Texas Intermediate (WTI) crude oil. The data cover two periods October 1991–October 1999 and November 1999–October 2007, with the latter being significantly more turbulent. Apart from the conventional linear Granger test we apply a new nonparametric test for nonlinear causality by Diks and Panchenko after controlling for cointegration. In addition to the traditional pairwise analysis, we test for causality while correcting for the effects of the other variables. To check if any of the observed causality is strictly nonlinear in nature, we also examine the nonlinear causal relationships of VECM filtered residuals. Finally, we investigate the hypothesis of nonlinear non-causality after controlling for conditional heteroskedasticity in the data using a GARCH-BEKK model. Whilst the linear causal relationships disappear after VECM cointegration filtering, nonlinear causal linkages in some cases persist even after GARCH filtering in both periods. This indicates that spot and futures returns may exhibit asymmetric GARCH effects and/or statistically significant higher order conditional moments. Moreover, the results imply that if nonlinear effects are accounted for, neither market leads or lags the other consistently, videlicet the pattern of leads and lags changes over time.

In the present paper we investigated the existence of linear and nonlinear causal relationships between the daily spot and futures prices for maturities of one, two, three and four months of West Texas Intermediate (WTI), which is the underlying commodity of New York Mercantile Exchange's (NYMEX) oil futures contracts. The data covered two separate periods, namely PI: 10/21/1991–10/29/1999 and PII: 11/1/ 1999–10/30/2007, with the latter being significantly more turbulent. The study contributed to the literature on the lead–lag relationships between the spot and futures markets in several ways. In particular, it was shown that the pairwise VECM modeling suggested a strong bi-directional Granger causality between spot and futures prices in both periods, whereas the five-variate implementation resulted in a uni-directional causal linkage fromspot to futures prices only in PII. This empirical evidence appears to be in contrast to the results of Silvapulle and Moosa (1999) on the futures to spot prices uni-directional relationship. Additionally, whilst the linear causal relationships have disappeared after the cointegration filtering, nonlinear causal linkages in some cases were revealed and more importantly persisted even after multivariate GARCH filtering during both periods. Interestingly, it was shown that the five-variate implementation of the GARCH-BEKK filtering, as opposed to the bi-variate, captured the volatility transmission mechanism more effectively and removed the nonlinear causality due to second moment spillover effects. Moreover, the results imply that if nonlinear effects are accounted for, neither market leads or lags the other consistently, or in other words the pattern of leads and lags changes over time. Given that causality can vary from one direction to the other at any point in time, a finding of bi-directional causality over the sample period may be taken to imply a changing pattern of leads and lags over time, providing support to the Kawaller et al. (1988) hypothesis. According to that hypothesis, market participants filter information relevant to their positions as new information arrives and, at any time point, spotmay lead futures and vice versa. Hence it can be safely concluded that, although in theory the futures market play a bigger role in the price discovery process, the spot market also plays an important role in this respect. The empirical evidence of a causal linkage from spot to futures prices can be attributed to the sequence of actions taken from the three market participants following a spot price change, as described in the Moosa model (1996). In that, arbitrageurs respond to the violation of the cost-of-carry condition and then speculators acting upon the expected spot price will revise their expectation. In the same way, speculators who act upon the expected futures price will revise their expectation and react to the disparity between current and expected futures prices. These conclusions, apart from offering a much better understanding of the dynamic linear and nonlinear relationships underlying the crude oil spot and futures markets, may have important implications for market efficiency. For instance, they may be useful in future research to quantify the process of market integration or may influence the greater predictability of these markets. An interesting subject for future research is the nature and source of the nonlinear causal linkages. As presented, volatility effects may partly account for nonlinear causality. The GARCH-BEKK model partially captured the nonlinearity in daily spot and future returns, but only in some cases. An explanation could be that spot and futures returns may exhibit statistically significant higher-order moments. A similar result was reported by Scheinkman and LeBaron, (1989) for stock returns. Alternatively, parameterized asymmetric multivariate GARCH models could be employed in order to accommodate the asymmetric impact of unconditional shocks on the conditional variances.