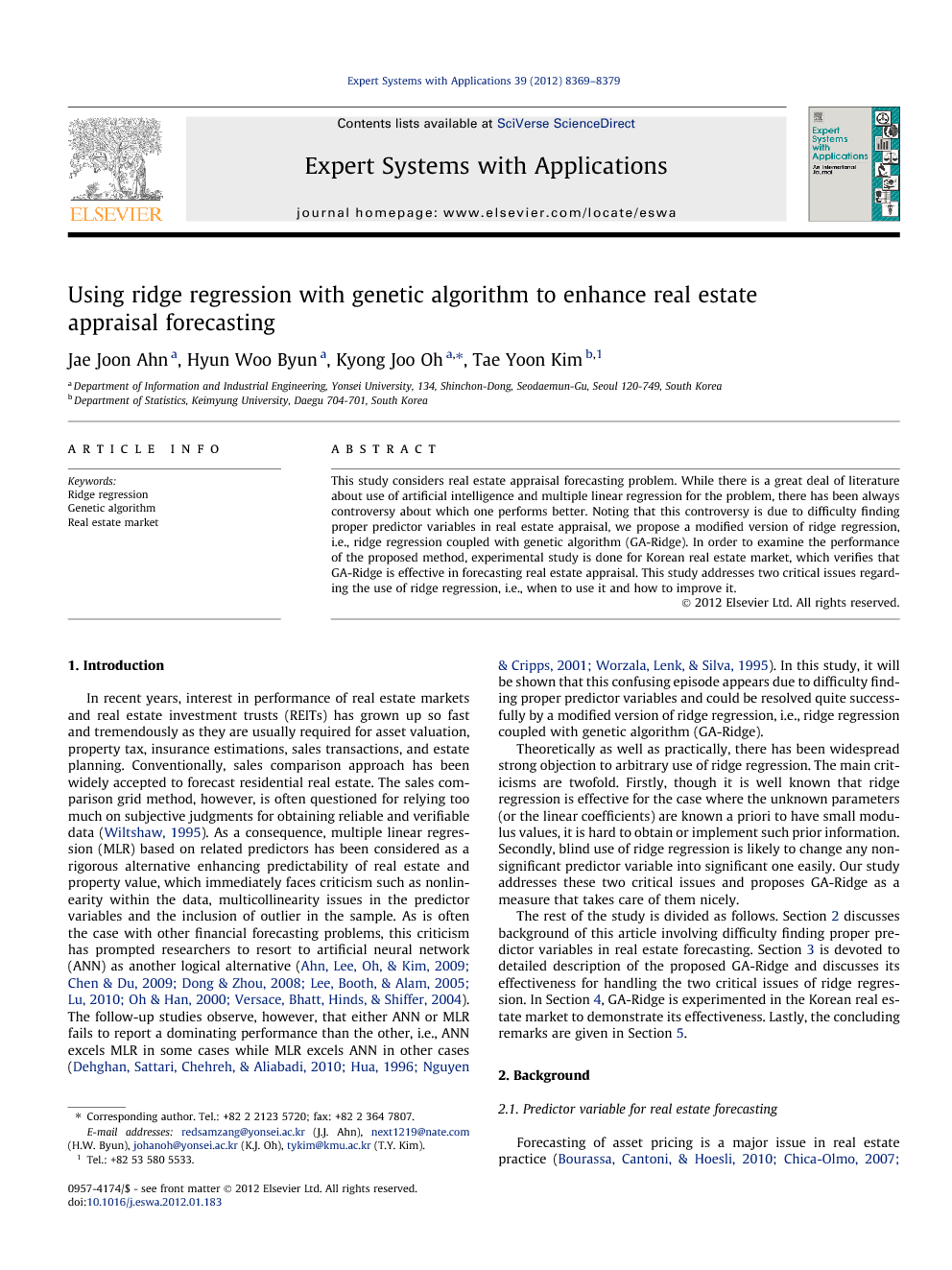 This study considers real estate appraisal forecasting problem. While there is a great deal of literature about use of artificial intelligence and multiple linear regression for the problem, there has been always controversy about which one performs better. Noting that this controversy is due to difficulty finding proper predictor variables in real estate appraisal, we propose a modified version of ridge regression, i.e., ridge regression coupled with genetic algorithm (GA-Ridge). In order to examine the performance of the proposed method, experimental study is done for Korean real estate market, which verifies that GA-Ridge is effective in forecasting real estate appraisal. This study addresses two critical issues regarding the use of ridge regression, i.e., when to use it and how to improve it.

In recent years, interest in performance of real estate markets and real estate investment trusts (REITs) has grown up so fast and tremendously as they are usually required for asset valuation, property tax, insurance estimations, sales transactions, and estate planning. Conventionally, sales comparison approach has been widely accepted to forecast residential real estate. The sales comparison grid method, however, is often questioned for relying too much on subjective judgments for obtaining reliable and verifiable data (Wiltshaw, 1995). As a consequence, multiple linear regression (MLR) based on related predictors has been considered as a rigorous alternative enhancing predictability of real estate and property value, which immediately faces criticism such as nonlinearity within the data, multicollinearity issues in the predictor variables and the inclusion of outlier in the sample. As is often the case with other financial forecasting problems, this criticism has prompted researchers to resort to artificial neural network (ANN) as another logical alternative (Ahn et al., 2009, Chen and Du, 2009, Dong and Zhou, 2008, Lee et al., 2005, Lu, 2010, Oh and Han, 2000 and Versace et al., 2004). The follow-up studies observe, however, that either ANN or MLR fails to report a dominating performance than the other, i.e., ANN excels MLR in some cases while MLR excels ANN in other cases (Dehghan et al., 2010, Hua, 1996, Nguyen and Cripps, 2001 and Worzala et al., 1995). In this study, it will be shown that this confusing episode appears due to difficulty finding proper predictor variables and could be resolved quite successfully by a modified version of ridge regression, i.e., ridge regression coupled with genetic algorithm (GA-Ridge). Theoretically as well as practically, there has been widespread strong objection to arbitrary use of ridge regression. The main criticisms are twofold. Firstly, though it is well known that ridge regression is effective for the case where the unknown parameters (or the linear coefficients) are known a priori to have small modulus values, it is hard to obtain or implement such prior information. Secondly, blind use of ridge regression is likely to change any non-significant predictor variable into significant one easily. Our study addresses these two critical issues and proposes GA-Ridge as a measure that takes care of them nicely. The rest of the study is divided as follows. Section 2 discusses background of this article involving difficulty finding proper predictor variables in real estate forecasting. Section 3 is devoted to detailed description of the proposed GA-Ridge and discusses its effectiveness for handling the two critical issues of ridge regression. In Section 4, GA-Ridge is experimented in the Korean real estate market to demonstrate its effectiveness. Lastly, the concluding remarks are given in Section 5.

We studied ridge regression as an alternative tool in real estate forecasting where one usually faces difficulty finding proper predictors. GA-Ridge is proposed here and its performance is examined against other forecasting methods. It is shown that GA is not only successful for real estate forecasting but also nicely settles critical issues in ridge regression. Experimental results are given for justification of GA-Ridge. It is noteworthy from the experimental results that GA-Ridge becomes a perfect solution particularly when a desirable predictor is hard to quantify but might be decomposed into various other predictors having less influence on response.