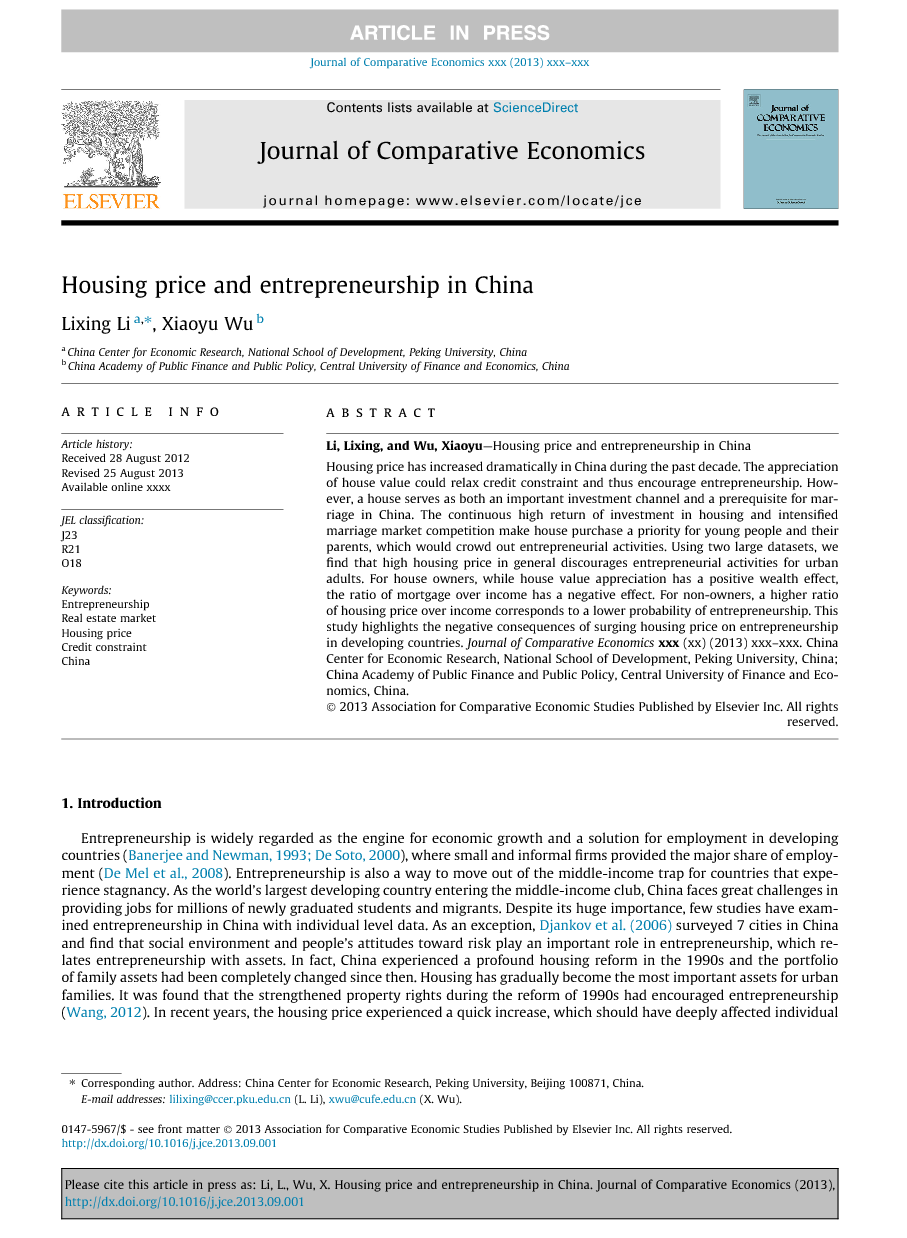 Housing price has increased dramatically in China during the past decade. The appreciation of house value could relax credit constraint and thus encourage entrepreneurship. However, a house serves as both an important investment channel and a prerequisite for marriage in China. The continuous high return of investment in housing and intensified marriage market competition make house purchase a priority for young people and their parents, which would crowd out entrepreneurial activities. Using two large datasets, we find that high housing price in general discourages entrepreneurial activities for urban adults. For house owners, while house value appreciation has a positive wealth effect, the ratio of mortgage over income has a negative effect. For non-owners, a higher ratio of housing price over income corresponds to a lower probability of entrepreneurship. This study highlights the negative consequences of surging housing price on entrepreneurship in developing countries.

Entrepreneurship is widely regarded as the engine for economic growth and a solution for employment in developing countries (Banerjee and Newman, 1993 and De Soto, 2000), where small and informal firms provided the major share of employment (De Mel et al., 2008). Entrepreneurship is also a way to move out of the middle-income trap for countries that experience stagnancy. As the world’s largest developing country entering the middle-income club, China faces great challenges in providing jobs for millions of newly graduated students and migrants. Despite its huge importance, few studies have examined entrepreneurship in China with individual level data. As an exception, Djankov et al. (2006) surveyed 7 cities in China and find that social environment and people’s attitudes toward risk play an important role in entrepreneurship, which relates entrepreneurship with assets. In fact, China experienced a profound housing reform in the 1990s and the portfolio of family assets had been completely changed since then. Housing has gradually become the most important assets for urban families. It was found that the strengthened property rights during the reform of 1990s had encouraged entrepreneurship (Wang, 2012). In recent years, the housing price experienced a quick increase, which should have deeply affected individual behaviors, including entrepreneurship. This paper intends to examine how the rising housing price affects people’s incentive to start their own business. Financial constraint creates barriers to entrepreneurship. Imperfections in the credit market could deter potential entrepreneurs to acquire necessary capital to start a business. Thus, the rising housing price has a positive wealth effect on entrepreneurship by increasing family resources and relaxing credit constraint. Most studies do find a positive relationship between wealth and business entry (Evans and Jovanovic, 1989, Hurst and Lusardi, 2004, Paulson and Townsend, 2004, Djankov et al., 2006, Fairlie and Krashinsky, 2012 and Wang, 2012). The increase in housing price and the consequent appreciation of family assets generally encourage entrepreneurship. However, rising housing price could also discourage entrepreneurial activities, because wealth is also correlated with risk preference, which clearly affects entrepreneurship. If richer people are more risk averse, we could observe a negative correlation between wealth and entrepreneurship. In addition, the property market and financial market in China are relatively under-developed. It is not easy for Chinese home owners to cash out the growth of the housing wealth for other investment purposes, unless they sell the house. Such institutional deficiency would negatively affect the amount of resources that could be mobilized from the real estate market to entrepreneurial activities. Thus the impact of rising housing price on entrepreneurship through the channel of relaxing credit constraints may not be the same as the U.S. and other developed countries (Deng et al., 2012). Overall, the direction of wealth effect in China would be ambiguous. More importantly, rising housing price increases the attractiveness of buying a house relative to starting a business in contemporary China for two reasons. First, after the continuous price increase in the past decade, people have gradually formed the belief that purchasing houses is one of the safest ways of investment. The return rate of buying a house exceeds most types of investment. In this sense, a prosperous real estate market may have a negative impact on entrepreneurship for people who have accumulated certain amount of wealth. Second, Chinese have a tradition of valuing house ownership,1 and house is one of most important “status” goods in China. For young men in both urban and rural areas, owning a house is usually a necessary condition for marriage. The competition in the marriage market was intensified by the changing population structure (Wei and Zhang, 2011a). According to a 2010 survey in Beijing, young people ranked marriage pressure the most important reason for buying a house.2 Recognizing that housing is a major cost associated with marriage and assuming that getting married is one of the most important goals for young people, an increase in housing price will encourage saving and discourage activities that could delay home ownership, including being an entrepreneur. In sum, a house serves as both an investment channel and a prerequisite for marriage in China. The rising price makes one more likely to buy a house as opposed to start a business when she or he has limited family resources. We would call this “crowd-out effect” in this paper. The ambiguity of wealth effect in theory and the importance of crowd-out effect in contemporary China inspire us to re-examine the effect of real estate price on entrepreneurship. The possibility that rising housing price could hurt individual’s incentive of entrepreneurship has largely been ignored in existing literature. In this paper, we extend previous research by studying the occupational choice of urban adults in the context of a booming real estate market in China. We examine the effect of not only housing price and its growth rate, but also house ownership, household wealth, and amount of mortgage payment as well. Using data from the 2005 China Inter-Census Population Survey, we find evidence that owning a house significantly decreases the probability to be an entrepreneur in urban China. People are less likely to start their own business in cities with a higher housing price. This result holds when we examine the rural area and impute the housing price with construction cost. People aged between 20 to 39 years old and those with very low education are more likely to be an entrepreneur. We further examine the effect of house ownership using data from the Chinese Family Panel Studies (CFPS) 2008–2010, which provides information on the amount of mortgage relative to income and wealth increase due to housing appreciation. We find that while household wealth has a positive effect, having mortgage decreases the probability to start one’s own business for house owners. The ratio of housing price relative to income decreases the likelihood of entrepreneurship. The remaining of this paper is organized as follows. Section 2 introduces the background of China’s real estate market and describes the rising trend of housing price. Section 3 discusses our data and empirical specification. Section 4 reports the results. Section 5 concludes.

This paper presents new evidence on the economic implications of a booming real estate market in developing countries. We examine how the rising housing price affects entrepreneurship in China. Using data from the 2005 China Inter-Census Population Survey and 2008–2010 Chinese Family Panel Studies, we find a significant wealth effect, which is consistent with existing literature. It suggests that credit constraint is important in individual’s entrepreneurial decisions.18 In addition, we find that the crowd-out effect of housing price on entrepreneurship is statistically significant and large. This result stands in contrast to what has been found in the literatures based on the U.S. experience (Hurst and Lusardi, 2004). Such a difference could be attributed to the institutional difference these two economies have, rather than from the general economic relationship. We further separate the sample into house owners and non-owners. For owners, while house value appreciation has a positive wealth effect, the ratio of mortgage over income has a negative effect. For those who do not own a house, a high ratio of city housing price over income discourages their entrepreneurial activities. China has become a country with one of the highest rates of home ownership in the world since the marketization of housing system in the 1990s. The housing price experienced a dramatic increase since then. Apart from its consequences on wealth distribution and inequality, the quick rise of housing price has other important implications on economic growth. This study highlights the potential large negative effect in terms of discouraging entrepreneurship.