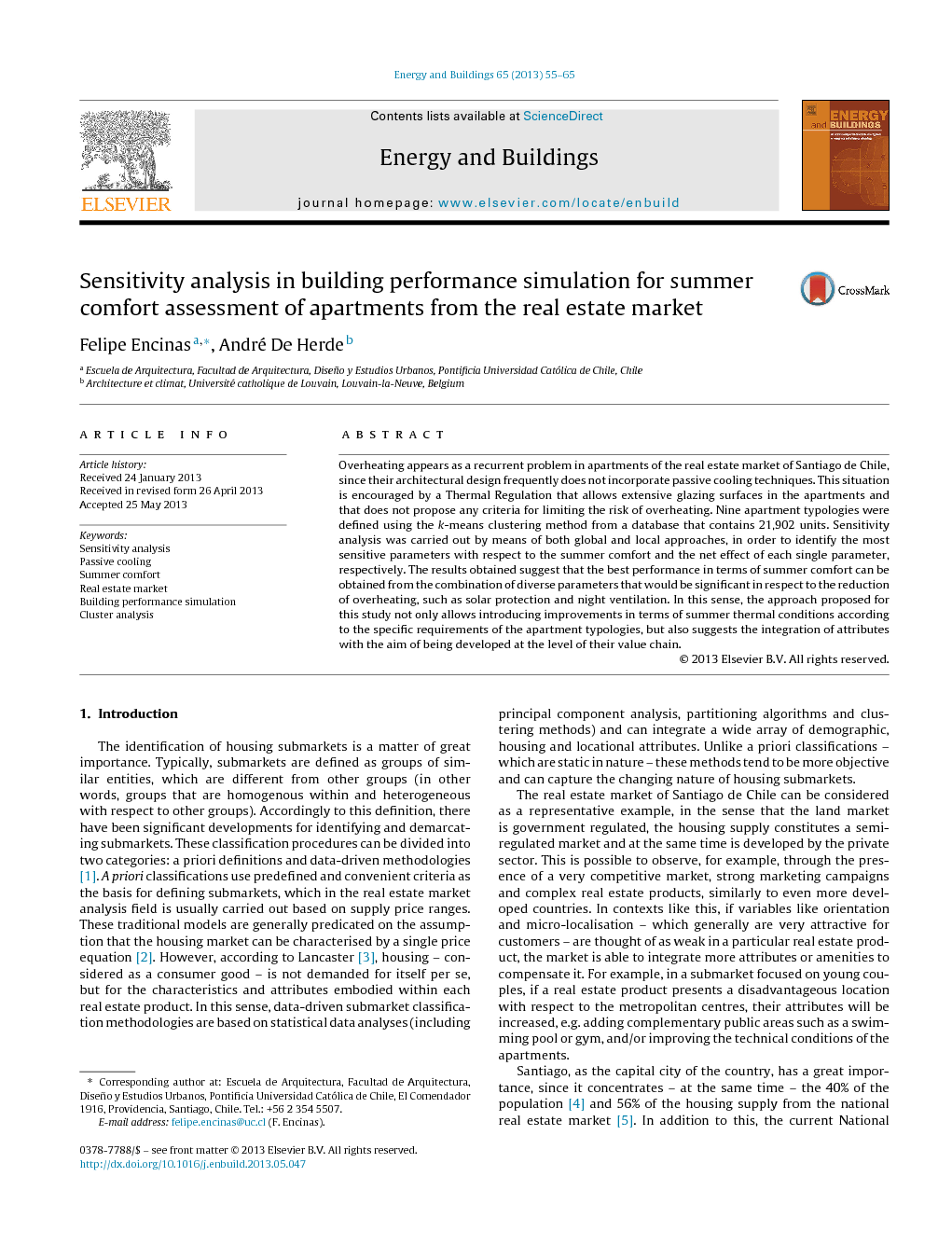 Overheating appears as a recurrent problem in apartments of the real estate market of Santiago de Chile, since their architectural design frequently does not incorporate passive cooling techniques. This situation is encouraged by a Thermal Regulation that allows extensive glazing surfaces in the apartments and that does not propose any criteria for limiting the risk of overheating. Nine apartment typologies were defined using the k-means clustering method from a database that contains 21,902 units. Sensitivity analysis was carried out by means of both global and local approaches, in order to identify the most sensitive parameters with respect to the summer comfort and the net effect of each single parameter, respectively. The results obtained suggest that the best performance in terms of summer comfort can be obtained from the combination of diverse parameters that would be significant in respect to the reduction of overheating, such as solar protection and night ventilation. In this sense, the approach proposed for this study not only allows introducing improvements in terms of summer thermal conditions according to the specific requirements of the apartment typologies, but also suggests the integration of attributes with the aim of being developed at the level of their value chain.

First of all, the Monte Carlo Analysis appears to be an appropriate tool to propagate uncertainty of the input parameters on the model output in the context of building performance simulation. This was observed by means of the application of a sensitivity analysis using the Latin Hypercube sampling (LHS) with the aim of assessing the summer comfort of apartments of the real estate market in Santiago de Chile (represented by their building typologies) and the possibilities to reduce the risk of overheating by means of passive cooling techniques. This kind of analysis corresponds to the probabilistic approach, where the parameters quantification requires not only an assessment of the point estimate – as the case of the deterministic approach – but also an assessment of the uncertainty. This point of view appears as particularly appropriate when the analysis is focused on a cluster of cases instead of a single building case. For the purposes of this study, passive cooling strategies that depend on the architectural design and/or the occupants’ behaviour were studied. In this sense, from a total of six input parameters, a sample matrix of 140 trials was defined, which was simulated by apartment typology using the TAS dynamic-state building performance software. This analysis was carried out by means of both global and local sensitivity approaches, in order to provide information about the most sensitive input parameters with respect to the summer comfort of apartments and the net effect of each single input parameter when they are evaluated in turn, respectively. As the representative apartments of the building typologies were defined from the centroids of the continuous variables of each one, it is expected that their results – as a whole – can be representative of the real estate market of apartments in Santiago de Chile. As this case can be considered as a representative example of competitive real estate markets – similarly to even more developed countries – the proposed methodology may be extensive to other contexts. However, at least for the particular case of Santiago, the presence of solar protection devices represents a high priority, which is especially noticeable in the case of living rooms, due to their extensive glazing surfaces. Night ventilation, also, constitutes a very significant input parameter for all the spaces, especially for the bedrooms, which – in general – may present a higher potential of night ventilation in comparison to the living rooms. These results suggest that the best performance in terms of summer comfort can be obtained by the combination of diverse input parameters that would be significant with respect to the reduction of the risk of overheating. In this sense, the performed local sensitivity analysis, based in an OAT (one-at-a-time) design, proposes five categories of summer with the aim of supporting decision-makers (such as architects and real estate developers) in the definition of the most appropriate combination of passive cooling techniques. The results in line with these categories of summer comfort are represented by graphs in the form of abacuses for each room by apartment typology. It is clear that this kind of considerations can help architects to make decisions about design criteria (such as the size and orientation of the different rooms, the window-to-wall ratio and the balcony's design) in order to obtain the best summer comfort conditions as possible. Since in the current real estate market in Santiago, solar protection devices are not frequently incorporated in the supply of apartments, these results also encourage the incorporation of solar protection in the architectural project (and not as a post-occupancy decision), which can be important not only for architects, but also for real estate developers. However, probably the most important conclusion is that it is possible to obtain adequate summer comfort conditions (e.g. expressed by the proposed categories A or B) and avoid the use of air conditioning in practically all the apartments of the real estate market of Santiago de Chile by means of the combined application of passive cooling techniques, such as solar protection and night ventilation. In this context, the methodology proposed for this study not only allows introducing improvements in terms of summer thermal conditions according to the specific requirements of the apartment typologies identified, but also suggests the integration of a series of attributes, such as the incorporation of solar protection devices, with the aim of being developed at the level of their value chain.