عنوان انگلیسی
House prices and birth rates: The impact of the real estate market on the decision to have a baby
دانلود فوری مقاله + سفارش ترجمه 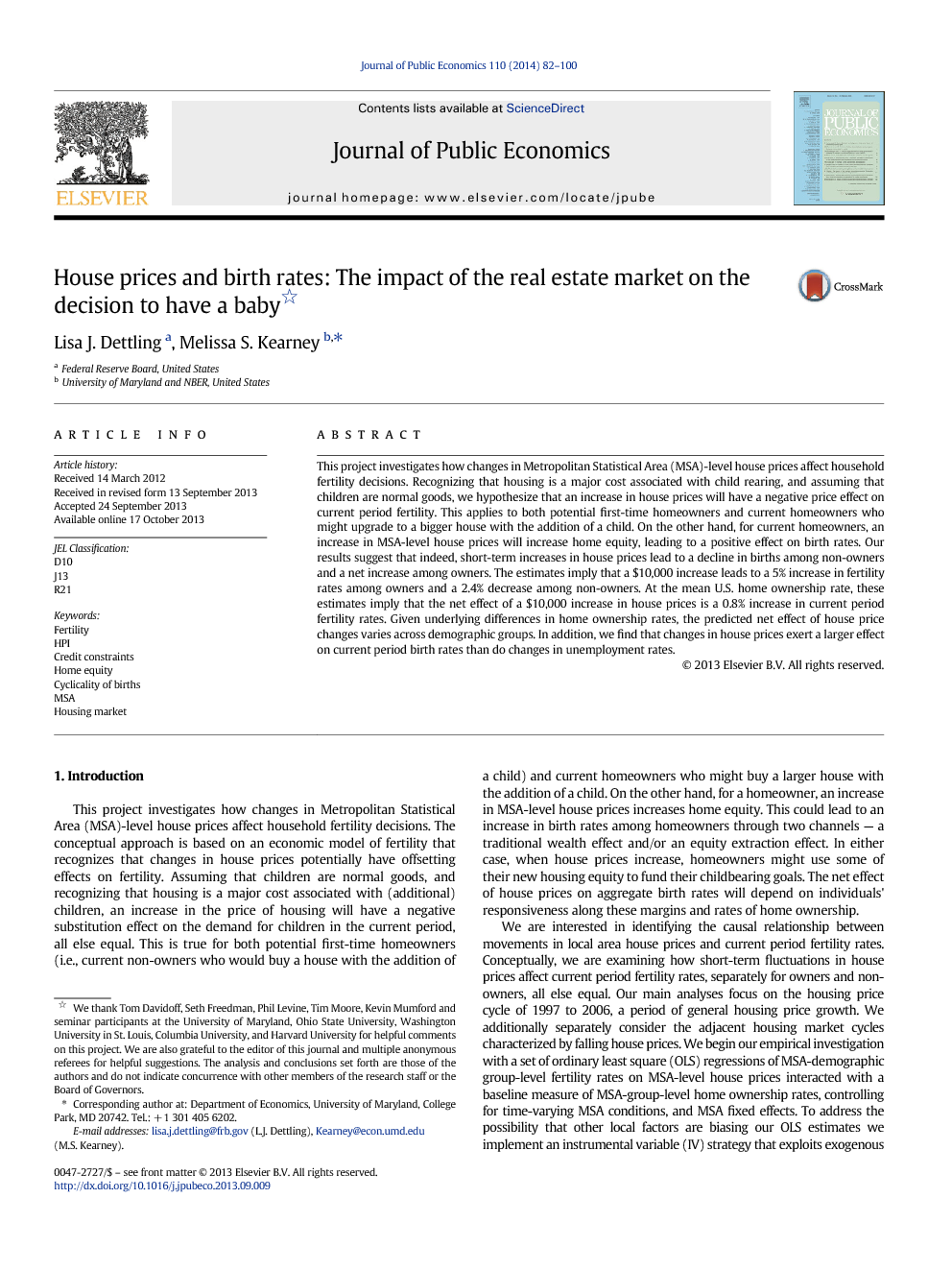 This project investigates how changes in Metropolitan Statistical Area (MSA)-level house prices affect household fertility decisions. Recognizing that housing is a major cost associated with child rearing, and assuming that children are normal goods, we hypothesize that an increase in house prices will have a negative price effect on current period fertility. This applies to both potential first-time homeowners and current homeowners who might upgrade to a bigger house with the addition of a child. On the other hand, for current homeowners, an increase in MSA-level house prices will increase home equity, leading to a positive effect on birth rates. Our results suggest that indeed, short-term increases in house prices lead to a decline in births among non-owners and a net increase among owners. The estimates imply that a $10,000 increase leads to a 5% increase in fertility rates among owners and a 2.4% decrease among non-owners. At the mean U.S. home ownership rate, these estimates imply that the net effect of a $10,000 increase in house prices is a 0.8% increase in current period fertility rates. Given underlying differences in home ownership rates, the predicted net effect of house price changes varies across demographic groups. In addition, we find that changes in house prices exert a larger effect on current period birth rates than do changes in unemployment rates.

This project investigates how changes in Metropolitan Statistical Area (MSA)-level house prices affect household fertility decisions. The conceptual approach is based on an economic model of fertility that recognizes that changes in house prices potentially have offsetting effects on fertility. Assuming that children are normal goods, and recognizing that housing is a major cost associated with (additional) children, an increase in the price of housing will have a negative substitution effect on the demand for children in the current period, all else equal. This is true for both potential first-time homeowners (i.e., current non-owners who would buy a house with the addition of a child) and current homeowners who might buy a larger house with the addition of a child. On the other hand, for a homeowner, an increase in MSA-level house prices increases home equity. This could lead to an increase in birth rates among homeowners through two channels — a traditional wealth effect and/or an equity extraction effect. In either case, when house prices increase, homeowners might use some of their new housing equity to fund their childbearing goals. The net effect of house prices on aggregate birth rates will depend on individuals' responsiveness along these margins and rates of home ownership. We are interested in identifying the causal relationship between movements in local area house prices and current period fertility rates. Conceptually, we are examining how short-term fluctuations in house prices affect current period fertility rates, separately for owners and non-owners, all else equal. Our main analyses focus on the housing price cycle of 1997 to 2006, a period of general housing price growth. We additionally separately consider the adjacent housing market cycles characterized by falling house prices. We begin our empirical investigation with a set of ordinary least square (OLS) regressions of MSA-demographic group-level fertility rates on MSA-level house prices interacted with a baseline measure of MSA-group-level home ownership rates, controlling for time-varying MSA conditions, and MSA fixed effects. To address the possibility that other local factors are biasing our OLS estimates we implement an instrumental variable (IV) strategy that exploits exogenous variation in house price movements induced by variation across MSAs in their housing supply elasticity, as measured by Saiz (2010). Both OLS and IV results indicate that as the proportion of individuals in a demographic cell who are home owners increases, an increase in house prices is conditionally associated with an increase in current period fertility rates. This is consistent with a positive “home equity effect” that dominates any negative price effect. The data also indicate that as the proportion of homeowners approaches zero, an increase in MSA-level house prices leads to a decrease in current period fertility rates, which is consistent with a negative price effect among non-owners. In general, the main results hold across race/ethnic groups and are equally driven by first, second, and higher-parity births. These main results are statistically significant and economically meaningful. Employing our regression estimates in a straightforward simulation exercise, we find that a $10,000 increase in house prices is associated with a 5% increase in fertility rates in MSA cells with 100% ownership rates. For MSA cells with zero percent home ownership rates, we estimate a corresponding decrease in fertility rates of 2.4%. For an MSA-group, as the home ownership rates increase from 30 to 40%, the net effect of a $10,000 increase in house prices becomes positive. Under the assumption of linear effects, these estimates suggest that all else held constant, the roughly $108,000 average increase in house prices during the housing boom of 1997 to 2006 would have led to a 9% increase in births over that time.1 The main contribution of the paper is to provide an empirical examination of how aggregate movements in house prices affect aggregate level birth rates. First, as an issue of economic demography, it is informative to understand how movements in the real estate market affect current period birth rates, overall and for various demographic subgroups. Second, within the research literature on the nature of the demand for children, an examination of the effect of house prices on the fertility outcomes of homeowners constitutes a useful test of wealth effects. Third, our paper highlights the importance of including housing markets in any model of how economic conditions affect fertility outcomes. In fact, as an empirical matter, we find that changes in house prices exert a larger effect on current period birth rates than do changes in unemployment rates. Fourth, our results potentially speak to the role of credit constraints, and imperfect capital markets, in affecting the timing of fertility decisions. This is an issue that features prominently in the literature on the cyclicality of fertility timing, as reviewed in Hotz et al. (1997). Our finding of a positive effect among home owners suggests that some individuals may consume out of home equity to fund their childbearing goals. And finally, there is a literature on the tendency of individuals to consume out of housing wealth. To our knowledge, that literature has not previously considered children as a potential “consumption” good in this regard. Our results provide clear empirical support for the idea that house prices impact birth rates in a statistically significant and economically meaningful way.

This paper has investigated how current house prices affect current period birth rates. Our results suggest that house prices are a relevant factor in a couple's decision to have a baby at the present time. House prices lead to a negative price effect that conditionally reduces birth rates in the current period, and an offsetting positive home equity effect that leads to a net increase in births among homeowners. We use the estimated coefficients from our regression analyses to simulate the effect of a $10,000 increase in house prices on current year births. This exercise indicates that when home ownership rates reach 30%, the net effect becomes positive. At the mean U.S. home ownership in our sample period, the net effect of a $10,000 increase in prices is a 0.8% increase in births. Given underlying differences in home ownership rates and heterogeneity in the point estimates, the predicted net effect of house price changes varies across race/ethnic groups. We simulate that a $10,000 increase in MSA-level house prices leads to a 0.7% increase in current year births among Whites, a 0.2% increase in births among Blacks, and a 0.2% decrease in births among white Hispanics. Interestingly, these effects are substantially larger than the effects of changes in the unemployment rate. Moreover, using our estimates to make an out-of-sample prediction of the impact of the “Great Recession”, we find that the fall in housing prices between 2006 and 2010 was associated with a 7.5% decline in births. Our paper is written within the paradigm of the empirical literature on the cyclicality of fertility and as such, it is about the timing of fertility decisions. The evidence presented in our paper suggests that couples use some of their increased housing wealth to “fund” their childbearing goals. Our paper potentially demonstrates empirically that (imperfect) credit markets affect fertility timing. We have discussed our results in terms of the decision of whether or not to have a baby in the current period. We leave it to future research to investigate how house prices affect completed fertility or the demand for children more generally. In addition, it might also be true that when house prices increase or decrease, parents increase (or decrease) quality investments in children, where quality of children is meant in the Beckerian sense. For example, perhaps some home-owning parents use their increased home equity to purchase, say, private education for their children. Once we allow for this possibility, it becomes clear that our empirical analysis is not designed to capture the full range of how real estate markets might affect childbearing and child rearing decisions.