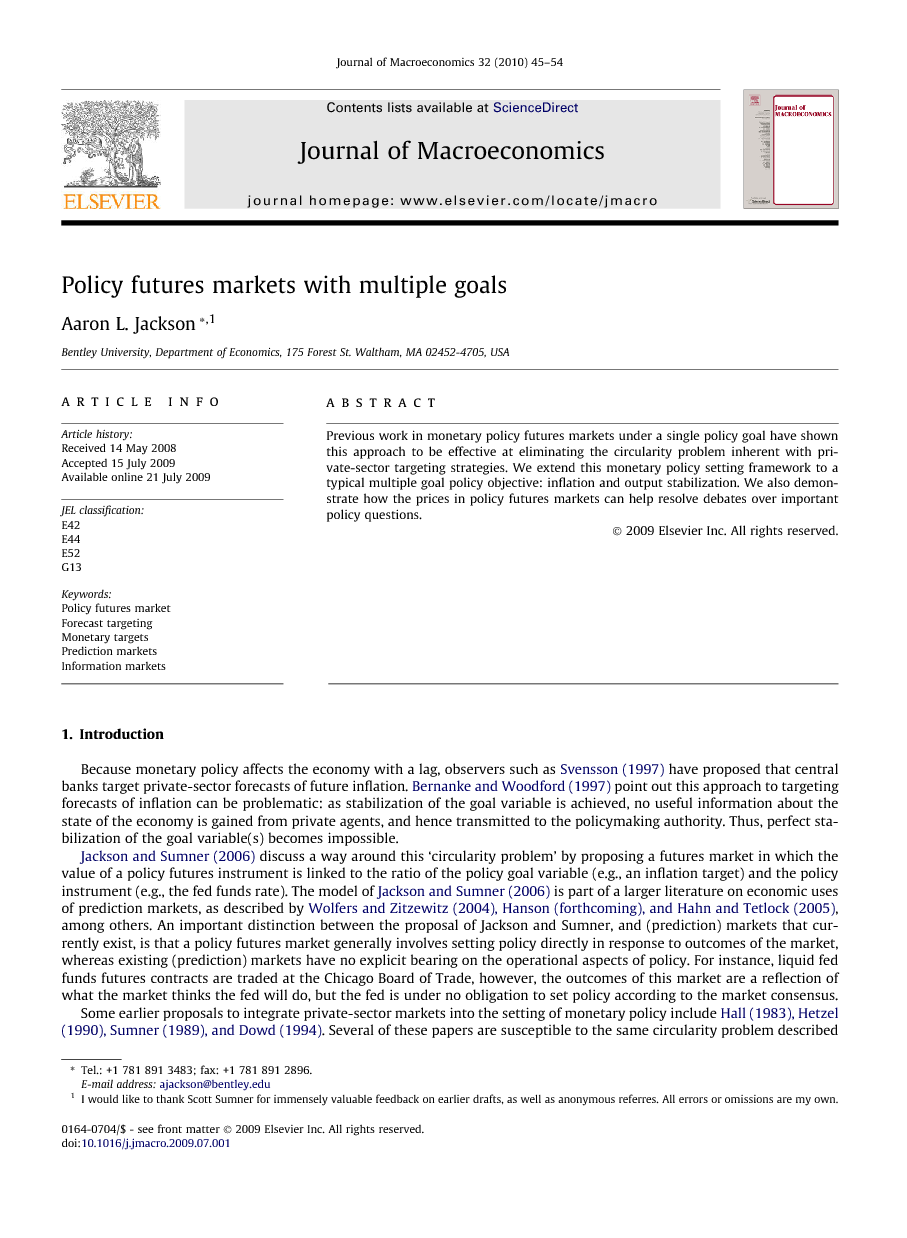 Previous work in monetary policy futures markets under a single policy goal have shown this approach to be effective at eliminating the circularity problem inherent with private-sector targeting strategies. We extend this monetary policy setting framework to a typical multiple goal policy objective: inflation and output stabilization. We also demonstrate how the prices in policy futures markets can help resolve debates over important policy questions.

Because monetary policy affects the economy with a lag, observers such as Svensson (1997) have proposed that central banks target private-sector forecasts of future inflation. Bernanke and Woodford (1997) point out this approach to targeting forecasts of inflation can be problematic: as stabilization of the goal variable is achieved, no useful information about the state of the economy is gained from private agents, and hence transmitted to the policymaking authority. Thus, perfect stabilization of the goal variable(s) becomes impossible. Jackson and Sumner (2006) discuss a way around this ‘circularity problem’ by proposing a futures market in which the value of a policy futures instrument is linked to the ratio of the policy goal variable (e.g., an inflation target) and the policy instrument (e.g., the fed funds rate). The model of Jackson and Sumner (2006) is part of a larger literature on economic uses of prediction markets, as described by Wolfers and Zitzewitz, 2004, Hanson, forthcoming and Hahn and Tetlock, 2005, among others. An important distinction between the proposal of Jackson and Sumner, and (prediction) markets that currently exist, is that a policy futures market generally involves setting policy directly in response to outcomes of the market, whereas existing (prediction) markets have no explicit bearing on the operational aspects of policy. For instance, liquid fed funds futures contracts are traded at the Chicago Board of Trade, however, the outcomes of this market are a reflection of what the market thinks the fed will do, but the fed is under no obligation to set policy according to the market consensus. Some earlier proposals to integrate private-sector markets into the setting of monetary policy include Hall, 1983, Hetzel, 1990, Sumner, 1989 and Dowd, 1994. Several of these papers are susceptible to the same circularity problem described above. These four proposals all focused on singular nominal targets, usually some measure of either the price level, inflation rate, or nominal GNP. As demonstrated in this paper, in addition to addressing the circularity problem, we consider multiple targets, including stabilization of real variables. Recent innovative proposals for the use of futures markets to guide policy include Sumner (2006), who investigates the feasibility of extending the Federal Open Market Committee to the public, and Jackson and Sumner’s (2009) proposal of using policy futures markets as a guide to global warming policy. Perhaps the most well-known attempt to use futures markets to guide policy is the US Defense Department’s proposal in 2003 of a Policy Analysis Market (PAM), which was designed to elicit information about geopolitical risk among Middle Eastern countries. It was highly controversial due to the widely held view that traders would be ‘profiting from terrorism’, and as a result was abandoned for political reasons. Setting monetary policy according to the outcomes of a policy futures market has the advantages of transparency, as in a forecast targeting regime, efficiency in terms of aggregating and disseminating useful information, as well as simplicity: a credible central bank or policy setting authority simply sets policy based on realizations of futures market trading to achieve its stated goal. Policy futures traders using rational expectations provide an explicit forecast of the futures price, and an implicit forecast of the instrument. For monetary policy regimes that have the singular goal of strict inflation targeting with little or no regard to cyclical variation in real activity, such as the Reserve Bank of New Zealand, an approach utilizing a policy futures market may be an innovative opportunity to gain further transparency and credibility for maintaining a nominal anchor. However, many central banks, even those with explicit inflation targets, attempt to stabilize competing goal variables to varying degrees, most commonly the dual goals of inflation and output stabilization. The policy futures market proposed by Jackson and Sumner analyzes only singular nominal targets and therefore ignores the practical concerns that most central banks would have under such a monetary regime. Indeed, in the context of a central bank’s loss function, that paper analyzes only the special case where the implied weight on output stabilization in the central bank’s loss function is zero. As Cecchetti and Ehrmann (1999) find, there is considerable variation in the weight on inflation stabilization relative to output stabilization among central banks around the world, and most central banks (even among apparently ‘strict’ inflation targeters) choose to pay at least modest attention to output variability. Thus, in order for a monetary policy futures market to be considered practical as a policy framework, it needs to be demonstrated that such a regime can meet multiple policy objectives. Note that this is distinctly different from the debate over which policy goal or goals are best suited to enhance an economy’s welfare (i.e., an inflation target, or a dual mandate as in the US). This paper takes no formal stand over this debate, however, it is demonstrated that such a monetary policy futures market could be useful in framing such a debate. Rather, the main concern in this paper is how central banks can most effectively use its resources to achieve those goals. We address this concern by formalizing such a policymaking regime. In the next section we discuss the literature on private-sector forecast targeting, and the related literature on using prediction markets for policy purposes. In Section 3 we extend the framework of Jackson and Sumner (2006) to include a central bank pursuing multiple policy objectives, and in Section 4 show how such a market could be useful in resolving important academic policy debates. Concluding remarks then follow.

In the introduction to McCallum and Nelson (1999), the authors emphasize two key characteristics monetary policy should possess: operationality and robustness. An appropriately designed policy futures market can meet both these objectives, making it a particularly appealing alternative to monetary policy based on traditional structural macromodels and policy by committee. We improve upon the approach of Jackson and Sumner (2006) by considering a central bank that is interested in the dual goals of inflation and output stabilization as a policy objective. Equivalence between a policy futures regime and a central bank with perfect information is established. Moreover, the conclusion that the policy futures market achieves the theoretical minimum variance is preserved (given its preferences over inflation and output). These results demonstrate that such a policy regime is flexible enough to accommodate most practical monetary policy objectives, without the need for extensive information gathering by the central bank or reliance on a structural model to implement policy. Finally, we address the intriguing potential for policy futures markets to weigh in on policy questions traditionally relegated to academia. If markets are efficient, the answers to important policy questions may be implicitly imbedded in the prices of appropriately designed policy futures. The literature on prediction market efficacy would indicate that participants in such policy futures markets need not necessarily be considered ‘experts’ to provide valuable information on the appropriateness or merits of policy. Indeed, a diversity of opinion seems to be the primary mechanism which makes these markets more accurate than expert views. In considering such innovative monetary policy changes, one should keep in mind that economists at one time were generally opposed to now widely-accepted policy arrangements such as currency unions and inflation targeting. Given the continued interest expressed by prominent economists such as Bernanke (2007) and Mankiw (2006) in integrating the privatesector into the policy process, it is apparent that we are already moving in the direction of such a policy regime. Although economists may not yet be willing to trade in their ivory towers for a margin account, the informative potential for properly designed prediction markets as a guide to policy seems unlimited.