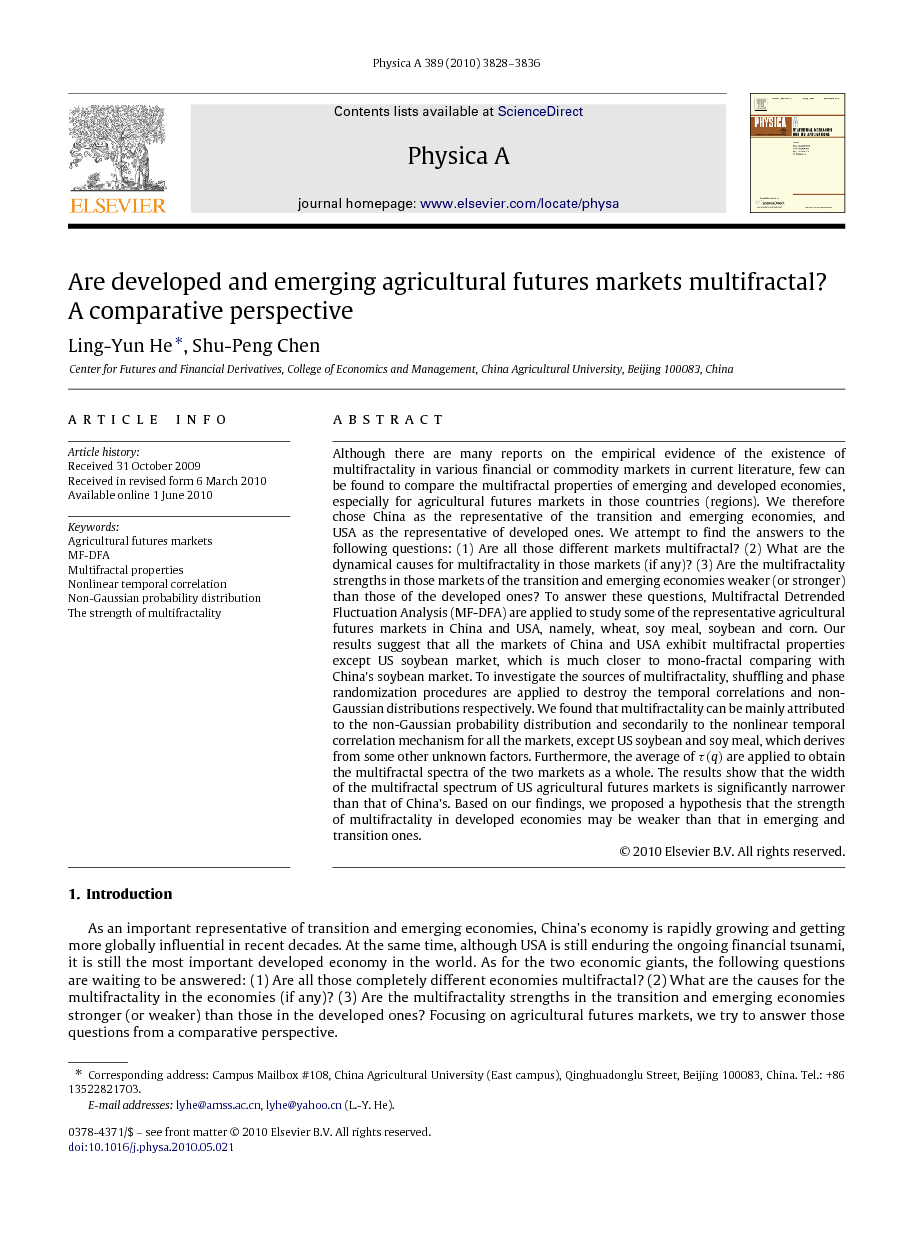 Although there are many reports on the empirical evidence of the existence of multifractality in various financial or commodity markets in current literature, few can be found to compare the multifractal properties of emerging and developed economies, especially for agricultural futures markets in those countries (regions). We therefore chose China as the representative of the transition and emerging economies, and USA as the representative of developed ones. We attempt to find the answers to the following questions: (1) Are all those different markets multifractal? (2) What are the dynamical causes for multifractality in those markets (if any)? (3) Are the multifractality strengths in those markets of the transition and emerging economies weaker (or stronger) than those of the developed ones? To answer these questions, Multifractal Detrended Fluctuation Analysis (MF-DFA) are applied to study some of the representative agricultural futures markets in China and USA, namely, wheat, soy meal, soybean and corn. Our results suggest that all the markets of China and USA exhibit multifractal properties except US soybean market, which is much closer to mono-fractal comparing with China’s soybean market. To investigate the sources of multifractality, shuffling and phase randomization procedures are applied to destroy the temporal correlations and non-Gaussian distributions respectively. We found that multifractality can be mainly attributed to the non-Gaussian probability distribution and secondarily to the nonlinear temporal correlation mechanism for all the markets, except US soybean and soy meal, which derives from some other unknown factors. Furthermore, the average of τ(q)τ(q) are applied to obtain the multifractal spectra of the two markets as a whole. The results show that the width of the multifractal spectrum of US agricultural futures markets is significantly narrower than that of China’s. Based on our findings, we proposed a hypothesis that the strength of multifractality in developed economies may be weaker than that in emerging and transition ones.

In this article, we investigated the multifractal properties in China's and US agricultural futures markets from the comparative perspective. Our nontrivial empirical findings can be summarized as follows: First of all, multifractality is found in all those markets except the US soybean market, which is much closer to monofractal. Secondly, non-Gaussian distribution constitutes the major contribution in multifractality formation and nonlinear temporal correlation also has impact on the markets, expect US soybean and soy meal market, which may be influenced by some other unknown factors. Thirdly, the width of multifractal spectrum of US agricultural futures markets as a whole is significantly narrower than that of China's. Of course, there are still some questions waiting to be answered in our future works: are there any more causes of multifractality in the analyzed markets along with nonlinear temporal correlation and non-Gaussian distribution, especially for the case of US soy meal market? Is our hypothesis valid for other cases? Many other pieces of further empirical evidence and theoretical proofs are needed from other commodity or financial markets in more emerging or transition economies.