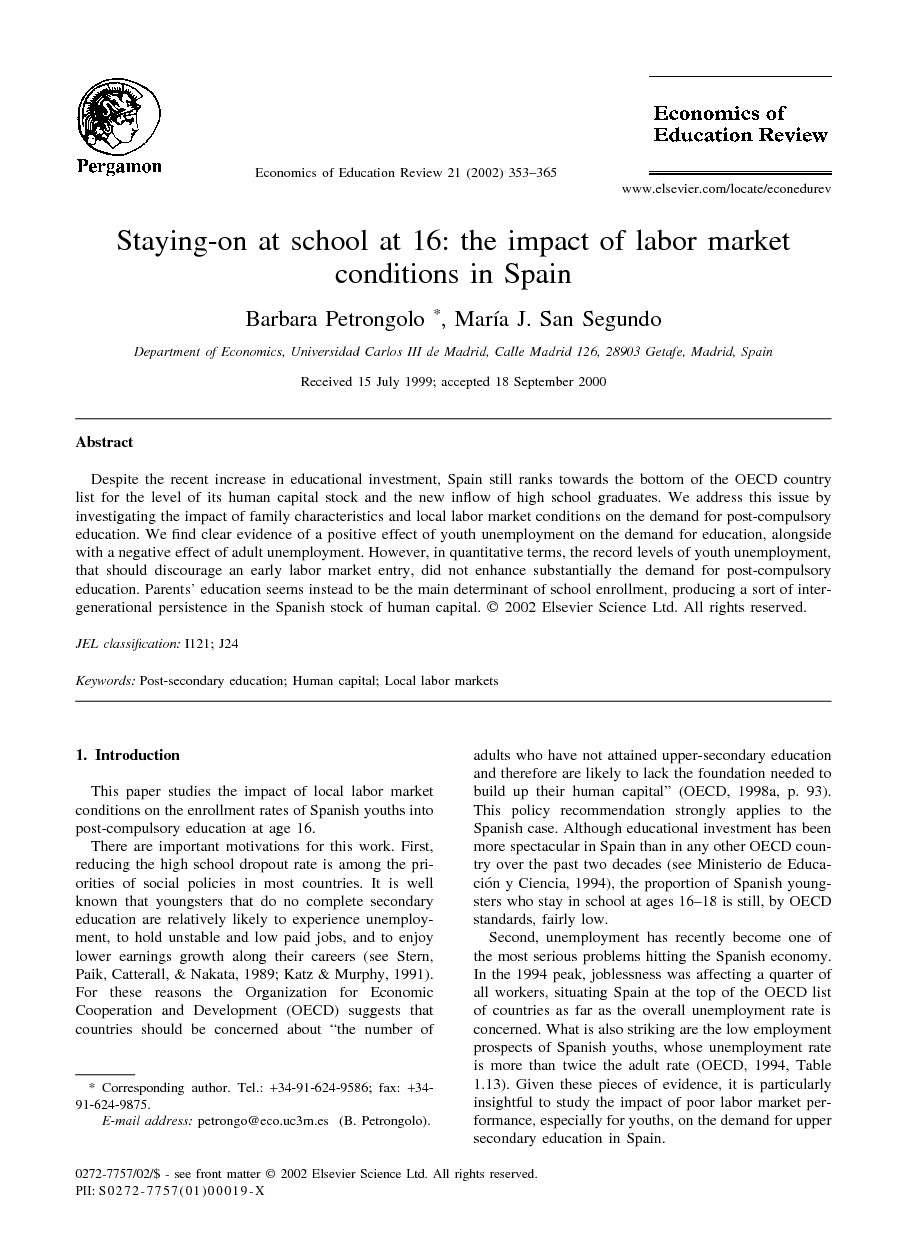 Despite the recent increase in educational investment, Spain still ranks towards the bottom of the OECD country list for the level of its human capital stock and the new inflow of high school graduates. We address this issue by investigating the impact of family characteristics and local labor market conditions on the demand for post-compulsory education. We find clear evidence of a positive effect of youth unemployment on the demand for education, alongside with a negative effect of adult unemployment. However, in quantitative terms, the record levels of youth unemployment, that should discourage an early labor market entry, did not enhance substantially the demand for post-compulsory education. Parents' education seems instead to be the main determinant of school enrollment, producing a sort of inter-generational persistence in the Spanish stock of human capital.

Completion of upper secondary education (until the age of 18) is becoming the norm in OECD countries (see OECD, 1997 and OECD, 1998b). If Spain does not wish to deviate from this norm, effort should be made in order to encourage youngsters to stay-on at school longer. This paper empirically investigates the impact of family characteristics and local labor market conditions on the demand for upper secondary education at the age of 16. The decision to undertake post-compulsory education is influenced greatly by the cultural and social background of the household, with a substantial impact of parental education level on the demand for schooling. We also found evidence that secondary school students base their decisions regarding post-compulsory education on local unemployment rates. The direction of these effects is clearly in line with the human capital theory for the demand for education. An increase in youth unemployment raises school enrollment, due to the reduction in the opportunity cost of schooling. An increase in the overall rate of unemployment reduces instead enrollment rates, insofar it proxies more pessimistic employment prospects for the future and thus lower returns to schooling. Additionally, the relationship between enrollment rates and adult unemployment may capture the effect of tighter budget constraints in high unemployment areas. In general, we can conclude that high youth unemployment rates may have made some contribution to the rise in upper secondary enrollment in Spain. However, the main determinant of the decision to stay on at school beyond the age of 16 seems to be the educational level of parents. Further public effort may therefore be required to contrast such an inter-generational persistence in educational investment. Policies that increase the educational investment of a generation would in fact appear to have long-lasting effects on the future accumulation of human capital by younger cohorts.