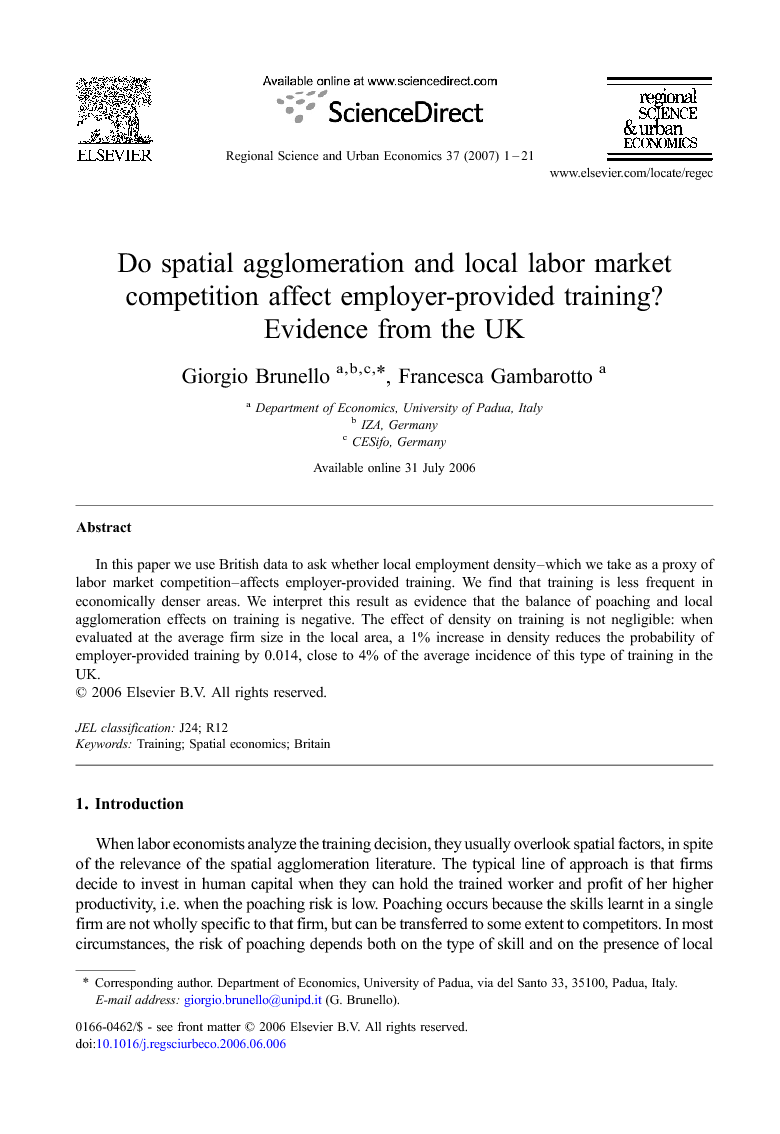 In this paper we use British data to ask whether local employment density–which we take as a proxy of labor market competition–affects employer-provided training. We find that training is less frequent in economically denser areas. We interpret this result as evidence that the balance of poaching and local agglomeration effects on training is negative. The effect of density on training is not negligible: when evaluated at the average firm size in the local area, a 1% increase in density reduces the probability of employer-provided training by 0.014, close to 4% of the average incidence of this type of training in the UK.

When labor economists analyze the training decision, they usually overlook spatial factors, in spite of the relevance of the spatial agglomeration literature. The typical line of approach is that firms decide to invest in human capital when they can hold the trained worker and profit of her higher productivity, i.e. when the poaching risk is low. Poaching occurs because the skills learnt in a single firm are not wholly specific to that firm, but can be transferred to some extent to competitors. In most circumstances, the risk of poaching depends both on the type of skill and on the presence of local competitors, who can find it profitable to hire the trained employee. If competitors are located far away, however, some workers may be discouraged by the expected mobility costs. If we take a local labor market perspective, it is clear that dense labor markets, with more workers and more firms, present better opportunities to locate a better job than sparse labor markets. The higher risk of poaching typical of denser areas implies that firms located in these areas face an uncertain return to training and tends to under-invest in human capital. At the same time, however, we recognize that local density can also affect positively the training decisions of employers. When skills and technical knowledge are complements, trained workers, who are more capable of exploiting the positive spillovers associated to spatial proximity, are more productive in agglomerated areas. In imperfectly competitive labor markets, this productivity premium can translate into higher marginal benefits of training if it is not fully absorbed by higher wages. It follows that firms located in denser areas, when deciding whether and how much to train their employees, need to take into account the effects of the higher risk of poaching and the effects associated to the complementarity of skills and local knowledge spillovers. When we compare similar firms in local labor markets with different density, employer-provided training incidence can be higher, or lower, in denser areas, depending on the direction and relative weight of these effects. This paper is an empirical investigation of the relationship between local economic density and employer-provided training in British Nuts 2 groups of counties, based on longitudinal BHPS (British Household Panel Survey) data for the period 1994–20001. While we are not aware of other empirical studies which address the same issue2, our research is related to the growing number of studies which investigate the relationship between local economic density and productivity, starting with Ciccone and Hall (1996). This literature focuses mainly on knowledge spillovers and pecuniary externalities as key ingredients of local economic growth, but pays little attention to the potential link between agglomeration and productivity induced by the effects of local labor market competition on the incentives to train. Suppose that more local competition significantly affects the provision of training by firms. Since training is expected to increase productivity, the uncovered relationship between agglomeration and productivity across local areas could be partly driven by differences in the incentives to invest in the production of skills. We investigate this link, and find evidence that employer-provided training is lower in denser areas, which we take to suggest that the relationship between agglomeration and productivity would be even stronger were it not for the negative impact of density on training. The data show that the incidence of employer-provided training varies significantly across British local labor markets. Regions with higher than average training levels are mainly urban areas: Greater London, the South East (Essex, Kent, Brighton) and the South West (Southampton, Oxford), the regions of Manchester and the West Midlands. Fig. 1 plots training incidence against employment density in each area, measured as the log of the number of employees in the private sector per squared kilometer. Density is a measure of spatial proximity, and has been used by Ciccone and Hall (1996), to capture the positive pooling externalities associated to close and repeated interactions among economic agents. Inspection of the figure does not reveal any clear pattern, but obviously a significant relationship could be obscured by the presence of numerous confounding effects, such as the industrial and occupational composition of labor, the average level of educational attainment and else.The paper is organized as follows. Section 1 contains a brief summary of the relevant literature, with special emphasis on agglomeration effects. Section 2 discusses the relationship between pooling and poaching effects and employer-provided training in local labor markets. Section 3 presents the empirical specification and Section 4 illustrates the data. The last two sections discuss the main results and some robustness exercises. Conclusions follow.

The key finding of this paper is that employer-provided training in the UK is less frequent in economically denser areas. We have explained this result by arguing that poaching and turnover effects of agglomeration prevail on pooling effects. The size of their effect is not negligible: when evaluated at the average firm size in the area, a 1% increase in density reduces the probability of employer-provided training by 0.014, close to 4% of the average incidence of training in the UK during the sample period. In a well-known paper, Ciccone and Hall (1996) find that higher density increases average productivity in the area by 5%. Our results suggest that this effect could have been even higher were it not for the negative impact of density on employer-provided training. Higher density affects productivity both directly, by facilitating the creation and diffusion of innovation, and indirectly, by affecting the composition of labor in the local area. Denser areas attract individuals with higher education, who are more productive and learn new skills faster. Faster learning encourages training. The same areas, however, are characterized by higher labor mobility, which reduces the incentive of firms to train. Overall, productivity can be higher in denser areas despite the fact that employer-provided training is lower.